Like an episode of Game of Thrones, Australia finds itself with its fourth Prime Minister since 2013.

There has only had one election in that time, but Australia has again found history repeating itself with a late-night leadership ballot between sitting Prime Minister Tony Abbott and Communications Minister Malcolm Turnball, who has resigned in order to challenge the PM.

Abbott, who has been suffering from low poll ratings, lost the vote 44 to Turnball’s 54, becoming the third successive Prime Minister to not serve a full term. It’s not the first time Turnball and Abbott have faced each other, nor is it the first time the Australian Liberal Party has found itself in this leadership situation.

Turnball was previously the leader of his party and head of the opposition when he beat the sitting leader Brendan Nelson 45 to 41. Nelson had won the leadership against Turnball after the defeat of the Liberal Government lead by four-term Prime Minister John Howard in 2007.

Nelson suffered the political death of poor poll ratings as leader of the opposition. In fact it was a record low at 9%, which then decreased further to 7% in March 2008. Rudd, on the other hand, has been soaring high in the opinion polls around the 70% mark.

Turnball managed to close the gap in the polls against Labor Prime Minister Kevin Rudd. However, in December of 2009, Turnball divided his party by supporting Rudd’s plan of an emission trading scheme (ETS). Abbott was a climate change sceptic and in December challenged Turnball for the leadership – the second such challenge within a month.

It was a three-way race with shadow Minister Joe Hockey expected to win with the support of John Howard and former Deputy leader Peter Costello. Hockey, in fact, only came third and was eliminated, with his second preference votes split between the two remaining candidates.

Abbott beat Turnball by one vote at 42 to 41.  Abbott would remain as leader of a fragile opposition. Bruised and battered, he faced the formidable Rudd, until the Rudd government suffered a similar fate. 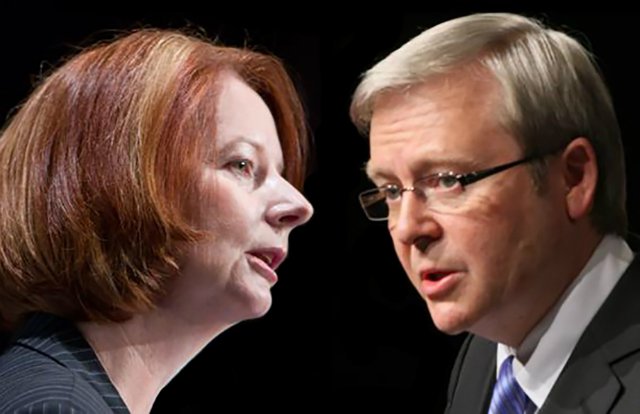 In 2010, Rudd had split opinions with his high-tax policy on natural resources hitting the mining sector of Australia. He also deferred his carbon reduction bill, which was defeated in the senate. With just over a year to go before the General Election the party became nervous, and in a midnight leadership ballot Rudd was out and his once-loyal deputy Julia Gillard was given the job of Prime Minister.

The people of Australia, as the media put it, ‘went to bed with one Prime Minister and awoke to another’. Here was a leader who had protected his country against the Global Financial Crisis, had signed the Kyoto agreement, had nationalised education and had made a famous apology to the Aborigine population for the acts of Australia’s past – ousted from office not by the people he served but by his own party.

Gillard called an early election and remained in power with a hung parliament, propped up by  three independent MPs. Prior to the election, Rudd returned to the back benches but was offered the post of Foreign Minister to try and bring unity to the party.

Gillard served with small mutterings over her leadership, and in February 2012 Rudd resigned as Foreign Minister whilst in America, citing a lack of support from the cabinet and Gillard. This latest crisis led to a leadership ballot, which Rudd lost 71 to 31. Admitting defeat, he returned to the back benches once more – vowing not to challenge the leadership again.

RELATED ARTICLE  The year that was 2018 - Part 6: Oceanian politics

A year later in March 2013, the knives were sharpened once again, following low opinion poll ratings and a fear Labor would lose power to the Liberals. Plots began circling with unhappy party members arguing that Rudd was the only viable option.

Gillard called a leadership ballot where she stood unopposed. True to his word, Rudd didn’t stand and Gillard lived to fight another day – but this didn’t last long. The election was nearing and Gillard had set a date to go to the country. The party became unsettled again and in June rumours started swirling around the corridors of power that Rudd would challenge Gillard for the leadership.

To try and deprive Rudd of support, Gillard called a leadership ballot at short notice and challenged Rudd, raising the stakes by saying if Rudd lost he should resign from Parliament so the party can move forward with a final answer. Support began to flock to Rudd with poll ratings in mind.

A key player in the toppling of Rudd, Bill Shorten, switched his support from Gillard back to Rudd. Gillard lost the vote 57 to 45, and with that she lost the Prime Ministership and resigned from Parliament.

Rudd then set a September election. Emerging from the ruins of the party, Rudd started to make gains in the polls, narrowing the gap between Labor and the Liberals. On 18 September 2013, Labor was delivered the final blow with a defeat. The liberals won 90 seats to Labor’s 55 – a 3.6% swing to Abbott. Rudd could be credited with softening the defeat, as not one cabinet minister lost their seat, however the drama of the Rudd-Gillard battle had turned the electorate towards the steadiness of Abbott and the Liberals. Worn out Rudd resigned from Parliament.

‘What has this got to do with us?’ I hear you say. Well firstly: the key thing that might interest Vada readers is that now Australia has a Prime Minister and Leader of the Opposition united in the fight for marriage equality. Though Abbot’s sister is openly gay, Abbott refused to allow a vote on marriage equality, something Rudd had pledged in the election.

Secondly, and more importantly, Australia serves as a stark warning to everyone – and I’m thinking in particular of the potential divide facing the UK Labour party over its new leader, Jeremy Corbyn. We should learn from our Australian cousins in the Labor party and the Liberal Party. Little good comes from party division. I have said previously that though I did not want the result we got at the Labour Party’s leadership election, I accept it and for the sake of party unity I will keep an open mind.

Getting back to Australia: governments should not be decided amongst the parties themselves but by the public. Turnball has said he won’t call an early election, unlike Gillard, who sought a mandate from the people to remain in office. I wouldn’t blame him.

The Australian public, though they supported Rudd more than Gillard, were fed up of the infighting and turned away. I’m not surprised that Turnball wants to let the dust settle before going to the electorate. I am, however, sad that the democratic process has been sidelined for five years in Australia.

There have been four Prime Ministers in five years and only two elections. I don’t predict the Liberals will do well at the next election. Labor have pulled together behind their current leader Bill Shorten. Shorten will have been dealing with his image as the one who wielded the axe in the Rudd-Gillard fight, but now Turnball is just as covered in blood as he is. The next election will be a fight between the two assassins and this is something I don’t ever want to see in Britain or any other democracy again.