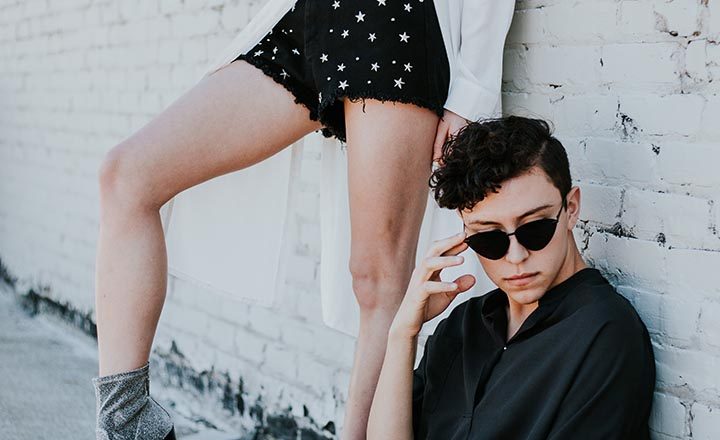 Nick Gomez
From a young age I've constantly been reading, writing, drawing and generally creating stories, worlds and characters for fun. This led to a degree in English Literature and Language at University. A passion for writing, especially about my own experiences, and ideas that pop into my head help me to understand myself and the world around me.
Twittering @nickawgomez

“Assumption makes an ass of you and me”. Truth comes from facts, not what you assume to be the truth. As a seemingly smaller and more misunderstood part of the LGBTQ spectrum, Bisexuality is often constructed out of a lot of assumption. Some of it can be harmful, and some useful, but all get in the way of true acceptance.

Blurring the lines of expectation goes hand in hand with bisexuality as few people, at least of those I’ve come across, identify as distinctly bisexual. When someone assumes I’m straight to then see me with a man, it’s surprising. I won’t lie and say that it doesn’t give me a little bit of pleasure of surprise people. Mainly because it reinforces that you can never tell who someone is from appearance and assumptions. Sure it might give you an idea, but given the chance most people will surprise you, for better or worse.

Many of my good friends know how I’d label my sexuality, because they asked, and because it’s not a secret. Despite this, I know that some still see me as gay. One very good friend, when tipsy, likes to proclaim to me that I’m “a gay man who likes boobs”. Stereotypes aside, I don’t think there are any gay men who are afraid of boobs the way some fear the vagina. I can just imagine the occasional gay man cringing at even reading the word! I understand where she is coming from, she’s only known me when I’ve been with men so she doesn’t have the frame of reference to see me with a woman. I accept that I won’t change her assumption, but it doesn’t make me any less bi.

On the flip side, I once found myself in a situation where I had befriended a colleague’s girlfriend. She didn’t know many people in this new town and we got along well when she came to visit him at work. Having been friends with many, many women in my life, because they don’t tend to judge the man loving teenage boy so much as the other boys did, I took it for granted that me seeing her one on one and as friends, with him knowing my sexuality, wouldn’t be a problem. I was wrong to assume. Somehow I’d forgotten, because of how I’d been treated in the past, that some people really would see me as interested in women. I wasn’t trying to sleep with his girlfriend but he did see a potential threat. Thinking about it from his perspective, if I was straight then it might seem unusual, even for secure young couples.

Assumption can go both ways. In my wayward youth I have used this to my advantage, playing up my camp side to start conversations with girls, sometimes unintentionally, but really to get beyond the feeling that I’m hitting on them.

It’s a double edged sword being bi, as the lines are blurred and figuring out the right thing to do is difficult. Hopefully one day there will be a simple answer, and more accepted, unnoteworthy role within our community, but I don’t think it’s likely.

As a side note, assuming someone was straight because they were hitting on a girl has meant I’ve missed out on a guy flirting with me. Never assume, only hope.

From a young age I've constantly been reading, writing, drawing and generally creating stories, worlds and characters for fun. This led to a degree in English Literature and Language at University. A passion for writing, especially about my own experiences, and ideas that pop into my head help me to understand myself and the world around me. Twittering @nickawgomez

View all posts by Nick Gomez →