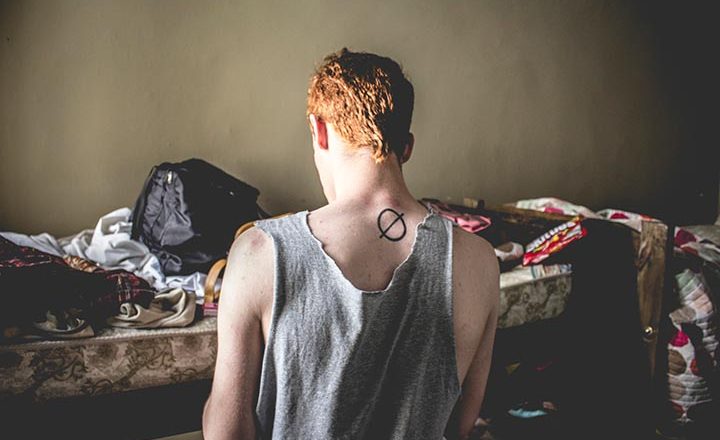 Thomas Stewart
Thomas Stewart is an English graduate and currently on the MA in Writing program at the University of Warwick. He is Culture Journalist and Contributing Writer for other publications. He enjoys suburban literature, folk music, curry, chick-flicks, Mojitos, books, watches and poetry.

You’ve recently become single. You’re no longer in the comfort – or confines you may say – of a relationship. Now, you’re free – a free agent – alone. And the idea of having sex with someone else terrifies you because you’ve spent the past two years having sex with the same guy who knew how to please you, knew that you liked your neck being sucked on, knew that you loved his hands rushing through your hair as he kissed you. Now, you have to find someone new. And you do. You’re sad and lonely and drunk and you find a guy in a bar, take him home and remove your clothes. You awkwardly kiss and in the moment it’s good, it’s fresh and new but when you wake up in the morning, with the pained hangover – the headache, the dry mouth – you see him lying next to you and your skin crawls. Not because he’s ugly, he’s probably very charming, but because he’s not the guy you loved. So you whisk him away and he leaves, gracefully.

Two weeks pass and nothing has happened, just time alone with your right hand and a session on the Internet but then you meet someone else and, in a way, you wish it could be something but it’s not, it’s just another one night stand. Another drunken fumble. You never fuck, you may be becoming a slut but you will never fuck, fucking is something personal, emotional, something you’ve only ever done with him – and that took long enough to get used to.

Three months go by and you’ve woken up next to a lot of naked men. Some attractive, some not, some you feel you would like, others you won’t. And as you close the door, you know you won’t see them again, or if you do it will be when you’re drunk and it will be awkward. So you decide to go on a date, you meet a guy in a bar, you don’t take him home, you go on a date with him. You go to the cinema and for food and it’s nice, you talk about what course you’re doing at university, where you grew up, who you live with, normal things. And you feel that you may like – or should like him – but you let it fizzle out because you’re not feeling it. You don’t reply to the texts very quickly, you go offline when he’s on Facebook. Eventually he gets the message. You feel bad but it was the right thing to do.

And now you go back to screwing people again. Slip back into your old ways. You don’t really like yourself anymore, you’ve become one of those people you always judged and scoffed at. Picking men up, taking them home and sending them through the door in the morning and if they have that glimmer in their eye, have that look that they may want to see you again or talk, you shut it down, you might let them in once more, for a fuck – you fuck now, you’ve stopped thinking of fucking as anything personal or romantic, you fuck them all because he was the only you fucked and if you fuck them then he’s no longer a memory.

One night you sit at your desk and you think about the amount it has been. You remember them all – well, their names. The stuff you did, maybe not, it all sort of blurs. You’ve scrawled their names down in your journal as if it’s some sort of collection or brutal reminder. You’re embarrassed. Disgusted. Some of them know each other, they’re probably all talking about you as they drink. “I have never fucked blank” and they all drink because they have. They’re probably comparing notes right now. That or they’re disgusted that they’ve been near you, that you’ve fucked your way around a friendship circle.

Then, one day, you meet someone you immediately hate. You don’t know why you hate him, you just hate everyone these days. But you’re forced to work with this guy and you do, you’re civil, knowing nothing about him, not really wanting to know anything about him until one day you decide to stop being petty and talk. And you do talk. You talk for an hour and your shift flies. And you go home feeling that maybe he’s not so bad.

Weeks later, you’re drunk and you text him. You don’t know why, you just do and he tells you to meet him so you do and you head back to his house, nervous and drunk and excited and not really sure what’s going to happen. But he kisses you, and it’s the best kiss you’ve had in a long time. He pushes you up against a wall, under a bridge, and kisses you. You feel his hands on your back, your fingers in his hair, and you kiss him. “Come on,” he whispers, chuckling, and you go to his house. Then you take off each other’s clothes. It’s not awkward or sad or bleak, you kiss and touch each other like animals – fierce one minute, soft the next. You have sex. You have sex in the shower, on the bed, against the wall. You kiss. You kiss his lips, his neck, his arms. You feel his body pull against yours and you feel like you’ve never had this passion before, you feel strong and sexy and you think he’s sexy and wonderful. Then you lay next to each other, after hours of having sex, and you talk. You don’t talk about your course or your house, you talk about what you love – you quote films, laugh at impressions, joke about how much you hated him before you knew him. And then, out of nowhere, he holds your hand and kisses it and you think “oh fuck”. Oh fuck, fuck, fuck. You know you like him. In that moment you’re telling yourself “fuck fuck fuck” because now you’ve fallen for him. Right there, that suddenly, you like him.

RELATED ARTICLE  Are sex dates ruining our ability to date at all?

You go home the next morning and all that fucking, all those guys, are meaningless. You stand in the shower and almost want to hit yourself. You want to see him again, you want to pick up the phone and ask him how his morning is going. Now you really want to hit yourself. You weren’t supposed to like him, you’re heartbroken and sad, remember? You weren’t supposed to like anyone.

But then it does happen again. It happens again the next day and find yourself falling for him even more because he reveals bits about himself. You’ve known him for a month and a half; you’ve had sex twice, laid in bed together, twice, and now he’s talking about himself. He’s explaining where the scars on his arm came from, how his mind has never fully been ‘OK’, the other guys he’s been with and you tell your stories too, you actually tell him, the only person to know what you’ve been doing the past couple of months. You don’t know why but you feel like you can tell him, like he won’t judge you. He doesn’t. He listens and talks back and you think “shit, am I really falling for him?” Don’t be ridiculous. You barely know the guy. You tell yourself it’s just sex, a casual thing but you can’t stop thinking about him, not just how mind-blowing the sex is but also how mind-blowing he is.

Then, for some obscure reason, you ask him on a date. Let’s do it properly, you think, whatever ‘properly’ means. And you do, you go on a few dates and you tell him you like him when you drunkenly crawl into his bed after a night-out, you tell him you haven’t met anyone like him in a very long time. You’re not in love, you tell yourself that, because you’re not, you just really like him.

But then something changes. He doesn’t reply to your message. When you’re drunk and horny and want to see him you don’t get a response, not until the next day and he tells you he was asleep and then you make a euphemism but it is easily rebuffed. And then, ever so suddenly, the whole thing is over. You don’t go round when you’re drunk anymore. You don’t have wild, passionate sex. You don’t talk about the things you love. It’s over. Fizzled out. And for some unknown reason you feel all alone again. You didn’t mean to feel un-alone, it just happened but now you’re alone again, sitting at your desk, not weeping, but letting out a sigh. Fuck fuck fuck fuck it. And you’re angry at yourself for being so foolish, so terribly, terribly foolish.

You go out for your Christmas party and he’s there but you’re fine, a month has passed, you were never together, it’s fine, you’re fine. And you see him talking to a guy at the bar, sipping his vodka, laughing at his jokes so you do the same in some childish act of jealousy, knowing full well that he won’t even bat an eyelid. You talk to a semi-interesting guy at the bar, you pretend to find him funny, try and care about his Mathematics degree. He’s attractive, he has nice black hair, so you get drunker and you take him home and the sex is good. Not great. Good. And in the morning you wake up with that bad headache and dry mouth. The guy isn’t there, the guy with the nice black hair. But suddenly he comes through your bedroom door dressed in his underpants with two glasses of tea in his hands. He smiles, bids you good morning and gets back into bed. You sit there, with ruffled hair, naked, and you realise something. He thinks this is romantic. He thinks this means something.

So you tell him you have to go to work. He says it’s OK and gets his clothes back on, heading to the door where he lingers and gives you a kiss on your hungover lips. He pulls away, smiling and you see it, that glimmer in his eye. He likes you, he actually really likes you. You stand in your pyjamas with your bad hair and even worse breath and he likes you, he doesn’t care. “I’ll text you,” he says and you nod, giving him a comforting smile. “Bye,” he says. “Bye,” you say and shut the door, knowing you won’t see him again. And if you do, it will be drunk and awkward and you will be picking up a new guy because the pain, that pain, just doesn’t seem to be going away.

Thomas Stewart is an English graduate and currently on the MA in Writing program at the University of Warwick. He is Culture Journalist and Contributing Writer for other publications. He enjoys suburban literature, folk music, curry, chick-flicks, Mojitos, books, watches and poetry.

View all posts by Thomas Stewart →