So I am writing this having just donated blood, and not for the first time. This is the fourth time I’ve donated and despite hating needles, it gets easier every time.

I posted a status on social media after my latest donation and was met with cries of ‘Gays can’t give blood!’ from a few – including, to my surprise, one gay friend. To an extent, of course, this is true. However, and this is where I reveal something personal, a gay man is able to donate blood in the UK if he has not had any sex with another man for over a year.

There we go, I said it. It’s a tragedy. I’ve been single and celibate for over a year. Don’t send me any cards or flowers or anything. What I want to discuss is why this partial ban even exists.

A report released in June highlighted that 25% of us will need blood from a donor at some point in our lives. Yet the same report stated that, over 10 years, the number of new blood donors has dropped by 40% to just 4% of the British population. That means there are only around 2.6 million people regularly donating blood, but 15 million people who will need a blood transfusion at some point.

There is a shortage, in particular, of donations from blood groups like O-negative, B-negative and AB-negative. The NHS needs an extra 204,000 new blood donors by the end of 2015 to meet demand, yet British law severely restricts donations from men who have sex/have had sex with men (MSM).

Britain has a system of ‘deferral’, where men who haven’t had sex with other men in the past 12 months can donate (with some exceptions). The UK advisory committee on the Safety of Blood, Tissues and Organs (SABTO) concluded, when lifting of the ban was discussed back in 2011, that if donations were allowed from MSM who have abstained from sex for five years, the risk of HIV getting into the blood supply would increase to just under 5%.

Yet ‘high risk’ heterosexuals face less scrutiny than a low risk man who has been in a monogamous relationship with another man and used protection throughout. The previous indefinite ban (which Northern Ireland still has in place) came from a time when HIV tests were not around. It was also a time when HIV was seen as a ‘gay man’s disease’.

Things have changed now, screening and treatment are both better, and we know a lot more about HIV and how it spreads. But there’s still a deferral period on blood donations from MSM, which rules out most of us from donating.

What’s more, you sign to consent to your blood being tested for HIV, hepatitis and other blood-related diseases. If your sample tests positive you will be called and invited for a discussion. This wasn’t a form for gay and bisexual male donors. It’s the same form that any heterosexual would fill in. Everyone is screened equally.

So with these checks in place, why is it that there is still a 12-month ban on blood donations by men who have sex with men? Some will argue that there is a delay in HIV showing in any tests so it’s best to wait. However, I have already consented to my blood being tested, as would my straight counterpart.

The window period for HIV is up to three months, the same amount of time required between donations by law, but most blood tests are far more accurate and can detect HIV much sooner than this. It doesn’t make sense to have a 12-month deferral period.

When testing my blood for iron levels, the nurse didn’t wince at the strangely acidic nature of my gay blood. Nor were the nurses bemused by the rainbow colour of my donation. The truth is they didn’t know I was gay.

Now please don’t take my views as a call to lie. That is not what I’m saying at all. What I’m asking is this: How can you tell if my blood is gay? You can’t. The nurses couldn’t either. My blood is as good as the next man’s.

This ban is legislative homophobia, legislative gay-bashing based upon fear of the ‘gay disease’ from the 80s. Legislatively, we haven’t quite got over it. Medically we have, and science has become less ignorant as knowledge has increased.

RELATED ARTICLE  Why can't we talk openly about condom use?

If we look to the wider world, there are several nations where there is no deferral on MSM donations whatsoever. These countries include Bhutan, Bulgaria, Chile, Italy, Latvia, Mexico, Poland, Portugal, Russia (that’s right!), South Africa, South Korea, Spain and Uruguay. These nations don’t appear in the news with an infected blood crisis, either. 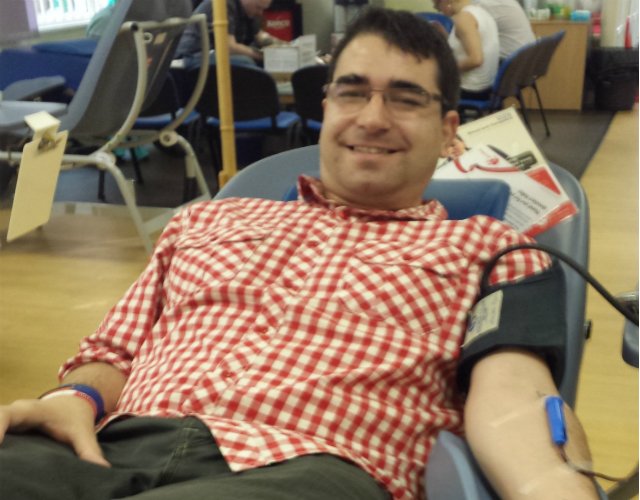 If you are in a similar situation to me, why not turn your singledom into a good deed? Donate blood. It takes about an hour of your time from sign-in to leaving after your drink and biscuit. I went after work one evening, it was that easy.

To the government, I say: review the deferral. The country needs donations and I, for one, will be sad when I meet someone and can no longer donate. I want to encourage my friends – gay, bi or straight – to donate, yet I have to take into account whether they are gay and whether they have been celibate for a year.

More importantly, I want an end to legislative gay-bashing. An end to the law that says that my gift of life is worth less than a heterosexual’s. I want to know that if my best friend were in an accident and I matched his blood type, that I could give them what they needed without prejudice (but within normal controls). End what’s left from the stigma of the 80s and open the blood banks.

For those that are eligible and wish to donate, please visit blood.co.uk.

For those who wish to see a change to the existing legislation, you can sign the petition.