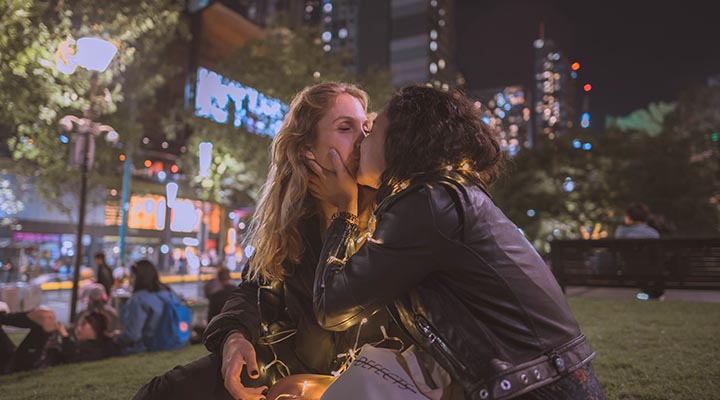 Philip Ellis
Freelance writer, ineligible bachelor and shameless flirt. Loves: books, booze and boys (in that order). No, I don’t intend to grow up any time soon, and yes, that song is about me.

Has pop culture moved on in its depiction of queerness, or are we just kidding ourselves?

I try to steer clear of politics. Not because I have particularly controversial or polarising opinions; more because I struggle to understand half of what is going on, and everybody knows that frowning gives you lines. So while I understand that the recent steps made towards equal marriage are crucial on a civic level, I’m far more interested in how gay people are represented in that other important arena, the entertainment industry. After all, I very much doubt there is a better gauge for public perception of the LGBT experience.

I am just about old enough to remember the shock caused by Anna Friel’s pre-watershed lesbian kiss in Brookside back in 1994. Years later, when adolescence hit and I realised I had a big thing for other boys, I couldn’t help but notice how few people like me there were to be found on television or in films. In the early 2000’s that seemed to change, with the trendy soap As If and dark comedy Six Feet Under naturalistically incorporating gay characters into their main casts. Despite this, homosexuality in mainstream drama was still considered taboo.

So what’s changed in the last decade or so?

On Valentine’s Day this year, the evening movie showing on Film 4 was the gay comedy-drama I Love You Phillip Morris. This was not a rom-com where the gay characters are bitchy, well-dressed sidekicks; this was a stranger-than-fiction real life crime story about a con-man who is intelligent, cunning and ruthless, and also happens to be in love with another man.

Unfortunately, gems like Phillip Morris (and fantastic channels like Film4) are few and far between. While it is becoming more acceptable (de rigeur, even) to include gay and lesbian characters in films and TV shows, too often their characterisation feels poorly fleshed in contrast to the other stars. And how about a storyline that doesn’t centre on that character’s sexual orientation?

Recent films Skyfall and ParaNorman both make brief references to homosexuality that subvert the fanfare of shows like Glee with their matter-of-factness. In my mind, the very notion that these short scenes have become a topic of conversation independent of the films themselves only goes to show how desperately LGBT cinema-goers are still clutching at straws to find any recognisable version of themselves in pop culture.

Take Frank Ocean, for example. While I personally think his debut album Channel ORANGE is absolutely fantastic, it could be said that the press coverage of his decision to come out as bisexual has eclipsed the amount of musical criticism. To have an African-American hip hop artist identify as anything other than strictly heterosexual was still considered brave even in 2012, especially considering the risk he ran of alienating fans by posting his announcement in an open letter on Tumblr prior to the album launch.

And speaking of African-American hip hop artists, Azealia Banks caused quite a stir back in early January when she called flamboyant celebrity blogger Perez Hilton a “faggot”. Banks, who herself identifies as bisexual, tried to backtrack with a convoluted explanation of how she defines the word “faggot” as something completely different to how the rest of the world does; “a faggot is not a homosexual male, a faggot is any male who acts like a female. There’s a BIG difference.”

Unfortunately, the rapper is far more interested in maintaining digital vendettas than she is in discussing semantics; just when we thought she might have learned her lesson, Banks renewed her spat with Hilton this month, calling him a “faggot” once again. A word to the wise, Azealia, until your new definition goes mainstream, you might want to think twice about using the gay equivalent of the “N” word.

Over in the US, considerable progress has been made in the name of visibility and acceptance, with countless celebrities putting their name to It Gets Better videos, and more and more public figures coming out. Actor and heartthrob Matt Bomer lives openly with his partner and children, and current affairs expert and silver fox Anderson Cooper confirmed all the rumours last year. More recently, Jodie Foster’s retirement/coming out speech at the Golden Globes last month was divisive to say the least, with some applauding the actress as incredibly brave and others criticising her for only speaking out at the end of her career in the public eye. Either way, Foster is known first and foremost for her film work, with gossip about her private life coming in a distant second.

I was sat watching TV the other night, wondering whether gay teens have it better television-wise than I did, and ended up getting a little bit depressed. Yes, there is the unstoppable machine that is Glee, which features characters of just about every race and sexual orientation possible, but it reeks of tokenism more than genuine acceptance, with the new transgender character Unique shoehorned into proceedings simply because Alex Newell earned a guest-spot via The Glee Project. The writers don’t seem to know or even care if Unique is a drag persona, or whether the character actually identifies as transgender – although admittedly, asking for nuance from a show created by Ryan Murphy might be something of a tall order.

Oh, Ryan Murphy. I can certainly admire what he is trying to do with his creative output. American Horror Story is a pulpy, highly enjoyable anthology which actually does some justice to gay characters; the latest ‘Asylum’ arc starred Sarah Paulson as a lesbian reporter whose sexuality was frequently overshadowed by alien abductions, demonic possession and grisly murders.

But I am having a harder time getting on board with Murphy’s latest project, The New Normal, a sitcom about a gay couple and the woman who agrees to be a surrogate mother so that they can start a family. Everything about it screams “soapbox”, from the title itself to the many moments where the swishy Andrew Rannells (who I adored as the self-serving Elijah in HBO’s Girls) clashes with Republican homophobe Ellen Barkin (who similarly does her level best with the awkward speeches Murphy places in her mouth).

Yes, the show has worthy intentions, and I suppose I have to respect that, but in execution, The New Normal is no more progressive (and more importantly, no more entertaining) than Will & Grace was years ago. By making gay issues a primary source of dramatic conflict, the show defeats its very purpose. Gay kids don’t want to watch shows that tell them being queer is the new normal, when it’s really just normal, full stop.

Freelance writer, ineligible bachelor and shameless flirt. Loves: books, booze and boys (in that order). No, I don’t intend to grow up any time soon, and yes, that song is about me.

View all posts by Philip Ellis →