No introduction necessary. This week is Lady Gaga’s. Background History: Truth be told, Stefani Germanotta has done a lot of weird and wonderful stuff in her past, almost too much to mention. She started writing music at 13, played open mic nights at 14 and, after high school, was offered early admission to a musical theatre conservation which she later dropped out of to pursue music. Stefani moved to Manhattan and after endless attempts to “make it”, she was scouted by producer Rob Fusari (who supposedly created her moniker) and the professional recordings of her sketchy electropop eventually got her signed to Def Jam Recordings in 2006. A mere three months later she was dropped by LA Reid, having been dubbed “too unusual and provocative”. She went on a hardcore bender, returning home to become a go-go dancer and experiment with drugs. She met Lady Starlight who helped her “become Gaga” and the two found fame and success in their strange karaoke come burlesque come rock show. Vincent Herbert, of Interscope Records, offered Stef a music publishing deal with Sony where she began writing songs for Britney, Fergie and The Pussycat Dolls and in late 2007, she was introduced to RedOne before joining Cherrytree Records. We all know what happened after.

In 2008, Gaga moved to LA where she began work on The Fame. Her creative team, Haus of Gaga, helped to hone her image and sound before the album was eventually released in August 2008. It was met with positive reviews, many critics commenting on Gaga’s ability to forge great pop music, her excellent voice and the content of the album, different to many pop records out there: it was almost “anti-pop”. The record topped charts across the world and, whilst the singles were slow off the ground, the album became an undeniable highlight of 2008. The Fame, rather fantastically, has now sold over 12 million copies worldwide, arguably down to “Paparazzi“. Not bad for a debut. Whilst racking up awards, Gaga opened for the Pussycat Dolls during their Europe and Oceania tours and was penning tracks for her 2009 EP, The Fame Monster. All the while, the world was telling her she was merely a Madonna for the 21st century: unoriginal, purposely controversial and controlled.

I have no issues arguing with people who say The Fame Monster isn’t one of the greatest releases in the past ten years. The eight songs are pop perfection, each dealing with a different aspect of negativity that comes attached to the fame that Gaga had so openly experienced. This EP crept us behind the scenes of Ms Germanotta, a rare insight into her fears and insecurities after the bold and crass The Fame. Critics admired her honesty and passion but said the EP didn’t really show much progress from Gaga as an artist. Bad Romance, however, will always be great. Weeks after the release, and mere months after finishing the Fame Ball Tour, Stefani toured for a year and a half, roping in nearly $230 million, the highest grossing tour for a debut headlining artist. As if she didn’t have enough money, she partnered up with Beats and Polaroid in 2010 to create new headphones and cameras respectively.

In 2011, Gaga released Born This Way, an album full of gay liberation, sexuality,  feminism, religious controversies and independence, inspired by dead fashion designers and metal music, complimented by “sledgehammer beats”. It was a strange departure from her previous work but one which seemed to bode well with fans and critics: the album charted well worldwide and sold 1 million copies in its first week (!), the title track becoming the fastest selling single in iTunes history. She received three Grammy nominations and the album was re-released as a remix album and a complete collection. The stories behind her music became even more complex and contrived, with videos of Gaga herself birthing a new race of uber-humans. People were worried she was becoming a bit of a gimmick, a phase for the commercially hungry 2011 pop music consumers.

After that, she wore a meat dress, cancelled some shows because of threats of violence, she sung a jazz song with Tony Bennett and tore a bit of her hip whilst having a dance on tour. She cancelled the remainder of The Ball in order to heal and started work on her third album. 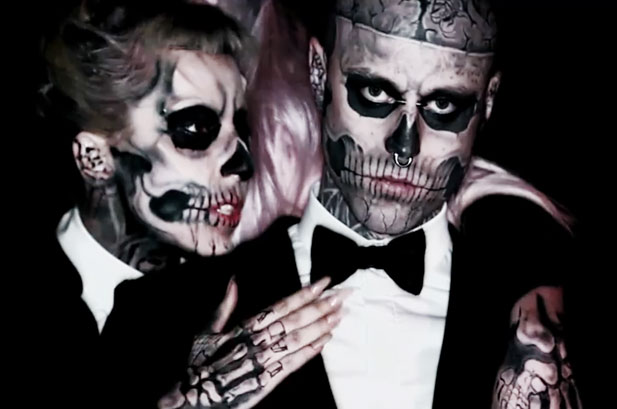 In late 2012, Gaga revealed her new songs were beginning to flourish. Fans were promised another musical departure from her previous work, an irresponsible approach to music in comparison to the hard and heavy content of Born This Way.  She was letting go of being serious and content with having a good time doing what she loves – hats off to the girl. It’s hard to change a winning formula but she’s had the gusto to do exactly that this time around. Revealing her new tattoo which spelled “ARTPOP”, we already knew this album was lightyears away from her previous work and when snippets of “Applause” leaked on the internet, it was proof that this was definitely a new chapter for our Gaga. Let’s not mess around with silly details anymore; down to business.

ARTPOP actually isn’t worlds away from her past endeavours, moreso a genuinely shameless approach to music. If this album were a person, it’d be one of those jesters who spends hours to make themselves look like they’ve just rolled out of bed. Thoughtfully portraying themselves as thoughtless. But it works. It’s a fun album, with a heavy focus on smutty sex, music, fashion and drugs. The diversity is impressive and interesting without being unrelenting or offensive. There’s enough personality in each song to ensure they sound individual whilst acting cohesively as part of the bigger picture. Heaps of songs hark back to previous Gaga eras, such as clever takes on old lyrics or perhaps an evolved melody or theme. ARTPOP doesn’t really have a moral to portray unlike much of Gaga’s older music but with the increase in EDM’s hollow influence on popular music, maybe that’s intentional?

Whilst co-producing each track herself, Gaga made a conscious effort to include a range of producers in ARTPOP, something which has only done her favours. Internet’s favourite youngsters Madeon and Zedd are two new contributors – although the latter offered up a remix for her Born This Way re-release, something which bridges the gap between the two albums – whilst will.i.am is credited on the twinkly funk-driven “Fashion!“. It’s a very electric, inorganic album, rammed full of satisfying synth chord progressions and garish drum machines. The hooks throughout are fantastic and the intense build ups to the “drops” are some of the most satisfying outside of the literal EDM world. A few songs, however, feel under produced, almost half-finished, but perhaps this is Gaga proving a point – ARTPOP isn’t all fast and furious, some downtime is okay too.

Lyrically, this album is caught somewhere between The Fame‘s lust and Born This Way‘s “maturity”. There’s an undeniable focus on sex and love throughout many of the songs, especially an early chunk of the album (“Venus”, “G.U.Y”, “Sexxx Dreams”, “MANiCURE”, “Do What You Want”), whilst the rest of ARTPOP flits from psychedelic tales of narcotics to snippets of Gaga’s own influences, inspirations and motivation. There comes a special moment in the album’s down-tempo, robotic title track where Gaga trembles: “Our heartbreak can withstand these things. My heart can beat with bricks and strings. My artpop could mean anything”.  Stefani has important claims to make with this album but she’s not taking herself too seriously this time around: like her or loathe her, ARTPOP embodies her clever, thoughtful and sentimental craft.

Here at Vada HQ, there’s been a heated debate surrounding Lady Gaga’s position in music and society circa 2013, including her desperate attempt at competing with other female deities such as Britney and Katy Perry. Many idolise her as being a voice for the unheard, the “outcasts” of society – she herself is a “kooky” weirdo, riddled with sexual confusion and what we can now conclude is a particularly manic and addictive personality. Others detest her and the way she strives to be controversial: they are content to live their lives without the constant barrage of “respectful” inaccurate portrayals of gay people. Luckily for everyone, Gaga has toned this aspect of herself down for ARTPOP. There’s only one cripplingly cringey song on this album, “Donatella“, which serves as a “tongue-in-cheek” self righteous filler track, overproduced and plagued with terrible lyrics: “just ask your gay friends their advice before you get a spray tan on holiday in Taipei”. It sounds like a bad Britney song.

ARTPOP is not without its flaws: there are filler tracks few and far between, and a few try hard songs (“Swine” being particularly hard to stomach at the best of times) as well as the plain offensive. The main crux of the album, however, is very impressive. Taken with the pre-warned pinch of less serious salt, ARTPOP is a great addition to Gaga’s catalogue. Highlights include the introductory barrage of Aura’s “DANCE, SEX, ARTPOP”, a perfect beginning to this self-aware comparably light-hearted album as well as “Sexxx Dreams”‘s “when I lay in bed, I touch myself and I think of you” before the criminally suave chorus thrusts itself upon you. On my third, fourth and fifth listen, I discovered more about this album than I had intended and I really think this is Gaga’s grower rather than her previous show-ers.

The fact Gaga survived the Apopcalypse is only a good thing in my eyes. She’s going to release a jazz album next year, tour with ARTPOP and perform some songs in bloody space, guys. There’s also the vague promise of ARTPOP: Vol 2 which may offer up new songs for those underwhelmed and disappointed fans. Maybe it’s my naivety but I feel like Lady Gaga has a big say in what she does and these ideas are her own: it’s refreshing to see such a creative and inspired artist persevere regardless of the astronomical amount of hate targeted at them.

ARTPOP is a summary of pop music and society in 2013: the good, the bad and the ugly. There’s also something really invigorating in hearing R Kelly scream “fuck” at the top of his lungs. Well done everyone.

One thought on “We’re Glad Lady Gaga Survived The Apopcalypse”