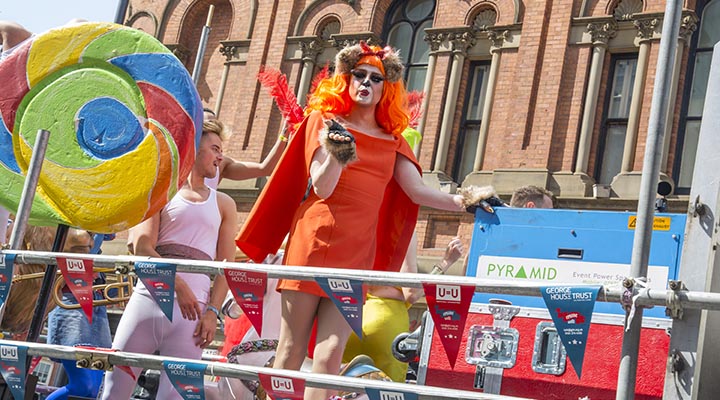 Tim Boden
Tim Boden has been a grumpy old man since he was about 13. Born and raised in the darkest East Midlands, he now lives in Australia as part of an ongoing project to avoid getting a proper job and settling down for as long as reasonably possible. His interests include comics, beer, rugby league, 20th-century history and other things mostly favoured by middle-aged men who spend a lot of time in sheds. He has very strong opinions on vegetables.

August means many things to many people. The kids are off school and Parliament is out of session. The sun is in the sky (albeit usually skulking behind a layer of storm clouds) and the wasps are all over that glass of lemonade you put down a minute ago. Here in the UK, at least, August also means it’s Pride season.

I’m willing to bet that a good proportion of you instinctively sighed or rolled your eyes upon reading that. Pride attracts as much weary cynicism as it does excitement, and for good reason. You don’t have to be a resentful crybaby of the “Where’s my Straight Pride parade?” variety to have grounds for criticizing the whole Pride phenomenon. Some people take issue with the advertising and commercialism, others feel that it reinforces stereotypes rather than refuting them, whilst others may question why in this day and age we still need Pride parades at all. Haven’t we got equal rights now? Is there any reason to walk through the streets announcing our sexuality and gender identity to a society that’s no longer remotely bothered either way? Is there, really, any need to be proud?

Let’s take a step back for a moment. Pride has its origins in protest, and specifically in the Stonewall riots of 1969, when the gay community of New York protested against unprovoked police raids on a gay bar called the Stonewall Inn. The first Pride parades were held the following year by way of commemoration. In that era, to announce that you were not only unashamed of being gay but downright proud to openly be yourself in the face of social pressure to stay closeted was a statement of defiant resistance.

In many societies, it still is. By some counts, there are as many as 76 countries in the world where being gay is illegal (although not all countries that outlaw homosexuality necessarily enforce the law), and even in places where the law and healthcare system allow people to transition to a gender other than the one they were assigned at birth, trans* people are frequently subjected to prejudice and violence. Pride marches may be uncontroversial over here, but Poland’s only gay MP was beaten up and spat on at this year’s Warsaw Pride, and as part of Russia’s new laws against ‘promoting homosexuality’, Pride marches have been outlawed in Moscow for the next hundred years.

It’s not as if prejudice is non-existent in the UK, either. Back in 2009, one of the first things Doncaster’s mayor, Peter Davies, did following his election was announce that he wished to cut funds to Doncaster Pride on the grounds that he objected to ‘councils spending money on them [ie. LGBT people] parading through town advertising their sexuality’. The recent Parliamentary debates on same-sex marriage brought all kinds of grim Conservative throwbacks crawling out from underneath their rocks, making bizarre statements about parents not wanting gay children and the legal complications of a hypothetical lesbian queen, as well as generally acting as if granting same-sex relationships the same recognition as different-sex ones was an unreasonable indulgence of a bunch of belligerent ingrates. Only last week, there were reports that many schools still had Section 28-like restrictions on ‘promoting homosexuality’ in the classroom. While those of us lucky enough to live in a liberal metropolitan area may feel like equality has been achieved, life as a member of a gender or sexual minority is a completely different experience in the hinterlands beyond.

RELATED ARTICLE  Make-up and Feminism Can Go Hand in Hand

This, I feel, is where Pride has its real impact. I grew up in rural Nottinghamshire, and while I wasn’t literally the only gay in the village, I didn’t meet anyone who was openly gay or trans until I went to uni. Having known what it’s like to feel like the only one, it’s amazing to go to a Pride event and see the streets packed to overflowing with LGBT people of all ages, classes and personalities, celebrating together. The sight of the crowd at Pride has an instant visual impact, and demolishes so many stereotypes – we’re not a vanishingly small minority, we’re not all the same, we’re not miserable – we’re here, we’re queer, and we’re happy that way.

That’s not to say there aren’t plenty of fair criticisms of Pride events. The protest angle often seems absent from modern Pride events, and the inevitable demands of making money mean that many Pride events are heavily commercialised, often acting as much as a marketing opportunity as a grassroots gathering. God only knows, a couple of weeks ago at Leeds Pride I found myself stood in a packed courtyard listening to music I hated and drinking bad lager out of a plastic cup while being regularly hit in the face by the hair of the woman dancing nearby, and found myself thinking, “Christ, I wish I was straight.” Then I remembered that lots of straight clubs are like this all the time and suddenly felt alright about being queer again.

But I digress. Even at its naffest, Pride by its very existence sends out a message that we’re here and we’re not going away. There obviously has to be more to activism than merely raising awareness, but from the sexually uncertain adolescent being picked on at school to the resentful bigot who wishes we’d all just go away, the visible presence of the fragmented and conflicted ‘gay community’ actually behaving as a community sends a powerful statement to onlookers. And if it’s still not your cup of tea, well, that’s fine  – nobody’s going to revoke your gay card for non-attendance.

Protesting and partying don’t have to be mutually exclusive, and in my personal experience modern-day Pride events combine elements of both. You don’t have to be proud, but you shouldn’t be ashamed. As long as there’s people in the world who’d tell you otherwise, Pride still has a purpose.

Tim Boden has been a grumpy old man since he was about 13. Born and raised in the darkest East Midlands, he now lives in Australia as part of an ongoing project to avoid getting a proper job and settling down for as long as reasonably possible. His interests include comics, beer, rugby league, 20th-century history and other things mostly favoured by middle-aged men who spend a lot of time in sheds. He has very strong opinions on vegetables.

View all posts by Tim Boden →