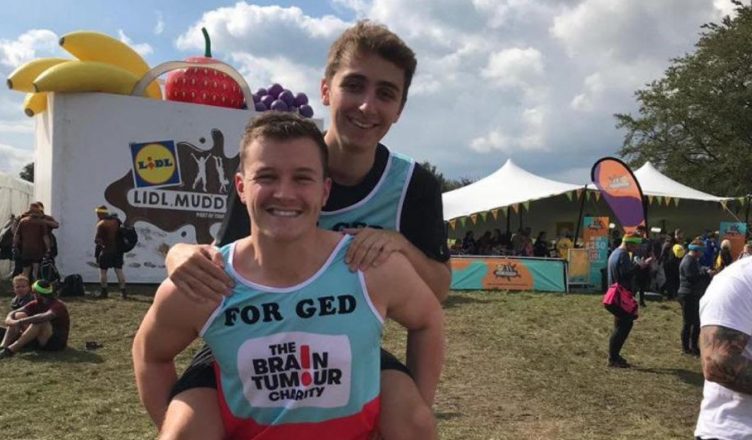 Being yourself at work is something that LGBTQ+ people continue to wrestle with. As part of our Out at Work series, Vada Magazine meets brothers Alexander and William Deakin. Despite varied career backgrounds, they now both work in the finance sector.

Alexander Deakin took a somewhat unconventional path towards his current role as Head of Marketing and Sales at one of the UK’s leading accountancy firms. Having studied Drama at university, Alexander began working in marketing at the Manchester Evening News, rising from account executive to manager, before being approached to join a local building firm. He believes in the importance of LGBTQ+ visibility in the workplace, and advises anyone thinking of coming out at work to find an ally.

His younger brother, William Deakin, also works in finance. Following his university studies in Finance, Accounting and Management,  William started out working for a company that didn’t reflect his values of equality and diversity. And having taken the decision to leave that challenging work environment, William now works as a Financial Planning Analyst, and says that his brother is a constant source of inspiration.

Where did you study?

Alexander Deakin: I went to the University of Exeter and completed a BA Hons in Drama. I chose this degree, because I knew the course was heavily performance based, but also emphasised the importance of theoretical learning and the application of this learning. Queer Theory, in particular, was something that really attracted me to the course, educating me on the binary systems we live within and how best to uproot those norms in the real world.

William Deakin: I studied Finance, Accounting and Management at Nottingham University. I chose the scheme as it was the only course I could find which had management included, and not just purely accounting and finance. This allowed me to take optional modules, such as a ‘Managing Equality, Diversity and Inclusion’, which I found incredibly interesting and inspired me to join the newly formed EDI committee at university, and become one of the undergraduate representatives.

AD: Following my university course, I completed the Google Squared Digital Marketing Qualification to hone my collaborative digital marketing skills, working with marketers from across the world.

Tell us about where you’ve worked in the past

AD: I started my marketing career working for the Manchester Evening News (now Reach PLC) as a Marketing Account Executive. I quickly moved from this position into a Marketing Account Manager role. I was then approached by a client, a local Manchester based building society, who was impressed with my approach to their marketing needs and was employed within their management soon after. In this role, I was able to flex my talent and learning and very quickly was made part of the leadership team.

WD: My first role out of university was a true teaching moment. I was desperate to start my career and start earning some money, so I applied for anything and everything, without taking into account their culture or philosophy. As part of the interview process, I was asked to present something I was passionate about, and ended up giving a talk on Equality, Diversity and Inclusion and how companies should see the business case for inclusion. I got the job, however, upon starting I quickly realised that they had hired the idea of me, not the reality. The CEO sent an offensive group-wide email with dozens of ‘pronouns’ to call groups of people. I opted to leave that company, and decided on my following job hunt that I would only apply to companies which had an established culture of inclusion.

AD: During my time at the society, I gained fantastic leadership from my CEO, Steve, who believed in me from the beginning. It is rare in this world to find someone who will put you before themselves in the corporate world, and for this, I owe him my gratitude and respect. I don’t think that many of my age group, particularly within the LGBTQ+ community, gain this level of support and encouragement, and without it, I wouldn’t be where I am today.

How did you land your current job?

AD: I had been highly recommended by some of the people I had worked with previously who put me forward. I went through the interview process and was offered the role! When I started, all the usual demons came back from the past to haunt me. But I always remind myself of what RuPaul says to contestants on their show: you need to “overcome your inner saboteur!”. With this in mind, coupled with a sense of determination that I’d gained from being bullied as a kid and having to always fight for what I wanted, I was able to get into the swing of things. I now continue to thrive, proudly!

WD: I had already handed in my notice, choosing to leave my previous toxic work environment before I had even found a new job. Luckily the interview at my current company went well and they offered me a job. My new organisation is completely different, with a very inclusive atmosphere. From the moment I started here I have felt comfortable and welcomed. The leadership team take the company’s culture exceptionally seriously, and are proud of the progress and quality of culture they have fostered.

Have you always been ‘out’ at work?

AD: Being gay is part of who I am, and I have never tried to hide it. Some people will, and have, questioned whether it is necessary to talk about my sexuality at work. For me, the answer is yes. I know the general consensus is “we don’t talk about our love life” at work, but to be honest, visibility is everything. If I can start a conversation, then that’s good enough for me.

WD: I ended up coming out over an informal lunch when I was asked if I was dating. I found it quite difficult at first to talk about it. I was worried for a number of reasons, the main irrational thought was that the Asian member of my small team may not agree with my sexuality as he grew up in India, where LGBTQ+ topics are much more taboo. Afterwards, however, it actually started a conversation around the subject of his home, and how gay people were perceived in India. He was entirely unbothered about my sexuality. It was quite beautiful and insightful, as both of us learnt more about our different cultures and how they may have influenced our lives in different ways.

AD: I am also in a great position where I don’t need to ‘come out’ as my persona is what the world has defined as being gay, so there is never a need for me to come out as such, and I feel lucky in this regard. Our community is made up of layers of individuals, not just one, and whilst socially this is being understood, I think there is still space for greater understanding around this in business.

What was the reaction?

AD: The reaction to me being gay has always been that of celebration. It’s not often you find someone as fabulous as me within the corporate world, so to most I think I’m a bit of spice to add some flavor to the mix. I have, and still am, very lucky to work with people who judge me based on my talent and delivery, not who I love. I’ve had a very positive experience so far and that is great for me, as it enables me to confidently put forward my thoughts and opinions to influence decision making at a senior level.

WD: I’ve had other mixed responses, but nothing negative so far. That said, due to hybrid working, it is difficult to know who knows and who doesn’t at this point. I think that due to my personality, I don’t find it easy to come out over and over again to different people. But I know that ultimately it’s best for me to be myself.

Do you have any advice for someone who is thinking of coming out and works in your industry?

WD: My advice to someone thinking of coming out is that the finance industry has a murky past and a bad reputation when it comes to diversity and inclusion. I would say that you should not expect everyone to understand the nuance and detail of inclusion, but on the other hand not to expect the worst in people, as I have often done. Although we are told as we are growing up that being different is a bad thing, I’ve actually found that being LGBTQ+ in accountancy has given me an edge; I think differently to those around me, and being out at work allows me to communicate those ideas and viewpoints rather than hiding them.

AD: My advice to anyone who wants to come out at work, is do it for yourself. Don’t do it because of other people’s thoughts and questioning. Also, find an ally; someone who not only accepts, but celebrates who you are.

WD: I’m very lucky and find that being out at work isn’t as hard when I have an older gay brother, Alex, to lean on. He is a constant source of inspiration, having become successful very quickly, whilst also being vocal about his sexuality. We are extremely close and talk every week about our careers and what we want to achieve. We give each other advice to overcome whatever barriers are in our way, and pep talks if it sometimes takes its toll. I know others are not so lucky.