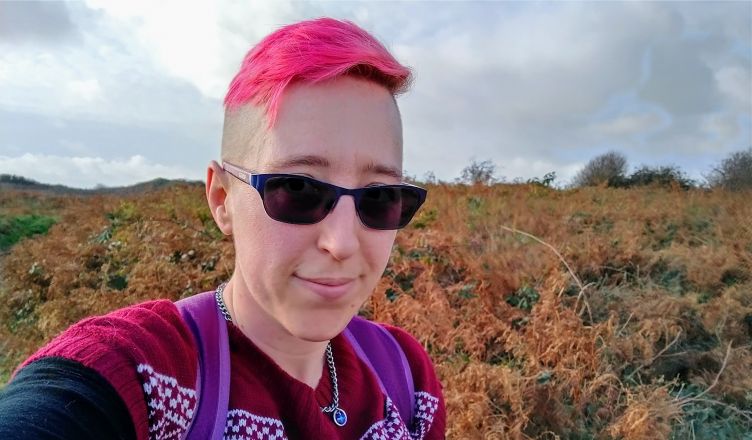 Being yourself at work is something that LGBTQ+ people continue to wrestle with. As part of our Out at Work series Vada Magazine meets Alexis Bushnell, a social media guide who offers ethical social media guidance for neurodivergent business owners.

Alexis Bushnell says she fell into her social media role by accident. “I have BPD, a serious mental illness, and am unable to work a traditional job because of how it impacts me,” she tells Vada Magazine. “I was a blogger from my late teens, mostly about mental health, and that led me to several blogging conferences which all included training on social media and marketing, as social media was becoming the big way to market at the time.”

Once her mental health was stable enough to think about a long-term career plan, Bushnell looked to social media, having used it as a marketing tool for her blog. She was also drawn to the idea of being able to work from home, whilst still taking care of her mental health.

Reflecting on her career, Bushnell says that she has learnt something from each previous role: “These experiences have taught me something about who my ideal clients are, what my strengths and specialisms are, and what really lights me up about my work.”

RELATED ARTICLE  17 signs you have a very cool mother

In 2021, Bushnell took the decision to help others through social media. “I launched the Social Media for Humans Club and absolutely love the community,” she recalls. Initially imaging the group would be LGBTQIA+ focused, Bushnell was fascinated how organically it shifted to being for neurodivergent business owners.

Today the project offers social media and marketing advice for “businesses with morals and manners” through its blog, podcast and YouTube channel. From mindful Instagramming, to copywriting and finding your way as a freelancer, the Club’s offering is broad.

Alongside this, Bushnell continues to provide social media management, supporting clients who she feels passionately about. Currently, Bushnell is working with Time for Kindness, a project which she says is important to her.

Bushnell describes herself as a queer demisexual cis woman. When first embarking on her career journey, she wasn’t always out with the people she worked with. “When I first started the business, I just didn’t mention anything about my Queerness. I kept it quiet, because I was worried it would stop people wanting to work with me.”

It was after a negative situation with a client that promoted her to think differently about being herself in the workplace. “They asked me to do something unrelated to my Queerness, but that went against my morals,” she recalls. “I realised that I actually don’t want to work with people who would have an issue with me being Queer, or indeed not being OK with skirting the grey areas of the law.”

Once Pride month came around, Bushnell nervously shared a coming out post on social media, and was surprised by the positive reaction it received. “The response was very supportive and I realised that actually the people who were drawn to me didn’t care about what labels I used,” she says. “It was powerful to realise that I was still the same person to them and it didn’t change anything at all.”

Bushnell adds, “It shouldn’t anyway, but there’s always that worry, so to realise I’d found ‘my people’ even while hiding a part of myself was amazing.”

In terms of advice for others thinking of coming out at work, Bushnell thinks it’s helpful to consider if the people who hired you would have still done so had they known about your sexuality or gender identity.

“For me that really solidified why I wanted to come out,” she explains. “And when it comes to actually doing it, expect to lose some people but know that they’re not your people.”

Finally, she argues that timing it key. “Make sure you’re in a place where you feel like it’s the right choice for you, and you’re not going to be in a really difficult situation if you do lose clients or leads.”

Alexis Bushnell is a social media guide and can be found on Twitter.