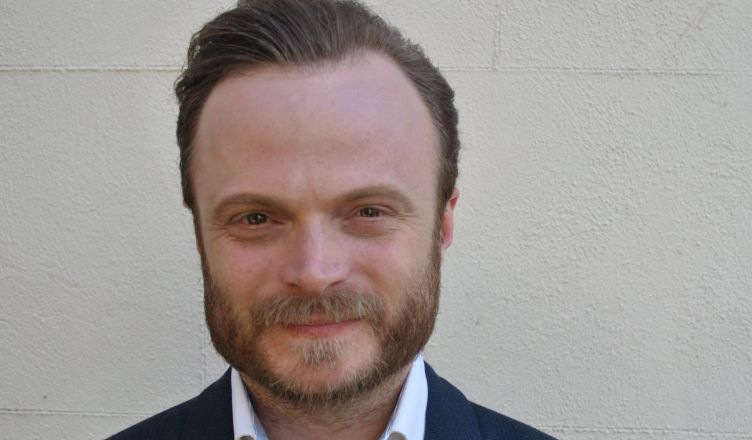 Being yourself at work is something that LGBTQ+ people continue to wrestle with. As part of our Out at Work series, Vada Magazine meets Dominic Arnall, the Chief Executive of Just Like Us, the LGBT+ young people’s charity. He talks about his experiences at school, leaving education early, and how he rose up the ranks of the charity sector to become a CEO.

Partly due to his experiences of bullying at school, Dominic Arnall dropped out of education before his A-levels, and went on to study music at his local community college. Arnall admits that he was never particularly academic, yet this gave him the opportunity to gain the grades he needed to study music at university, starting his degree at the age of 25.

“People are sometimes a little surprised to hear about my study background,” he says. “But in my experience people join the sector from really various backgrounds – there doesn’t seem to be one path.”

Since then, he has worked his way up the ranks of the charity sector, undertaking additional courses along the way in accounting, strategy and change management, to further his knowledge and skill set. More recently, Arnall spent four years as Head of Projects and Programmes at Stonewall, where he managed their education programmes, in addition to international projects with activists in the Western Balkans, Turkey, Russia and Eastern Europe.

“Working at the biggest LGBT+ charity in Europe undeniably shaped who I am,” he recalls of his time at Stonewall. “I worked incredibly hard and met some of the very best people in my field. It was a privilege.”

Arnall then embarked on a new challenge, by taking a job at the mental health charity, Mind. Here, he worked on their Time to Change campaign. Although he speaks highly of his time at Mind, Arnall would soon miss working in the LGBT+ inclusion sector.

“I had been looking for a role in the sector when the role of CEO at Just Like Us came up,” he explains. “It was exactly what I needed. I was thrilled to start and meet all the dedicated employees and passionate volunteers, it’s a wonderful place to work.”

The charity that Arnall now leads is dedicated to working with young people and schools, with a mission to empowering them to champion LGBT+ inclusion. The organisation sends volunteers into schools to champion issues around equality and inclusion, as well as working with schools to help them run LGBT+ and ally student groups.

“Like many LGBT+ people, I was bullied at school quite severely,” shares Arnall. “It’s an honour to contribute to making this better, and preventing anti-LGBT+ bullying for other people. I have met the parents of children who weren’t able to face it, which stays with you. I do it for them now.”

Despite the changes to laws and to some extent societal views towards LGBT+ people since Arnall’s time at school, just this year his charity published independent research that showed the ongoing negative experiences LGBT+ young people are going through at school.

The report, Growing Up LGBT+, found that LGBT+ young people are twice as likely to be bullied and contemplate suicide. Moreover, only 58% of LGBT+ young people have felt safe at school on a daily basis in the past 12 months, compared to 73% of non-LGBT+ pupils.

“There is a lot of work yet to be done,” says Arnall of the report’s findings.

Despite being the CEO of an LGBT+ inclusion charity, Arnall was not always out at work. In fact, he thought it might never be possible for him to be himself in the workplace when he was younger.

“I regrettably spent a large portion of my life in the closet,” he recalls. “I had thought it was how I would spend all my life. Until I started in LGBT+ inclusion, I had never met an out bisexual person at work, and I didn’t come out properly until I was 35.

“While there were some unhappy moments, it’s hard to have regrets about it. I so wish I had known more about what ‘bisexual’ was; I think a lot of young people today still grow up without hearing the word.”

Arnall came out in a national newspaper article, in response to a celebrity making comments about bisexual people spreading HIV.  He received various reactions from people: a lot of people said they already knew, whereas others didn’t seem to care at all.

“I had a few unpleasant comments, but for the most part it was relieving. I remember thinking that this secret wasn’t my responsibility any more.”

In terms of coming out in the workplace, Arnall believes people can take their time. “I think for the most part, LGBT+ people get pretty good at judging who they can and can’t be themselves in front of, and I’m always cautious to give advice. I would say trust your instincts, there’s no rush.”

Dominic Arnall is the Chief Executive at Just Like Us.