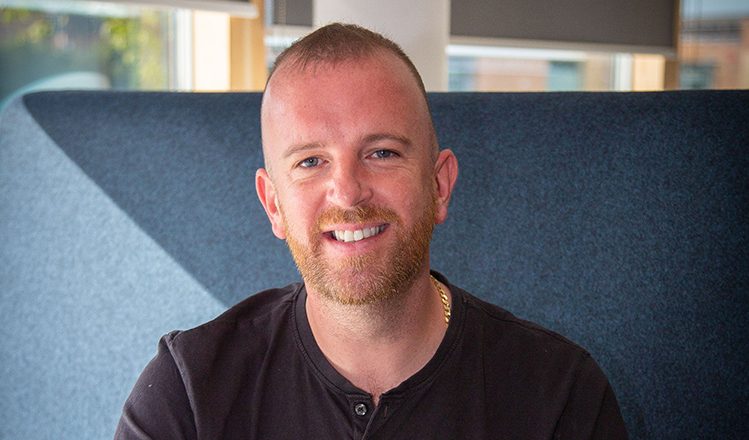 Being yourself at work is something that LGBTQ+ people continue to wrestle with. As part of our Out at Work series, Vada Magazine meets Drew Dalton, who is the Founder and Chair of ReportOUT, and Senior Lecturer in Sociology at the University of Sunderland. Having pursued his passion for Sociology, Dalton’s career path has straddled across education, the charity sector and academia.

“I guess I am between fields,” says Dalton of his CV. “However, setting up and running ReportOUT, a global human rights charity for sexual and gender minorities, and being a Sociologist and teaching about the nature of inequality and power, actually cross over with each a lot.”

He tells me that he always wanted to make his own little difference in the world, having been inspired by the people he found himself surrounded by whilst growing up in a mining village in the North East of England. It was here that he saw the impact that government policy and society has on working-class people’s lives; and their resistance to it.

“Then coming out as bisexual as an 18-year-old lad, it made me also see the levels of homophobia, biphobia, and transphobia out there, and so I know I wanted to do something to address it,” he adds. “But I didn’t know how.”

It was during this milestone moment in Dalton’s life, that he made another decision that would impact on his future career path. As the first person in his family to go to university, Dalton tells me he felt as though he did not have any guide as to what to study. Having originally thought about Archaeology, it was an advert for a degree in Sociology that would chime with his passion for human rights, sexuality and gender.

“I remember thinking to myself, that I could relate myself to my degree, and with Section 28 playing a role in all of my school life, this was significant for me,” he explains. “I ended up loving my degree so much that I did an MSc in Social Research afterwards, hooked on the idea of researching issues to create real social change in the world, especially for people like me and the queer community that I was now very much part of.”

In fact, Dalton enjoys his subject so much that he later pursued a PhD, where he studied older heterosexual people living with HIV in the United Kingdom.

Dalton recalls his first “big break” coming after graduating from university, having also worked throughout his studies. He become a Project Manager of a youth and children’s charity. “I was able to fundraise for, and do the scoping research for, the first ever LGBTQI+ project for young people in Northumberland, which I am proud to say, still runs today.”

Afterwards, Dalton trained as a secondary school teacher, where he taught Religious Studies, rising to be Head of Department. It was here that he realised that he wanted to teach adults, so switched his secondary school for colleges. Subsequently landing his role as Senior Lecturer in Sociology at the University of Sunderland.

That said, he didn’t leave the Third Sector behind. “I volunteered and worked in a range of roles alongside this, supporting people at risk of self-harm and coming out, setting up an organisation for people living with HIV, being Chair of an organisation that supports LGBTQI+ Muslims and working in human rights campaigns.”

Dalton tells me he is a strong believer in “giving back”, which is something that he was taught from an early age. “This is developed from my own community who had little, but would give a lot to support each other. As a Muslim myself, it is also in my ethos to give to charity as one of the five core beliefs of my faith, but that is another coming out story altogether…”

Despite having taught in adult colleges, Dalton admits to feeling nervous and a touch of imposter syndrome when he pivoted into his current role in academia. “But I think this is very classed,” he reasons. “Growing up, the concept of having everything provided for me to advance in my career was alien to me. I did not know the correct things to say or do, but my working-class outspokenness has certainly helped me to become an activist and it certainly helps in class to boom my voice around the room. I love my job though, I get to inspire others, from similar backgrounds to see different opportunities in life.”

Speaking of activism, Dalton also founded and is now Chair of ReportOUT. “This was a minefield at first as I wanted to make sure that getting the global dimension was right,” he recalls. The human rights research organisation seeks to report, inform and defend against human rights abuses towards sexual and gender minorities across the globe.

Dalton says that establishing the organisation felt like an accumulation of everything that had come before in his career. “I was very nervous upon setting it up and entering the global human rights arena. After completing our first big research project with LGBTQI+ partners in Uganda, I cannot tell you how much I could sit back and breathe afterwards.”

RELATED ARTICLE  Why I support the fight against sickle-cell anemia

Other than when he was working in schools, Dalton explains that coming out at work has been mostly easy. That is, however, with the exception of some people’s reactions to his bisexuality. “As a bisexual man there is always a ‘threat in the air’ as we simply are not trustworthy in many people’s eyes, which is sad,” he adds. “But this makes me determined to be out and open to this day. Today, I fly my bi flag colours high.”

With that in mind, what advice would he give to somebody thinking about coming out at work? “In education we need more people to come out. In the Third Sector, we are leading the way with this, but this is not always acknowledged,” Dalton replies. “My advice would be to own being you, as nobody else can be you, so if you are comfortable and safe, then be out and proud.”

Drew Dalton is the Founder and Chair of ReportOUT and a Senior Lecturer in Sociology at the University of Sunderland.