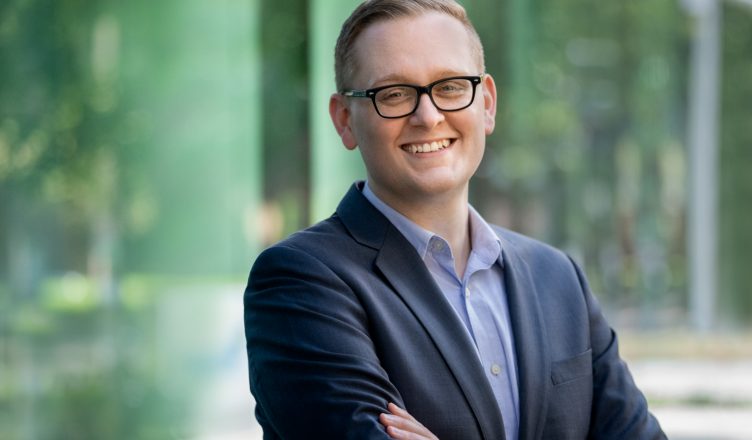 Being yourself at work is something that LGBTQ+ people continue to wrestle with. As part of our Out at Work series, Vada Magazine meets the biotechnology leader, Mark Charbonneau. He leads a team of scientists as part of his role as Senior Director, Head of Translational Science at the biotechnology company Synlogic, Inc, and recognises the importance of authenticity when in a position of leadership.

It has been a decade since Charbonneau came out at work, whilst he was at graduate school. “I found it very challenging to come out at first, largely because of the internalised negativity I had about how my sexuality reflected on me as a professional. I’ve overcome many of those attitudes and have been out in every role since.”

His career journey in biotechnology began as a first-generation university student at Michigan State University, having always been interested in biology, chiefly learning about the human body and the bacteria that live inside it. Charbonneau initially pursued a degree in Microbiology and Molecular Genetics, which lead him to work in academic research laboratories at the university.

It was here where his passion for biotechnology was fuelled, and resulted in him moving to Washington University in St Louis, to undertake a PhD in Computational and Systems Biology. “Here I used computational tools to study how microbial communities that live within the infant gut contribute to healthy growth and development,” Charbonneau explains.

After completing his PhD, he began working for a startup company, which focused on developing growth-promoting microbial consortia in agricultural animals. “In this role, I led efforts to establish pre-clinical models and computational tools to define beneficial bacterial strains in animals,” he says. “This role was a fantastic learning experience and was an important first step into the world of biotechnology.”

He landed his current role at the biotechnology company, Synlogic, by searching for organisations that mirrored his interests and networking with people who worked for them.

“I was drawn to this opportunity first because the company’s approach centres directly on mechanisms that address human disease. Secondly, given the novelty of developing live bacterial therapeutics, this role represented an opportunity to build the fundamental tools and approaches required for translating basic research into therapeutic applications as well as to influence the direction of the field.”

Yet despite his qualifications and experiences, Charbonneau admits that he felt intimidated when moving to his current city, Boston. “I was the new kid in town, surrounded by elite universities and peers who’d been steeped in the world of biotechnology entrepreneurship,” he recalls. “It took a lot of hard work and ‘proving it’ to myself to overcome the impostor syndrome I felt when I started.”

Now in his fourth year at Synlogic, Charbonneau has risen through the ranks of the company. Starting out as a senior scientist, his job titles have included Associate Director and Director of Quantitative Biology, and now Senior Director, Head of Translational Science.

Having been ‘out’ at work for over ten years, he tells me that the reactions he has had from colleagues about his sexuality has been overwhelmingly positive and supportive; something which he credits to the “generally more accepted environment” of academia. Charbonneau’s current workplace, for instance, participated in Boston Pride the year he joined the organisation.

“If I was able to tell my teenage self that I’d not only be out at work, but that my identify would be embraced, I probably wouldn’t have believed it,” beams Charbonneau.

What is his advice for anyone thinking of coming out at work? “Coming out is a very personal decision, and individuals should consider their own circumstances and level of comfort with being out at work,” he reasons.

“I’ve found being out at work to be liberating and empowering – it enables me to be my authentic self in my professional life as well as my personal life.” As a leader, he also recognises the importance of being a role model for colleagues. “I also feel that it is important to demonstrate that being out in a professional setting is acceptable for others that may feel less comfortable.”