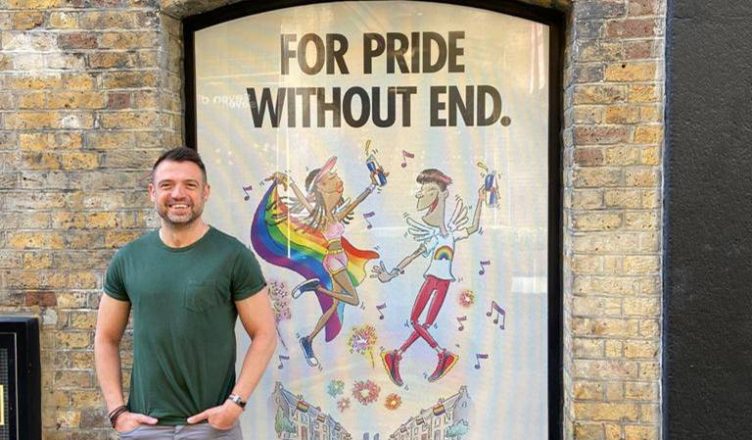 Being yourself at work is something that LGBTQ+ people continue to wrestle with. As part of our Out at Work series, Vada Magazine meets Shopper Development Manager, Neil Sharp. He explains how being in the right place at the right time landed him his current role at Red Bull, and gives advice to fellow LGBTQ+ people thinking about coming out at work.

Neil Sharp thinks it was the career that found him, rather than the other way round. After spending a year studying music and performing arts at university, he realised the course wasn’t for him and he dropped out of the degree.

He began at Marks & Spencer, moving up the rungs of the career ladder with various roles covering buying and marketing for clothing and homeware.

“Each of these roles offering me new experience and development opportunity,” Sharp tells me of the eight years spent with M&S.

It was then onto TM Lewin, a British online menswear retailer, working in similar roles to his previous company. After a couple of year here, Sharp wanted to move into fast-moving consumer goods.

“I’d never done it and wanted to,” he says of the transition. “An opportunity came up to join Tesco, where I worked in Seasonal Event and Category Activation roles for the next six years.”

Sharp then arrived into his current role with Red Bull, where he currently heads up the shopper marketing team.

“It was being at the right place, at the right time,” he says when I ask how he landed the job. “I was already working with Red Bull UK on the retailer side, on some really exciting projects. After a trip with them to the Red Bull mothership in Austria, I truly fell in love with the company. As if the planets had truly aligned for me, that was when this role came up, just over two years ago.”

When I ask about his experiences of being LGBTQ+ at work, Sharp considers himself to be lucky.

“I’ve always worked in an industry where being LGBTQ+ is almost part of the DNA,” he says. “Being out at work is something that has come naturally.”

That being said, he shares that he has not always felt able to be truly out with his colleagues.

“I’ve always felt the need to be some sort of homogenised version of myself – playing it ‘straight-er’ – and just finding something else to do when the lads all spent two hours talking about the football,” says Sharp.

He considers himself to be a “generational victim of Section 28”, having been brought up during an era where many feared the consequences of being their true selves.

For Sharp, he worried that his sexuality would damage his career in some way: “Although I’ve risen above it, there are some vulnerabilities you never quite shake.”

Speaking of the time prior to starting at his current company, Sharp tells me he fears that his career progression may have been slowed down, through being overlooked by other colleagues.

“If you’re not the right ‘fit’ you get overlooked,” he recalls. “Classic culture of workplaces that are quite happy to put the Pride bunting up in July, but when it comes to real people, you’re left wondering why you matter less the other eleven months of the year.”

Things changed when he joined Red Bull. “For starters, one of the Red Bull company values is, be yourself. Why? Because that’s exactly what they want – you,” Sharp explains.

“As a business and brand it regards people’s strengths to be the main focus, not their weaknesses. It celebrates and nurtures that.”

Initially struggling with the workplace cultural shift, Sharp recalls his boss sitting him down and saying, “I give you permission to be your full true self.” Since that day, that’s exactly what he brings to his workplace every day.

Sharp now recognises the importance of being yourself at work, saying that LGBTQ+ people add “incredible value” to a company’s culture. However, he is also aware that not all companies are safe spaces for all employees.

“Your personal feeling of safety, comfort and acceptance of yourself and your sexuality is paramount to you, your happiness in work and most importantly, your personal well-being,” he argues. “People should never underestimate this.”

Sharp’s final parting words of advice for anyone thinking of coming out at work are, “Just always remember to be proud, be yourself, and take your colleagues on that journey with you. Help them feel comfortable with being curious, asking questions, sometimes getting it wrong, and learning what matters.”

Neil Sharp is a Shopper Development Manager at the Red Bull Company Ltd. If you would like to be featured in our Out at Work series, please contact Vada’s features editor, Hadley Stewart.