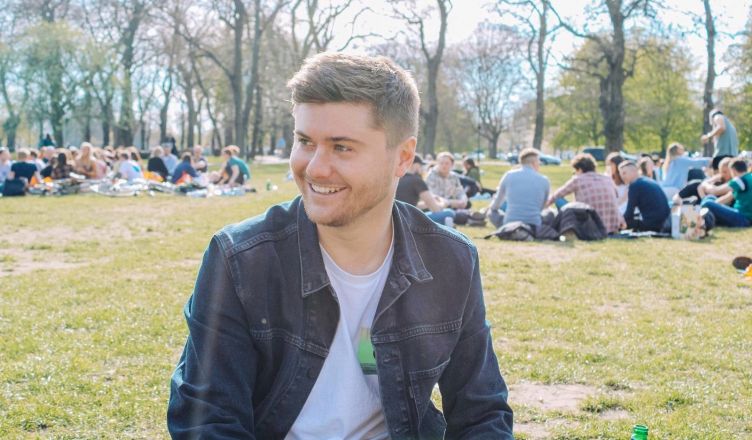 Being yourself at work is something that LGBTQ+ people continue to wrestle with. In the first of our Out at Work series, Vada Magazine meets Sam Mehmet, who works in public relations. He shares his career path to date, and how joining his current company during a pandemic has impacted on the way he works.

With aspirations of becoming a journalist, Sam Mehmet graduated with a degree in English and French from the University of Nottingham. Initially unsure of which path to pursue, he landed a job at as a Junior Editor at a publishing house in Kent.

“The publishing house managed several trade publications, ranging from food and pharmaceuticals to urban transport and airports, and I ended up writing for the food and urban transport magazines,” Mehmet says of the wealth of experience this debut role gave him.

Despite the variety of clients he worked with, he decided to specialise in food. He didn’t know it at the time, but this decision would serve him later on in his career.

“I quickly learnt that food is an everyday part of life and brings people together, but that the complexities and interconnected nature of the food system are easily forgotten,” explains Mehmet.

“There is so much pressure to feed our growing world safely and sustainably as well as navigate evolving challenges like public health and food-borne illnesses. Communicating these challenges, and the incredible innovations and solutions being developed to combat them, is where my passion grew.”

Having worked as a Junior Editor for a year, he connected with the founder of the company he would eventually work for through social media. She spotted an article Mehmet had written for one of his food clients, and the pair soon were engaging in discussions about setting up a potential collaboration.

“Following several conversations, it was clear we had a similar passion and that my values resonated well with the company’s,” he says of the courtship. “And a few weeks later, I was hired as the Content Manager.”

Greenhouse, the company where Mehmet has worked since September of last year, specialises in pioneering clients that are driving positive social and environmental change; two issues that are close to his heart. The hope is, he tells me, for a more sustainable future for our planet and its population.

“With clients in sectors ranging from food, nature and biodiversity to transport, energy and clean technology, the company provides PR, strategic advice and digital support in all shapes and sizes,” explains Mehmet.

Mehment’s start at Greenhouse was during the coronavirus pandemic. It would see him integrating a new company, whilst working remotely. Yet, even he didn’t imagine that 10 months later he would still be working from his spare bedroom.

“Although I would much rather be working in the office, Greenhouse has made such an effort to make remote working as easy and seamless as possible,” he says. “My support network of work friends and colleagues has also been undeniably fantastic.”

Said spare bedroom is in South East London, where Mehmet lives with boyfriend, Kieran. Given that LGBTQ+ don’t always feel comfortable being themselves at work, has being out at work ever been an issue for him?

“It’s something I have never really considered. I have never actually knowingly come out to any of my colleagues or clients.”

That being said, Mehmet shares that one of his “Lunch & Learns” lunchtime training sessions at his current company made him think about this issue further.

“There was one particular Lunch & Learns titled ‘Being LGBTQ+ at Greenhouse’ where a colleague talked through what it means to be LGBTQ+, the importance of pride month and some of the challenges that LGBTQ+ people face in life and at work,” he recalls.

“The session really gave me a boost; perhaps one I didn’t even realise I needed. It made me feel more comfortable and it was amazing to hear so many of my colleagues engaging and asking questions about the LGBTQ+ community.”

In addition to this, he credits his peer-to-peer LGBTQ+ group as a support mechanism. The group message each other funny and important news stories, and set up virtual social events. Mehmet says he is hoping for in-person events, once restrictions allow for them.

So, does he have any advice for someone who is thinking about coming out at work?

“The only advice I could give to someone is to not overthink anything and be yourself, as cliché as that may be! I have found in life that, nine times out of
ten, people will not even blink twice; and those that do are usually navigating their own personal challenges too.”

Out at Work: Alexander and William Deakin, the brothers of finance