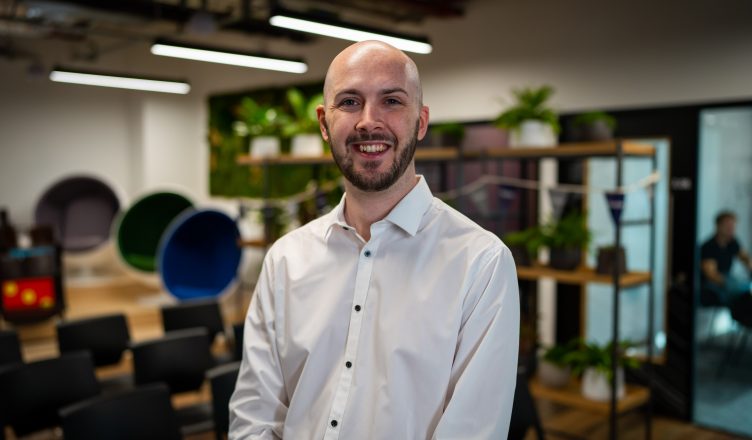 Being yourself at work is something that LGBTQ+ people continue to wrestle with. As part of our Out at Work series, Vada Magazine meets Will Shillibier. As the European Executive Editor at PokerNews, he has been able to combine his passion for playing poker with journalism, all the while staying true to who he is.

Will Shillibier started playing poker whilst studying German at the University of Kent, having joined the poker society. “Yes, there was such a thing,” he says. And when he wasn’t playing cards, he was presenting student radio.

During his time at university, he recalls going to a talk about how to become a journalist, something which Shillibier knew he wanted to pursue. The piece of advice that he latched onto was, “It’s not about wanting to write, it’s about having written.” Words that he took seriously, resulting in him starting up his own blog about poker.

“I figured that was what I was into at the time, and so that was what I would gain the most enjoyment from writing about,” he says of the blog. He would watch live streams of events, sliding into the DMs of poker players and quoting them in blog posts. “Just to get the experience of writing about poker.”

Shillibier’s passion saw him travelling to events across Europe, including Barcelona, Berlin and Malta. It allowed him to play poker, as well as getting to know the players and media landscape that surrounded the game. During his year abroad, Shillibier attended the 2015 European Poker Awards in Malta, posting on Facebook upon his return of how much he had enjoyed his time away, but that it was now time to focus on his university studies.

“Within a week I’d been contacted and asked if I wanted to do some reporting for PokerNews in Monte Carlo the next month,” he recalls. “Someone recently said that it’s this level of tenacity that pays off for people, and I completely agree.”

Having finished his exams, Shillibier embarked on a trip to the 2016 World Series of Poker. “There was a poker player who was famous for talking a lot at the table,” he tells me. “I was trying desperately to scribble down everything they were saying because while it was potentially annoying to players at the table, it was also incredibly entertaining to listen to and write up as a fan.”

The following year, and with additional skills in shorthand, he would attend the same event with slightly less frantic scribbling. Perhaps it’s not something that the National Council for the Training of Journalists anticipated its alumni to use shorthand for, but for Shillibier it worked out well. “It meant that when I was reporting on this particular player, I could get down everything they said word for word,” he adds.

In the three years that followed, there weren’t many poker tours or events that he didn’t travel to. From Melbourne for the Aussie Millions, to Marrakech for the city’s Poker Open, and several stopovers during the European Poker Tour to boot. “I once visited Sochi, Russia three times in one year,” he marvels. “I can’t imagine I’ll be doing that again any time soon.” Suffice to say, Shillibier was fulfilling his true passion.

So in 2019 when PokerNews came calling with a full-time role, he jumped at the opportunity. He is currently the European Executive Editor for the website, having freelanced for them prior to being offered the position. “Obviously I instantly accepted and I’ve been with them ever since.”

Away from work, Shillibier has also been fortunate with the support of those around him. Having come out as bisexual on New Year’s Eve, during his second year at university, he says he has been “out and proud” ever since. With regards to being out in the workplace, he says being in a same-sex relationship when finishing his NCTJ diploma meant that he was already out at the start of his media career.

“Most of the people I now work with met and got to know me while I was in a same-sex relationship,” he recalls of that time. “Which I think definitely means I’m more comfortable with being myself around them.”

The poker industry, Shillibier tells me, is no stranger to LGBTQ+ stars. In fact, he recently held an LGBTQ+ meetup in Las Vegas during the World Series of Poker. “It was great not only to see the people who attended, but also the support from players and people in the industry for the event.”

When thinking about the poker industry, compared with other competitive fields, Shillibier comments on the lack of rumours that surround being LGBTQ+ in poker. “The industry doesn’t seem to have as much speculation about when the next LGBTQ+ poker player will come out or whether a player is LGBTQ+,” remarks Shillibier. “And that has definitely made it a comfortable industry to be out in.”

Will Shillibier is the European Executive Editor at PokerNews and lives in Reading, England. Main photo provided by Will Shillibier.