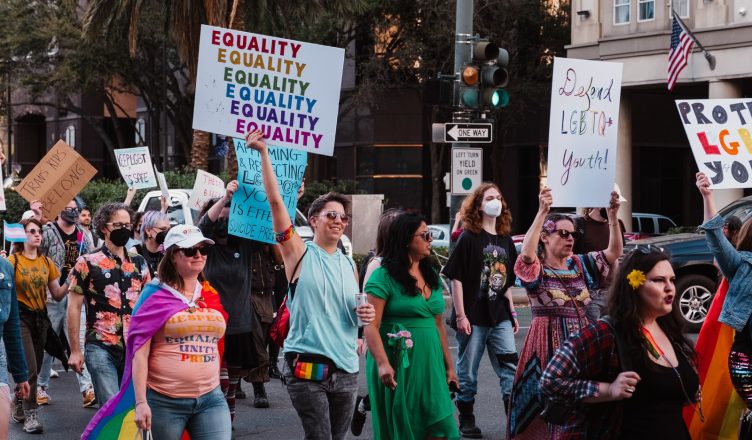 Speak Out Sister is a new group formed to represent trans-inclusive feminism and challenge the disproportionate media coverage given to the small minority of transphobes who claim to be feminists.

We spoke to the group to find out what their aims are and why they’ve come together now.

‘Speak Out Sister is the result of a small group of women feeling frustrated that the public image of feminism has been hijacked by anti-trans groups and that women’s basic rights were being threatened as a result,’ a spokesperson for the group said.

Speak Out Sister feels strongly that anti-trans groups are closely tied to other forms of bigotry, and that by allying themselves with those who oppose women’s rights, such groups are actually working against women’s rights while claiming to support them.

‘The most obvious example of this is how anti-trans activists are allying with anti abortion groups and individuals, particularly from the USA.

‘Meanwhile, in the UK, the Keira Bell court case was an attack on Gillick competence and one of the lawyers involved, Paul Conrathe has been involved in numerous cases to limit abortion rights, including a case where a man tried to stop his ex-partner having an abortion. This will limit the ability of young women and girls to advocate for their own healthcare.’

This seems to be intentional, rather than a coincidence, the group feels.

‘With the attack on Roe v Wade in the USA, women’s reproductive rights are coming under attack all across the globe.

‘We can’t afford to be complacent in the UK — for instance, rights to telemedical abortion were recently nearly lost after evangelical groups flooded a consultation, and this important service for women was only saved after MPs rebelled. But groups that call themselves feminist are allying with anti-abortion activists because they are also anti-trans.’

The problem isn’t just one for trans people, Speak Out Sister says.

‘We represent trans inclusive feminists who also oppose other forms of oppression including racism, ableism and homophobia. We support sex workers’ rights and women’s sexual autonomy. We see attacks on trans people’s rights to healthcare and transition as attacks on their bodily autonomy,’ the group says.

‘The attacks on trans people’s rights are becoming more acute in tandem with the attacks on women’s rights, and we felt it was vital that trans-inclusive feminists speak out now to challenge the depiction of transphobia as feminism.’

We asked them what’s ahead for Speak Out Sister.

‘We’re very new and at present are a small group of women who all have other commitments, so we’re looking for ways to increase representation of trans-inclusive feminist voices while bearing in mind that so many women everywhere are facing real challenges in terms of just being able to pay the bills.’

But the response so far has been very positive.

‘We’re really pleased with the response to our launch on Twitter, which shows how many women are frustrated with the current situation. We’re looking at ways to provide a voice for these views, both in the media and politically, and refocus the conversation positively around issues of real importance.’

You can find Speak Out Sister on Twitter at @speakoutsister.