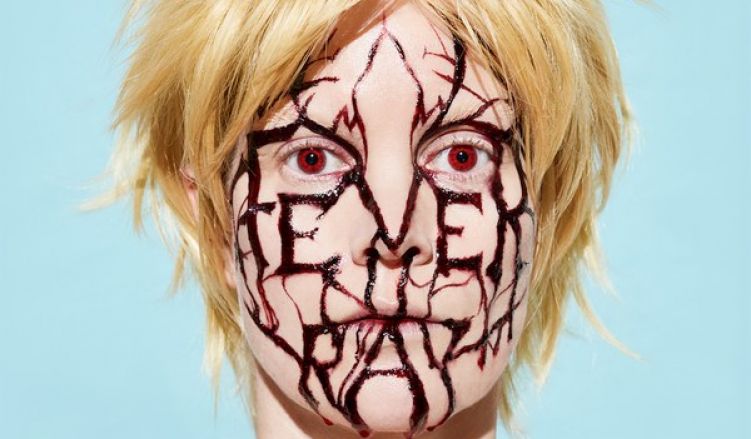 Fever Ray may not have had a new album out for  8 years now, but as soon as the first track from the surprise-realised Plunge is heard it feels as though almost no time has passed at all. ‘Wanna Sip’ opens like a dramatic and camp, hammer-house horror film and ties in perfectly with the blood-drenched Karin Dreijer on the album’s cover before settling into what can best be described as a rave-hard, experimental pop song, but a pop song nonetheless. Last heard on The Knife’s apparently final album Shaking The Habitual, Dreijer thankfully does not return to the avant-garde inaccessibility of that record but with more of a return to the brother and sister duo’s exceptional, hedonistic and sometimes-dance album from 2004, Deep Cuts.

After the excitement of ‘Wanna Sip’, Dreijer temporarily retreats into a quieter but unsettling place for the remainder of the album’s first third. ‘A Part of Us’ overwhelms with surface noise – cartoon squeaks, hi-hats, zig-zagging synth lines – and rare use of auto-tune, especially when compared to Fever Ray debut where its presence was essential. But the mood is still reflective and strange, just when you think a beat will eventually kick in, it retreats again. Weirder still is the noisy drone of ‘Falling’, chilling and industrial it’s a hair-raising 5 minutes.

‘IDK About You’ has a mad, sexual energy and an appropriate speeding tempo that picks up all manner of breathless, human effects as it pounds along whilst Dreijer reassures her partner that she understands what the rules are, but hey! – how can she be certain that they do? ‘Free abortions and clean water, destroy nuclear, destroy boring…this country makes it hard to fuck!’ are the bumper stickers on Fever Ray’s protest rug-sack and whilst ‘This Country’ may be the most overtly political song on Plunge it also one of its funniest and most enjoyable.

‘To The Moon And Back’ begins with Dreijer reintroducing herself back onto the scene and is the album’s massive pop track, as big as Deep Cut’s ‘Heartbeat’ but more fidgety, filthy and fun. It’s the first of the four tracks that sit at the end of Plunge and which make up the album’s most fascinating and diverse section. ‘Red Trails’ links extreme pain and pleasure with violin-folk reminiscent of performance-art icon Laurie Anderson and the brilliant ‘An Itch’ speculates on the seemingly absurd notion of intimacy with someone you love.

Unlike Fever Ray’s self-titled debut album with its meditative, sombré moods and precise sense of control and order, Plunge lives up to its title and captures a freedom and spontaneity that Karin Dreijer indulges with a frenzied and frequently addictive abandon. Jump in.