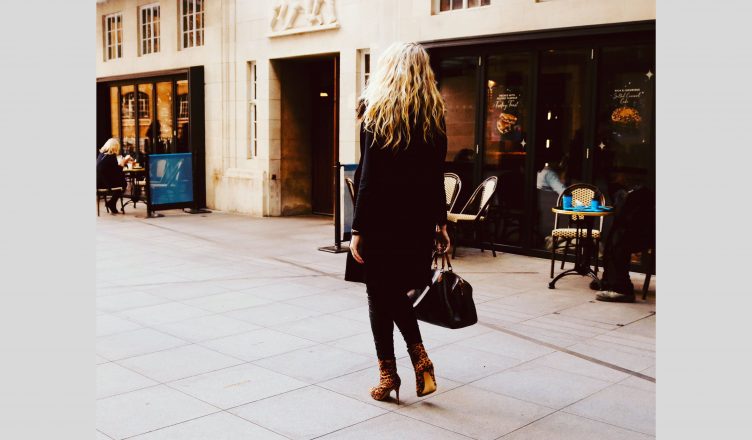 The producer behind the BBC Newsnight interview with Prince Andrew and author of Scoops, sits down with Vada to share her next chapter.

Sam McAlister is the person responsible for securing an interview with Prince Andrew, which rocked the nation, an establishment and made Pizza Express Woking part of our lexicon. It was undoubtedly the scoop of our time, yet it was one of many scoops that McAlister worked on during her time as a producer at Newsnight: Julian Assange, Amy Schumer, and Justin Trudeau, to name a few.

Scoops, therefore, seemed like a fitting title for her book recalling the decade working at the news and current affairs programme. “It just came to me in the middle of the night,” she tells me. Towards the start of the pandemic, McAlister contracted Covid. It hit her hard. It drained the energy from her. It left her with insomnia. Whilst the latter helped her come up with the title for her book, the virus stopped her from being able to work.

When McAlister did return to the BBC, the interview with Prince Andrew still making headlines and its consequences making waves on both sides of the Atlantic, it was time for her to move on. She is no stranger to not conforming to the linear career path: the first in her family to go to university, McAlister studied at the University of Edinburgh and embarked on a career as a criminal defence barrister. It was whilst sitting in a motorway service station, after a particularly trying day, that she realised being a lawyer wasn’t for her.

McAlister pivoted, moving into journalism after doing work experience on a legal programme at the BBC. With her, she brought legal knowledge and experience of mastering the art of negotiation. It was this artform that enabled her to nurture crucial relationships behind some of the world’s most revealing interviews.

But in July 2021, she tweeted a photo of her walking out of New Broadcasting House, which announced to McAlister’s Twitter followers that she had left the Corporation. Amongst the tweets of congratulations, perhaps what everyone really wanted to know was, what was next for Sam McAlister?

Months later, it was another tweet, inviting me for a cocktail, that would see McAlister and I meeting for the first time in a member’s club in west London. Scoops had just been announced, but I was yet to read the book. I had no idea what to expect of McAlister and I felt nervous. “Really?” McAlister replies, when I admit this to her halfway through our meeting. The truth is, I thought she would be scary and intimidating. She is, after all, a media doyenne with a killer collection of designer boots. I needn’t have worried.

Something that struck me straight away was McAlister’s manner. She treats everyone the same – with politeness and respect. She would later tell me this was one of the secrets to negotiating. And despite having only just met her, she seemed to know exactly how to put me at ease. I suddenly realised why a decade’s worth of interviewees trusted her, especially when the stakes were so high.

“For anyone who knows me, they know that I love humans, I love talking to people, and I love being compassionate and kind,” she tells me over the phone, following the publication of Scoops. She says that whilst she didn’t exactly grow up wanting to write a book, this one was a necessity for her. As she writes in the book, TV producers are often “largely invisible”, despite the key part they play in getting an interview on air. “I just felt that I needed to write the book, because I felt that my career and my part in the story of the Prince Andrew interview, was something that wasn’t in the public domain. And I wanted to put that story to the people who were interested in it.”

The reason we are speaking over the phone, rather than in person, is that on the day we are due to meet for the second time, McAlister is juggling several interviews with international broadcasters. They all want to quiz her about her book and that interview.

I ask her how she felt whilst watching the Prince Andrew interview on the sofa with her partner, along with the rest of the nation, back in November 2019. “There was definitely an element of pride and achievement,” McAlister beams. “I’ve worked in this field for a long time, but this was just beyond anything that anybody who does my job could have hoped for. It’s beyond your wildest imagination in terms of synthesising the best of journalism.”

At the same time, she admits feeling fearful. It was perhaps irrational fear, she adds, looking back at it now. The neighbour told her that they had spotted paparazzi outside her home. “It was probably some kid doing an Instagram post,” she jokes. But it wasn’t just papp-spotting texts that were making her mobile buzz. Messages of praise from friends and colleagues, the social media wheels turning at full speed, and the push back from people who held the Royal family in high esteem. “And then you’re also just thinking, wow!” she says. “You’ve been part of a team that’s brought down a member of the Royal Family, and that’s obviously quite a big deal.”

McAlister went back to the Newsnight office on the Monday following the interview being aired. “It was a bit like Piccadilly Circus,” she recalls. “The great and the good came to visit to congratulate us and to pass on their various observations. It was a bit like being a very popular kid at school. We were suddenly the focus of a lot of attention and interest within the building.”

So why give up a job at the BBC, I ask. Whilst she speaks glowingly of the experiences that working at the Corporation gave to her and the people she worked with during the years, McAlister does share the downsides. “I think the BBC sometimes is quite a restricted place to work,” she reasons. “Whether it’s restrictions based on what you want to say or do, or restrictions based on career progression or salary. In my case, there were roadblocks and like all things in life, you either accept the roadblocks or you do something different.”

I venture to ask her about the mass exodus of talent at the BBC. Emily Maitlis, who interviewed Prince Andrew, has also since left. Other BBC presenters, have also followed suit, along with those who work behind-the-scenes, whose resignations and redundancies have not made the headlines. McAlister says she can’t comment on somebody else’s departure, which feels fair, but she does have something to say about workplace culture. “Sadly, with all the cuts that relentlessly come every 18 months, you’d be waiting to see if you’re going to be sacked. It can be, perhaps, quite a difficult place to work at times.”

It was a huge risk for McAlister to leave the BBC. She is a single mother, who was working part time, on a salary that was certainly a far cry from the figures quoted in the media about “on air talent” at the BBC. But with her departure and the publication of Scoops came some other good news. As well as the freedom to do interviews and be a speaker at various events, the book is also being adapted for the big screen. “It’s all a bit mad,” she reflects on this new chapter. “If you start from the position that I’ve never written a book, you’d think this was obviously quite a risk to take. It wouldn’t be in anyone’s wildest dreams that I’d be working on a screenplay now too.”

If anything, it feels like the stars have aligned for McAlister. As well as being asked about which actor she wants to play her in a film, something which she admits is a fun game to play, she is now working with BAFTA-winning screenwriter and former barrister, Peter Moffat. A fellow career-pivoter, Moffat and McAlister used to work at the same chambers, a decade apart. The magic of this isn’t lost on McAlister, “That is a synchronicity and a half, isn’t it?”