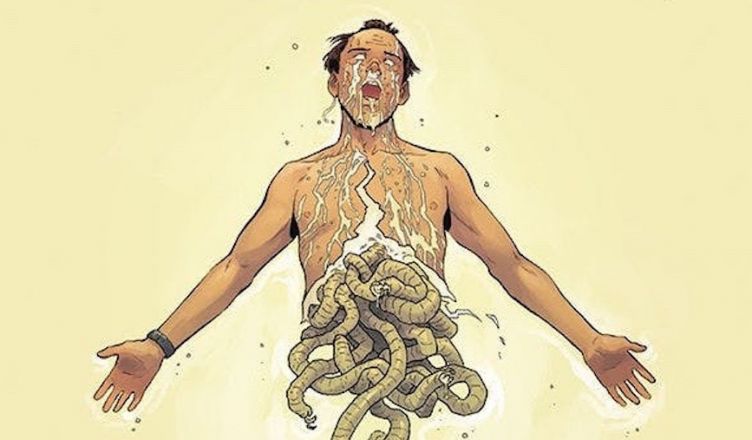 William Gibson’s Alien 3: The Unproduced Screenplay is a what-if from the 20th Century Fox Uncovered series. Adapting the second draft of William Gibson’s version of Alien 3, which was famously never made but long sought-after by die-hard fans, it offers an interesting but less than essential alternative to the movie we got. In doing so, it increases our appreciation of the final film, despite its flaws.

As someone who has read all the available unproduced scripts for Alien 3, I have to admit that Gibson’s story was never my favourite. Vincent Ward’s script, despite some impractical ideas, was probably my favourite of the unproduced scripts (though much of its DNA makes its way into the final film), followed by David Twohy’s (who later went on to write Pitch Black).

The final script used in the film was actually the superior text, as shown by the 2003 and later cuts of the film, which stand up pretty well against this alternate version. It combined the Gothic-Catholic overtones of Ward’s script without the cheesy sheep alien (complete with woolly coat) and the radically different tone that would have been had by setting the story on a wooden planet in space (admittedly, with a mechanical core and fake atmosphere).

The subplot with Golic in the Special Edition/Assembly Cut was actually really interesting, and the bleak prison planet setting is more in-keeping with the grimy, industrial future of the previous movies (something Ridley’s later prequels sorely missed).

Gibson’s story, for me, was just too goofy. People shed skin to turn into aliens in comical fashion without any identified mechanism for this, and alien biology radically changes.

For example, an egg grows in Bishop’s midriff due to insertion of alien material from the queen at the end of Aliens. How this grows from synthetic material is never explained, and leaves as many questions, if not more, as the Alien 3 we ultimately ended up with (where a ‘royal’ facehugger was laid onboard the ship by the queen and went on to impregnate Ripley and a dog or ox).

Fanboys of Aliens, who had hoped for a sequel in line with that action extravaganza, often complain that the egg at the start of Alien 3 is never explained. But that’s not quite true. Aliens ends with the sound of an egg opening (a gag, admittedly) which was always presumably to leave space for a sequel. We know the queen was an egg-layer, too, so seeing an egg onboard the ship doesn’t really need too much explanation. The biggest question is where the egg or eggs were laid – the obvious answers being the dropship or the armoury off the dropship hanger bay.

This comic highlights the goofiness by giving its shapechanging alien burning red eyes and a skull-like face. People rapidly change – their skeletons reshaping, heads elongating, skin tearing away – like, well, something from a comic book.

The Cold War political conflict at the heart of the script is also a common trope of Gibson’s work, but is dated, and hasn’t aged well. Space marines versus space commies versus airborne aliens is as silly as it sounds.

The comic itself improves on the second draft of the screenplay but never quite manages to escape the daftness of it. It’s not Eric Red silly (his draft had inanimate objects, including an entire space station, turning into aliens), but it doesn’t quite hang together. It needed at least another pass to fix the B-movie whiff and give it the consistency provided by a Giler and Hill rewrite (it’s they, after all, who usually clean up the dialogue and make Ripley sound like Ripley, rather than a pissed off gym teacher).

Hicks is okay as a hero, but Ripley is sorely missed. He doesn’t have the same nous or charisma. The one scene where Ripley wakes up, attacks the intruders on her ship and promptly ends up catatonic doesn’t do justice to her character and is, dare I say it, more regressive than the representations in the previous films. Hysterical, fainting Ripley is not the heroine we know or care for.

Likewise, Newt is shipped off to Earth. That’s two female characters dumped to focus on Hicks and Bishop – a bit of a weird choice for a franchise that had, until that point, been so consciously focused around a woman. It increases the testosterone, but doesn’t give us the same balance Ripley represents. That’s another strike against it.

Whether you liked all the character deaths in Alien 3, it certainly gave us closure. The autopsy scene was heartwrenching and tragic, and the funeral scene powerful in Alien 3. At least the loss of two characters had gravitas.

I also think Ripley’s arc (as a veteran coping with the loss of everyone and everything she holds dear) is far more powerful in the final film than the stories of Hicks and Bishop here – who don’t really change over the course of the script. As narrative glue, they’re not enough to hold the thing together.

There’s a lack of tension and reward, too, underscored in this imagining by the overly bright and clean setting. The setting in the original script is actually more interesting than this: it’s a half-constructed space station with lots of dark corners and skeletal construction work which would have been really interesting for an Alien film. For some reason, the comic opts for light colours and clean spaces, whereas interstellar noir would have worked much better.

You can see through the various iterations of the third movie where the studio had clearly asked for specific things (transforming or mutant aliens appear in every draft, resulting in the more organic runner alien concept in the film) which later crop up in Alien Resurrection and the prequels. It’s perhaps the obsession with presenting different versions of the aliens for each subsequent movie which spoils those scripts (and makes the Newborn in Resurrection so naff).

While Alien 3: The Unproduced Screenplay is certainly an interesting read, it serves to vindicate producers Giler and Hill in producing the version of the film they ultimately did. While an interesting footnote in the Alien mythology, Gibson’s Alien 3 was never really a viable movie idea. As a comic, it’s an interesting alternative universe, but only essential for completists.

Marvel or DC: Whose writers come out on top

X-ray vision: A look at the upcoming X-Men franchise movies