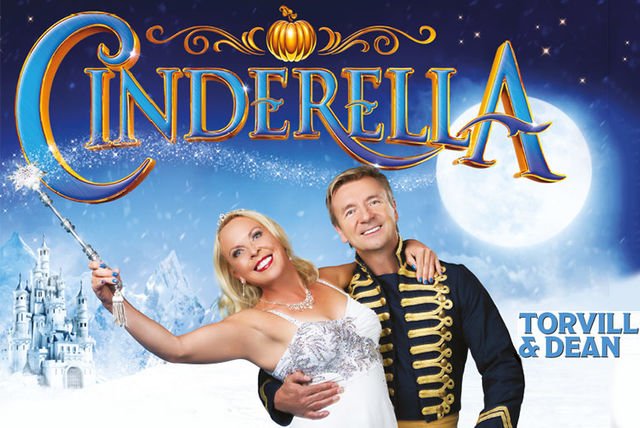 Never in my born days did I think I would witness with my own two eyes Torvill & Dean’s bolero, but last night, at Cinderella at the Manchester Opera House, I did… And it was on rollerblades, no less. Not only that, but with some silk dancing thrown in. And smoke. And people dressed as rabbits.

And ponies. Legit ponies in a theatre. ACTUAL REAL LIFE PONIES ON STAGE! Are you kidding me?! I’m still absolutely losing my shit. Honestly, someone needs to get me an iced coffee from Starbucks because I’m white girl-ing so hard right now and I just can’t even!

I’ve been to see Manchester’s big Christmas pantomime and you know the glee you feel when you see your food coming in a restaurant? Imagine that feeling lasting for two and a half hours. That was me last night. Clawing at my face and wanting to cry with sheer joy. All of that and then multiplied by a million when it started snowing on us indoors!

Jayne Torvill and Christopher Dean are the headline celebrities this year, in their first ever panto appearance, playing the fairy godparents, Queen Juniper and King Crispin – fabulously graceful and, of course, speaking in verse.

They opened the show with a delightful bit of skating, much to the dismay of my seven-year-old cousin, who thought they could’ve have been ‘a bit more exciting’. I, however, thought seeing them do what they do in all of their glory was wonderful!

The silk flying part of their bolero finale was crazy impressive, too, soaring across the stage – even if all I could think about was how they got insurance to sign off on that because they were definitely not clipped onto it. It was brilliant! Dangerous and brilliant!

You know, as I usually do, I’m going to run through the cast first because they’re what I always get attached to most. I’ll start with the panto’s namesake, Cinderella, played by Eloise Davies. For a show that’s named after her, she wasn’t actually in it that much, and when she was, it was kinda flat.

I don’t think it was her fault though. She didn’t seem to be written into her own story very much. I still loved her anyway, though, and out of nowhere she gave us a cheeky cover of ‘Love You I Do’ from Dreamgirls, which was amazing – YES PLEASE!

RELATED ARTICLE  Famous shoes and who wore them

The quick change from her signature rags to magical ballgown was incredible too! My other cousin, Abby, was flabbergasted and if I didn’t know how it was done I would have been too. Her transition twirl was flawless. Of course, she also got locked in a wardrobe – silly Cinders! To be fair, though, her ugly step-sisters told her there was food in there, so I’d have ended up locked in it just as easily.

Speaking of those step-sisters, Tim Hudson and Dave Lynn filled the heinously wicked boots of Cinderella’s spoilt and selfish step-siblings, Cheryl and Rita. From their Cruella-esque entrance dresses to their Christmas tree and snowman-themed ballgowns, they were brilliant, and deliciously evil! Perfect villains for the show!

I hated them both instantly but I wanted more of them! Such monsters! Threatening, for instance, to hurt Baron Eccles, Cinders’ father (played adorably by assistant director Anthony Houghton), if she didn’t rip up her invitation to the Prince’s ball. That was heart-breaking to watch. When it came down to business and getting what they wanted, they were not playing games – those ugly, ugly step-sisters!

Dave Lynn was also giving me Detox vibes – drag queen on a platter – and I was living for it!

And now I must talk about the heartthrob that was Prince Charming (Liam Doyle). All I can say about him is ‘heart-eyes emoji’. He was so handsome and charismatic. Especially after hitting me right in the feels with a bit of Jason Mraz’s ‘I Won’t Give Up’ – tugging right at my heart strings, chasing Cinderella through the woods whilst she’s chilling in a giant pumpkin and having woodland creatures dance around her in the fog. I don’t even understand what that scene was about but it warranted men with badger and fox heads on, so I’m completely okay with it.

At first I couldn’t put my finger on why I was drawn to Charming, whether it was recognition or my pure thirst, but it hit me when I read in the programme that he was Fiyero in Wicked when I saw it a couple of years ago! He is bae. I would like to have babies with him, please.

Cinders’ best friend and confidant, Buttons, was played by Andre Vincent. I won’t go into a Tumblr-induced rant about him wanting sympathy from the audience and feeling entitled due to being a man because Cinderella doesn’t love him back, because he got over it pretty sharpish, so four for you Buttons. I’ll instead say that he was great. Really great! He was what kept the story going and put those dreadful step-sisters in their places more than once!

At first I wasn’t too keen on him and I don’t know why, but after a few minutes of shouting, ‘Yo there, Buttons!’ every time he came on stage, I was loving him. He was fab! In particular a scene between him, Baron Eccles and Dandini, in which he tries to grasp who lives in the first house, what lives in the second house and I don’t know what lives in the third house – which was funny as hell! (That will make sense if you go see it, which I strongly advise that you do!)

Now I need to talk about Dandini. I’ve been excited to get this out of my system and write it down since I left the theatre. He was amazing, and I say that with flailing hand gestures to emphasise how genuinely I mean it. He was instantly my MVP because of his joke about finding a queen in the Village and he only got better after that!

Samuel Holmes stole the show for me as Prince Charming’s man-servant and escort. I’ve already found him on Twitter and told him that he was fab. He was sassy and witty and genuinely hilarious. I want to be his best friend and/or husband, and for him to love me, because I feel like he’s the type of guy I would have an absolute RIOT with.

And his solo opening in the second act blew my actual mind: Nina Simone’s ‘Feeling Good’. My brain still cannot compute how brilliant it was! I was screaming for more. Samuel made Cinderella for me. It would have been your standard ‘He’s behind you!’ panto without him, but he sparkled and cranked it up to 10 for me. Perfection! He is doing what he was born to do and I applaud him!

Even during the big finale number he was drawing my gaze from the rest of the cast and I loved every second of it. Now I’m a sucker for a bit of Tina, so a massive musical production of ‘River Deep, Mountain High’ I’m all for, but he breathed life into my soul. Am I overdramatic? Yolo.

I also want to talk about the ponies a bit more… Because they’re ponies. They were only on stage for about 30 seconds when that fateful pumpkin was turned into a carriage, and aside from Dandini, it was the best thing I’ve ever seen. Out of nowhere – ponies! On a stage! Ponies! In a theatre! PONIES! They even have their own credit in the cast list!

They belong to Ian Lucken, so whoever you are, Ian, I salute you! Thank you for bringing your ponies along to be in this show! You’re a lad! Actual ponies! It doesn’t even seem like a real word anymore because I’ve said it so much. Ponies.

Okay, cast down! I want to talk about the choreography because it was phenomenal and the cast and chorus executed it perfectly. I’ve just read that Aaron Renfree was the choreographer. Who’da thunk? Aaron Renfree the ex-S Club Junior. The one that’s really hot now. Aaron Renfree that I’ve seen about a thousand times in Oxford Street Primark. What a peach! Aaron, you did good! Really good. Elle Woods snaps for you.

Music next – it was great! The last pantomime I saw was Robin Hood in Greenwich a few years ago and the dame came on to ‘Gangnam Style’ which was hilarious but exhausting because it’s that song. But the panto dames in Cinderella (Cheryl and Rita), entered to the saxophone riff from Fleur East’s ‘Sax’, which was inspired. And the big band production for Dandini’s rendition of ‘Feeling Good’ – hold me! We had the lot: Ed Sheeran, Take That and Walk the Moon’s ‘Shut up and Dance’ too. I was loving it!

I honestly can’t think of a bad thing about Cinderella except that it had to eventually finish. That made me sad. This show is incredible. You have until 3 January to go and see it and know what real happiness is, and if you don’t, then gurrl, you be trippin’!

I’m definitely going to snatch up any child* and take them whether they like it or not so I can see it again! You have no excuse! If you love pantomimes, fabulously camp productions, snow, incredibly fancy costumes, hilarious jokes or actual real life in the flesh ponies, you NEED to see Cinderella this Christmas!

*Please note I’m not down for kidnap. It’ll be a child I know and I will have express permission from their parent or guardian.