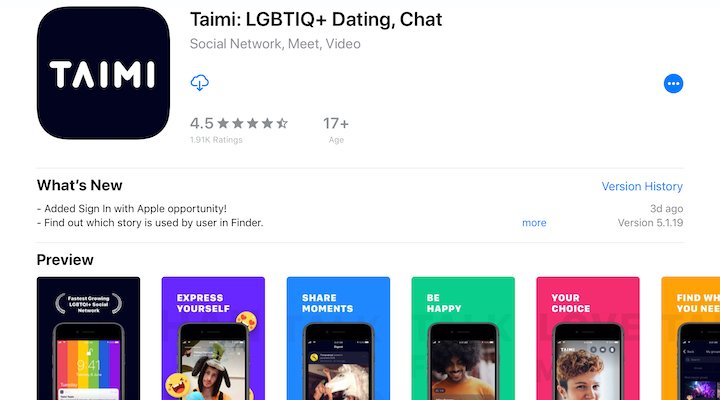 TAIMI is fast becoming known for the being the next LGBT dating app. Have you signed up to it yet? If not here’s what you need to know.

With several layers of verification, TAIMI prides itself on being a secure app, creating a community that has zero-tolerance for judgment, discrimination, hate or aggression. Taimi is a social network that stands for equality, freedom of expression, acceptance and advocacy of LGBT rights over the world, and caters to people looking for meaningful connections, whether this is love, friendship or a simple conversation.

According to the company, they have over 100,000 daily active users from a pool of over 3 million registered users worldwide, including in the US, Canada, U.K., Ireland, Australia, New Zealand, Brazil, France and Germany.

What does TAIMI do?

As with all LGBT dating apps, users create a profile, with as much data as they want to add, such as photos (including a separate private photo album), tribes to be associated with, and what they are looking for (from short to long-term relationships).

Functionality that we recognise from other LGBT dating apps includes:

The ‘Digest’ functionality provides a crossover between LGBT dating app and social media, where users can share stories and look through a feed of others’ stories and interests they follow.

TAIMI is founded in Las Vegas in 2017 by Alex Pasykov, who acknowledges that although TAIMI started out purely as a dating site, and it has “grown to include a massive social networking aspect”. Alex explains that “TAIMI has to be more! We must give everyone regardless of their gender or sexual identity the opportunity to connect and form different relationships. We tremendously value our freedom and want to do everything in our power to eliminate homophobia around the world.”

How much does TAIMI cost?

TAIMI is free to download in the App Store and Google Play and is subscription-based with a one-week free trial in the UK. TAIMI offers lots of rates depending on whether users want to sign up for a week, a month or a year.