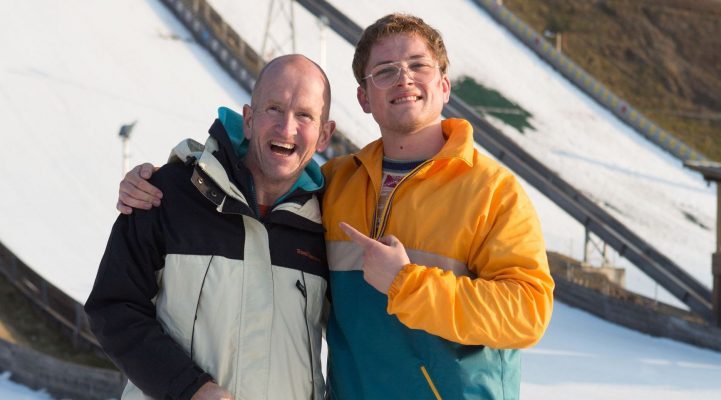 Eddie the Eagle, the inspirational story of Eddie Edwards the unlikely British Olympian, is out to download 1 August and to own on DVD and Blu-ray 8 August. Simon Button chats to him in the run-up to the film release.

Simon: How involved were you in the film?

Eddie: My work was done 17 years ago when I sat down with the scriptwriters. I signed a deal for this film back in 1999 and talked about my life and my skiing, but it just kept stalling and I thought ‘I’ll just get on with the rest of my life and if they ever get round to making it they’ll give me a call’. Then one day last year I was in Sainsbury’s shopping and Matthew [Vaughn] called me. He said ‘This is Matthew Vaughn, do you know who I am?’ and I had to admit ‘Not really!’ He said, ‘I’m a film producer, I’ve just bought the rights to your life to make a movie and we start filming in about three months’ time’. He told me they’d got Hugh Jackman and Taron Egerton and my first reaction was ‘Oh my God!’ I met Taron and Dexter [Fletcher, the director] and told him a few bits and pieces about my journey and it all went from there.

What’s it like seeing Taron Egerton playing the younger you?

He was amazing. They asked me if I’d go to Pinewood a month before they started filming because he wanted to meet me. We had tea and biscuits and he wanted to get an idea of my accent, my mannerisms, that kind of thing. He must also have done a bit of research watching some of the TV shows I did around the time of the Calgary Olympics. Then when I met him again on set it was like looking in the mirror. He looked exactly the way I looked 28 years ago. He had the jaw, the moustache, the glasses, the hair, everything. I thought ‘Oh my God, he’s me!’ Then when I saw the film he made it so easy for me to watch because he played me so well. He had me down to a T or should I say down to an E? He’s done a fantastic job. I couldn’t be more pleased at the way it’s turned out. It’s brilliant.

With the Rio Olympics coming up, will you be watching?

Of course! My attention span is very short so I prefer to watch the Olympics highlights shows rather than all the coverage.

You’ve done reality TV so does an acting career beckon next?

I wouldn’t say no!!  I’ve done lots of television but mainly it’s been things like Winter Wipeout, Let’s Dance For Sports Relief, Splash and things like that, but I’d love to have a go at drama stuff. I do a lot of after-dinner speaking and motivational talks and we’re also looking at doing a theatre tour about my life  – That’s on the cards for later this year or early next year. Whatever opportunities come my way I grab them and if that involves doing a bit of acting here and there I’d jump at the chance. I might surprise myself by discovering other things I might be good at. You never know until you try and I’m open to any kind of opportunities whatever they may be.

Do you have a favourite scene in the movie?

I love the whole film really but there are certain bits that take me back so vividly to that time in my life, like when my mum comes over to me and gives me the tin to put my medals in. They’ve really caught the heart and the essence of my story.