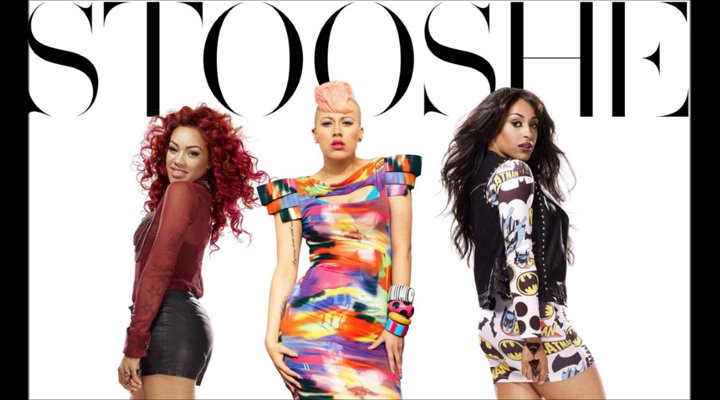 Barney: How are you all?

Barney: So I just want to start by saying I just love that I’ve seen loads of photos of you recently where you’re all wearing combos that sort of match each other.

Barney: You notice it in fashion, that people wear like two shirts that match their shorts, but you kinda do it as a three. I just love it so much

Barney: So if you were a designer label, what would you say you were as Stooshe? And we’ll do a high street version as well because you know you’ve got to have an affordable line for people like me!

Alex: Oh I don’t know, like Topshop and Versace maybe.

Barney: Also, I wanted to talk about ‘Love Me’. I have to say I thought it was amazing to hear a girl group actually talking about female sexual pleasure.

Stooshe (all): laughter from the girls

Barney: I thought that was cool because it was empowering. I’ve never heard a girl group like you that’s so forthright before. Is the new album gonna be that same kind of empowering vibe?

Alex: It’s definitely gonna be empowering but in a different way, not so crude.

Alex: And in your face.

Alex: Obviously, we are three girls who’ve gone through a lot in our journey together and in getting here, so we just want to tell our story with the album.

Barney: I didn’t think ‘Love Me’ was crude; I thought it was cool. You’ve got this real, natural kind of sense about you girls. So when you’re in a picture, it’s not just airbrushed to hell. It’s kind of you girls together and you get on and it’s fun. So, I’ve read that there’s a Motown, lightning-strike kind of vibe within the album. Would you say it’s a spontaneous-feeling album?

Courtney: Not really. Like Alex said, it’s a journey of what we’ve been through and this is a lot more grown up. Like where we’ve grown up from ‘Love Me’. It’s not like that; it’s more hard hitting sounds, live music.

Karis: We love Destiny’s Child. We’re influenced by them heavily, and this is kind of the evolution of Stooshe. So, it’s still got the pop and R&B, but I think it’s just a bit more edgy now. It’s got the funk and soulful element so that’s what brings in the Motown – it’s more in the vocals rather than the music.

Barney: As an audience member, you see like the pop-art vibe and I feel like when you started it was all very comic inspired. But, now I feel like you’ve finessed and it’s kind of like high art, if you know what I mean?

Barney: That works because it feels like the most expensive and the most real feeling when you are yourselves.

Alex: Yeah, it’s been a long journey – especially in the last couple of years – but we’ve managed to find an amazing team now and we’re very happy.

Karis: We’re trying – music is always the main thing for us.

Barney: I’ll also ask, you were nominated as the sound of 2012 and you’re also BRIT nominated, so what’s the dream with this next album? Where do you want it to go?

Barney: One more thing about the fashion aesthetic. How much do you have input into that? Do you meet people and you’re a team, or do you put your foot down and say, ‘I’m definitely wearing this,’ ‘I’m definitely doing this!’?

Courtney: We work with a team. We’ve got a wicked stylist now and he kind of works with us, making what we want to wear happen and making sure it all correlates.

Karis: As long as all of us are happy, that’s the main thing. If one of us wasn’t happy, we’d be able to say.

Alex: But, we have been there, not being happy. Obviously, the first couple of years of our life was heavily styled and somebody’s brand put onto us, and then we went totally ourselves when we split with whoever and now we’ve found the balance again.

Barney: The energy feels so real and nice, so it’s been lovely to meet you.

Stooshe (all): Lovely to meet you, thank you

Stooshe’s much anticipated second album is set for release this year.