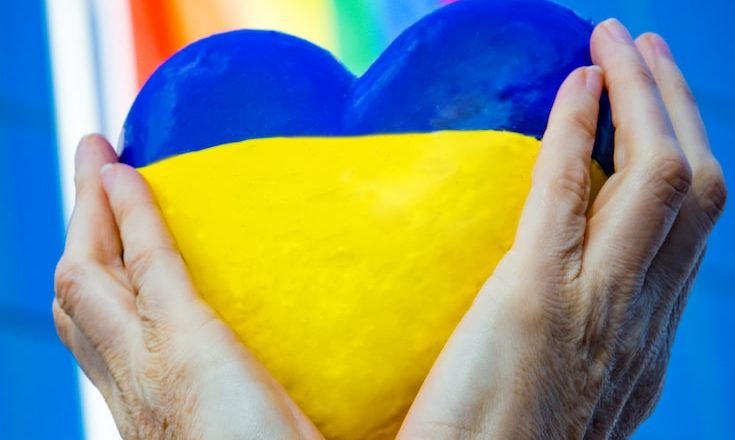 As Russian forces invade Ukraine, Vada Magazine looks at how human rights organisations in the region are working to support LGBTQ+ refugees fleeing the war.

Thousands of LGBTQ+ people are expected to cross Ukraine’s borders to escape the relentless attacks that are being inflicted on their country. On the ground, human rights activists grow evermore fearful of what this conflict could mean for queer people.

The United Nations says that over one million people have fled from Ukraine into neighbouring European countries, following the invasion by Russian forces on February 24th. The number of people forced to abandon their homes, livelihoods and the safety of their daily lives continues to grow by the day.

According to estimates by the human rights organisation, Forbidden Colours, as many as 100,000 LGBTQ+ Ukrainians are expected to arrive in Europe across the coming days, weeks and months. The organisation says it is joining forces with agencies in Poland, Hungary and Romania to support them to welcome LGBTQ+ refugees from Ukraine.

There are concerns about the safety of displaced queer Ukrainians, explains Olena Shevchenko, human rights defender and Executive Director at Insight, an LGBTQ+ organisation in Ukraine.

“We need help right now to relocate LGBT+ people to safer places, provide them with shelter, food and meet their most basic needs,” says Shevchenko, whose organisation is being overwhelmed by hundreds of messages and calls from terrified LGBTQ+ people. “We can’t possibly deal with this tragedy on our own.”

Ukraine’s neighbouring countries have seen a resurgence in homophobia and transphobia. Poland made headlines across the world for its “LGBT-free zones” just a few years ago. The homophobic policy spread like wildfire across the country, before regions began to backtrack, amid the threat of loosing European Union funding.

Across the border in Hungary, another country where Ukrainians are seeking refuge, the government’s position towards LGBTQ+ people remains hostile. From ending the legal recognition of transgender and intersex people, to introducing laws to ban the dissemination of content deemed to “promote” homosexuality in schools.

Given the anti-LGBTQ+ politics that continue to grip this region of Europe, human rights activists are worried about the challenges queer Ukrainians will face once they cross their country’s borders.

For those who stay in Ukraine, the situation is bleak. In the country’s capital, Kyiv, Lenny Emson describes having to continue his work as an activist against a backdrop of destruction.

“Since Russia attacked my country, we are living a nightmare, constantly surrounded by the sound of sirens and mortar fire,” says Emson, Executive Director of KyivPride. He too shares that his organisation are struggling to cope with the growing threat the Russian invasion is already looming over his country’s queer people.

“We are trying to organise and help our community as quickly as possible,” he explains. “But we need urgent help to provide emergency resources, evacuation logistics, and community support during this tragic war.”

The global LGBTQ+ human rights organisation, All Out, known for working in partnership with local activists across the world, is extending its support to groups working on the ground to help those escaping the war.

Working with organisations in Ukraine, Romania, Slovakia, Moldova, and Poland, All Out is hoping to raise funds to support in the evacuation of queer refugees, and finding places of safety for them.

Speaking of the campaign, All Out’s Executive Director, Matt Beard says, “All Out stands in solidarity with the people of Ukraine. This campaign is helping to power the resistance and safety of LGBT+ Ukrainians and to provide urgent financial support where it is needed on the ground.”

As the days pass, staying in Ukraine becomes increasingly dangerous. Putting the physical destruction of war aside, fear fuelled by the prospect of Putin’s tightening grip over the country and Eastern Europe is palpable. The Russian president’s track record on human rights paints a dangerous picture for minority groups in the region.

What’s more, media reports of so-called “kill lists” including the names of LGBTQ+ right activists, are only adding to the apprehension of what a Russian occupation could mean for those who campaign for equality.

Despite this, the war has not taken away Shevchenko’s sense of vocation, “As I come to terms with the violent invasion of my beautiful country, I also know that I want to stay and keep working for my community.”