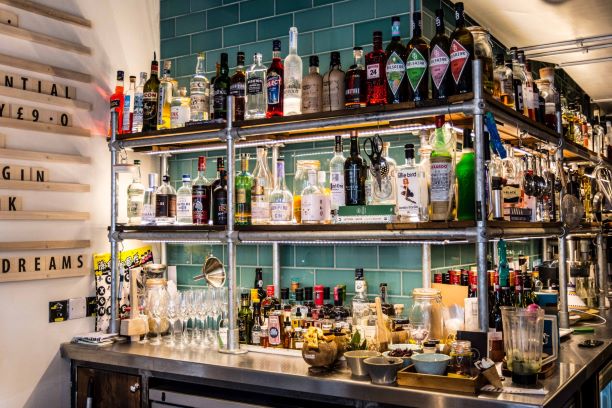 We started with a couple of those crazy cocktails. The ‘Funky Funky Crew’ was smoky with mezcal and has a good tequila kick whilst papaya added sweetness and the whole thing was finished with a padron pepper. The ‘Smoke Signal’ arrives in a bell jar filled with smoke for added drama. Based on BBQ-infused Evan Williams Bourbon and Spit-Roasted Pineapple Gin (from That Boutiqu-y Gin), it smelt like a bonfire but tasted like a Whiskey Sour.

To eat we tried a dip and three of the ‘social eating’ sharers, followed by a main course each. The sharing platters actually outshone the more substantial tagines and kebabs so you may well want to stick with these. The beetroot, tahini and black garlic dip is worth trying; a beautiful colour, it was earthy and hot with garlic, and finished with popped grains. The seared, shelled prawns with garlic and chilli was a flirty little number – it comes in a delicious buttery, lemon-laced sauce and is seriously undersold by the description on the menu. If the prawns were flirty, and then the confit duck pastille was downright slutty. It’s more like a spring roll than a traditional pastille and comes with tzatziki for dunking. Delicious!

The stuffed mackerel caught my eye on the menu (more enticing than the ubiquitous squid) and I’m glad I gave it a whirl. It was a fierce choice; meaty and rich rather than the ‘virtuous’ dish you might expect, it was a like a taste of the South of France and boasted a fantastic roasted red pepper and tomato ‘salsa’.

For ‘mains’ we opted for the lamb and the monkfish. The lamb was a slow-cooked shank served with candied almonds and apricots. It was heavy on the cinnamon and light on the saffron, and despite being tasty it didn’t quite melt off the bone as it should. The monkfish was more successful but needed more fennel and less harissa for my taste. Accompanying carrot, cauliflower and squash were superb. The monkfish also came with a sumac, red onion and coriander salad which was strewn with pomegranate seeds and had extra harissa hummus and excellent pickles on the side. We also tried the halloumi quinoa fries (excellent but not salty enough for me) and a tabbouleh helped to soak up the delicious sauce of the lamb tagine. Also on the menu (I didn’t feel the need to sample) are Birds Eye potato ‘Alphabites’; a pun too far?

We weren’t very inspired by the dessert list – something about the small and unambitious selection told us that they wouldn’t be this place’s strong point. Instead we headed back to the cocktail menu; the Mint Choc Chip Mojito offered an explosion of lime and the Oreo Iced Coffee was like a hard, cold-brew coffee and less creamy than expected. Both were fun but I couldn’t imaging drinking either before dinner. Kids these days, eh?

If you’re looking to eat, skip straight through the dark and bustling bar and into the ‘back room’. It’s a shame that from the street you wouldn’t guess that this place has such a stylish and atmospheric dining area at the rear. Exposed brick and reclaimed wood cladding make for a contemporary ‘rustic meets industrial’ vibe in the exposed beam dining room, whilst retro leather banquettes and a turquoise, tiled ‘nook’ are stylish touches. The lighting is just right courtesy of lots and lots (and lots) of exposed filament bulbs – and to be applauded when so few restaurants successfully negotiate that tricky middle ground between operating theatre and night club. We were still discussing whether the greenery tumbling from the rafters was real or artificial when we left.

It’s a mixed crowd and was bustling even during the soft opening on a weeknight when we visited. Those in the know at the nearby Business Design Centre (it is literally right next door at the old Cabana site) are sure to make use of it for entertaining or post-exhibition boozing and grazing.

For dinner and drinks expect to pay around £50 to £60 per person (based on a dip, three sharing platters, two main courses, two sides, two cocktails and a bottle of wine). However, with so many great social plates to try and *that* cocktail list you could scrimp or splurge depending on your mood and budget!

Killer cocktails – and some seriously good small plates – are sure to make this Islington reinvention of a Soho stalwart a success.