Daniel John Lynch
I’m a fat man trapped inside a skinny man’s body. After many years of working in the hospitality industry and travelling around the world, I’ve finally decided to do something with my worldly knowledge and write. I’m also a documentary film maker and lover of food and all things London. Follow me on Twitter @danieljohnlynch

Being a restaurant reviewer, it comes as no surprise that I love food. Be it Italian, Vietnamese, Indian or Turkish, I love the lot. But the food I love the most is British.

My dad, just like everyone else’s mothers (and sometimes fathers), was the best cook in the world. He could cook roast potatoes like no one else. He could marinate and fry steaks to perfection. His casseroles were winter in a pot and he could bake the most indulgent of cakes. Ok, the last one is a lie, but our bakers down the road were amazing. Hearty home cooked British food is by far the best. But what happens when you leave home? Who’s going to make those dishes now?

Most of us are too busy to cook and it can also be pretty expensive, especially if it’s just for one. Sure, you can get those cheap and nasty “classic” microwave meals from a supermarket, but it’s just not the same. But fear not my culinary companions. Because there is beacon of hope. Our cry has been heard and our prayers answered. I have one word for you. Canteen.

This week, I decided to take my friend Dani St James out for a belated drink and meal in central London. Dani is the General Manager for The Shadow Lounge, quite possibly the best gay club in London. Currently, The Shadow Lounge is going through an amazing transformation. Dubbed #SohosBiggestSecret, it really is. I took Dani for a glass of Champagne at Kettners to see if I could get any information out of her about the new style and layout of the club. Her lips were sealed. I’m as oblivious to the new look as everyone else.

We arrived in Kettners and headed for the bar. After a few minutes, the barman offered us to take a seat and a waiter would come over and take our order. After five minutes no one had come over to us. It was a Monday night, so it wasn’t particularly busy. I asked the waiter if he could take a drinks order as we’d been waiting a while, and what I got back in return was a bit of back chat and he blamed the wait on me for sitting in the corner. Charming. A few minutes later, the bartender came over himself and took the order. Our drinks arrived and I asked for the bill straight away. When you go somewhere that charges £28.10 for 2 glasses of Champagne (inc. service), you would expect some stunning service. Alas, this was not the case. It’s easy to see why this legendary London restaurant has seen its name decline in the industry.

Dani and I then strolled through London towards the Southbank Centre. We hunted around for Canteen, but were stumped as it was nowhere in sight. Eventually, I asked someone who pointed to the back of the Royal Festival Hall. Tucked away on the other side of the building, away from the river, there it was. Canteen. With a large outside dining area and huge windows as walls, the restaurant looked warm and inviting. We walked in and were pleasantly greeted by a young lady who took us to our table straight away. We sat in a booth which was quite possibly the best thing I’ve sat on in a very long time. Dani and I were quite impressed with the level of comfort. Is that weird? When we had finally got that out of our system, our waitress appeared.

Our waitress was called Claire, who was from Melbourne in Australia. This young lady was charming, polite, funny and knowledgeable. She was basically everything a waitress should be. Throughout the whole night, she made sure we were looked after and that we were enjoy our evening. Finding a server like that in London is a rare breed.

After some consideration, we decided that we’d skip the starters this time, as we had both already seen what we wanted for dessert. Dani went for good old Bangers and Mash with a side of broccoli, and I went for the Beef and Tomato Pie with Mash and Spring Greens. The sausage was this epic Cumberland sausage ring that sat on a pile of creamy mashed potatoes. If that doesn’t scream out British, I don’t know what does. The sausage was cooked perfectly and was of a high quality, not over-cooked or rubbery, nor was it dripping grease and oil. The herbs a spice balanced well with the pork and the mash was insanely smooth. The broccoli was also cooked the way it should be. In other words, it wasn’t boiled within an inch of its life and all wet and soggy. It was charred, which gave it a nice bite and crunch to it. 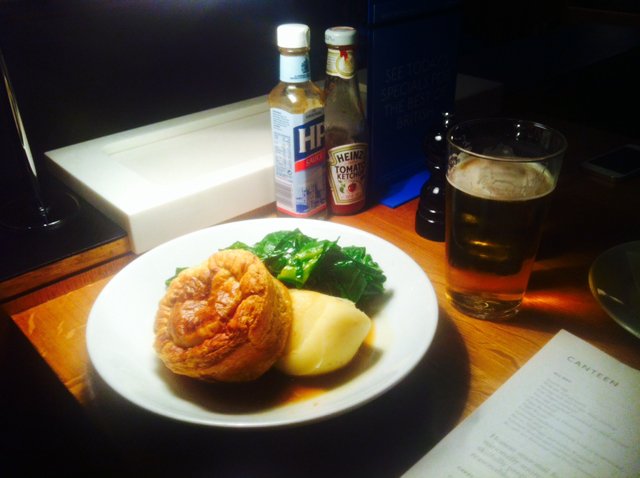 My pie was something truly wonderful too. After my epic pie challenge for British Pie Week, I now class myself as somewhat of an expert. The pastry was this delightfully buttery short crust case, with a gorgeous golden glow to it. Inside was even better! Packed with great big chunks of succulent and tender beef with a rich tomato sauce, this pie was just AH-MAY-ZING! Again, the mash was brilliant and the spring greens were beautifully cooked and seasoned well.

Then it came to desserts. There were some great choices, but we had already decided as soon as we had walked in what it is we wanted. Dani went for the Gingerbread with Caramel and Vanilla Ice Cream. This was out of this world. The gingerbread is a dense slice quite similar to a brownie. It wasn’t a sponge, nor a biscuit. But it was insanely delicious. Served hot, the indulgent caramel sauce and vanilla ice cream just melted over the top to create this concoction of genius on a plate. I had the Marmalade Bread and Butter Pudding with Clotted Cream Ice Cream. Now, excuse my French, but…Mon dieu c’est incroyable! This dessert had the right balance of bitterness from the marmalade and sweetness from the caramelised top. Again, this was served hot, with the ice cream left to melt over it. What was also great about my dessert, is that it wasn’t stodgy and over filling. 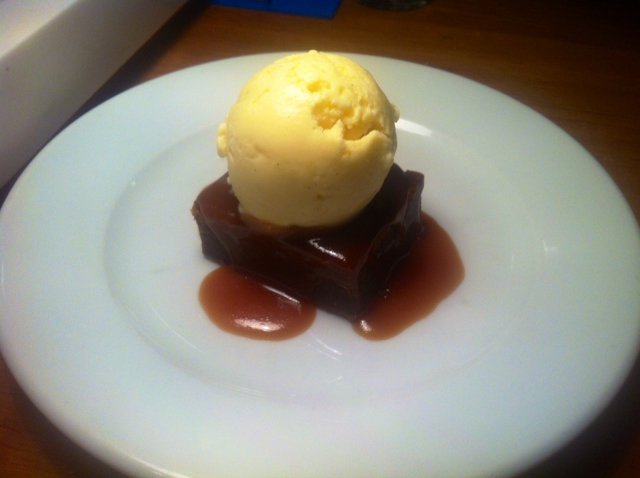 The service at Canteen was exceptional. It’s not fine dining, but that’s not what Canteen is about. The service is fun, friendly and personable, which for me is the best kind you can get. The food? Well, it’s really good. Again, it’s not fine dining standards, but what it is, is honest, Great British Food, minus all pretentiousness. I love fine dining, I really do. But nothing beats the comfort of eating a nostalgic meal in what seemed like to me, a friend’s living room. I felt comfortable and at home. I felt like I did when I was 14 and had my dad cooking for me again. And for a restaurant to stir up those kind of emotions, well, it’s definitely not a bad thing.

I’m a fat man trapped inside a skinny man’s body. After many years of working in the hospitality industry and travelling around the world, I’ve finally decided to do something with my worldly knowledge and write. I’m also a documentary film maker and lover of food and all things London. Follow me on Twitter @danieljohnlynch