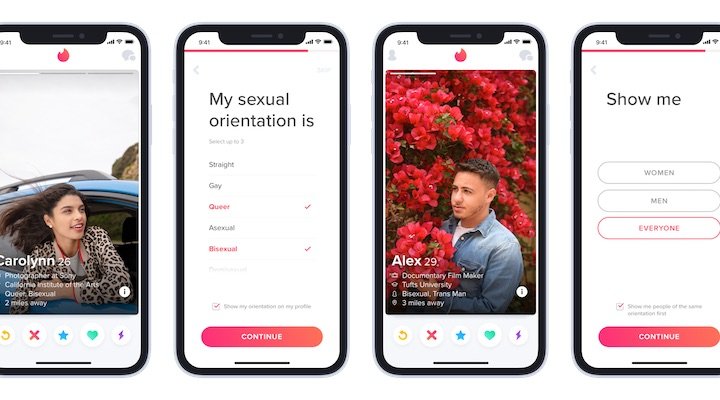 Many of us are familiar with online dating apps, with Hinge and Tinder being two of the most popular as we approach the end of the decade. Both companies have recently commissioned studies to understand the trends of their LGBT users, the results of which we’ve brought together below.

Looking further at Generation Z, Tinder also found that they are more open to dating different genders, 35% of 18-25 year-olds in fact. Tinder’s study went further, uncovering that being online is where Generation Z find they can be their truest and authentic selves – nearly half (48%) of Generation Z said that authenticity is one of the most important elements when it comes to dating, and 71% of their 18-25 year-old users turn to the dating app for self-discovery.

Hinge Labs s a new female-led research team working to provide evidence-based dating insights to help users find love by looking at how successful daters are using the app. Based on the total percentage of users who self-identify as LGBT, Hinge Labs found that the top 5 cities of queer Hinge users are London, Manchester, Birmingham, Bristol and Belfast.

The Hinge Labs team found that lesbians have a higher (matching) success rate, with users succeeding almost half the time on their app, typically chatting for 5 days before meeting for a date in real life.

Tinder’s Orientations feature allows members to identify with up to three of nine orientations (straight, gay, lesbian, bisexual, asexual, demisexual, pansexual, queer and questioning), which is used by over half their user base. From this orientation information, Tinder found that one in five matches of all matches on their app is queer. Tinder is also planning to roll out more gender options globally later this year, its More Genders feature will allow users to identify from more than 30 genders.