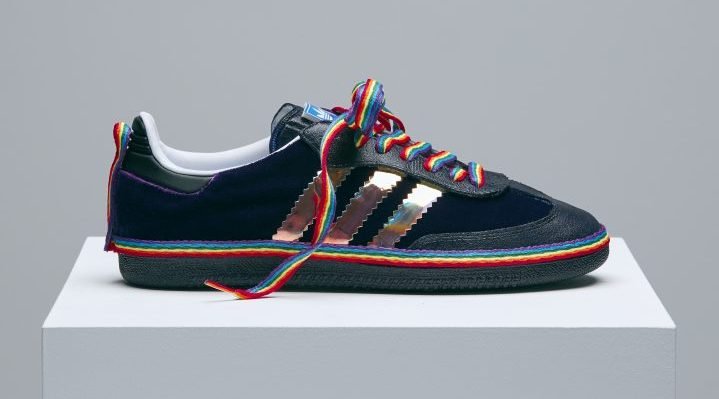 Adidas first released the Samba shoe in 1950 to allow footballers to train on icy surfaces. The shoe’s popularity has perpetuated through the generations. It has been visualised as a football boot, a fashion choice for leading musicians, and the discreet option for Hollywood actors.

Now, the shoe’s biggest fans have designed their own. With the annual pride celebrations approaching, celebrities from across the globe have had their own unique take on designing a shoe that has embraced yet another chapter in its glorious history.

The original and bestselling Samba shoe consisted of a black base colour with the Adidas signature ‘Three Stripes’ instilled on the side, in white. Given the campaign, one can expect the next take on the Samba to be a little more of a colourful affair.

The ‘Prouder’ campaign is inspired by unity, originality, and pride, and has garnered the contributions of some of the biggest celebrity supporters of the LGBT community. Included in this are David Beckham, Elton John, Kate Moss, Pharrell Williams and Sir Ian McKellan. Their designs will be visualised by SHOWstudio photographer and owner Nick Knight, who has previously created exhibitions for Vogue and Alexander McQueen.

Each individual will contribute a statement on the inspiration for their Prouder designs to accompany the shoes when they go on display at the HENI gallery in Soho between 4-7 July 2018. After the exhibition, each pair of shoes will be sold at auction. All proceeds raised will go to the Albert Kennedy Trust, which aids in the rehabilitation of homeless LGBT youth.

The crux of the Adidas Prouder campaign will see the German sports manufacturer participate in its first Pride parade. A float donning the LGBT-themed work will be the very first for Adidas, accompanied by a live Samba band.

Each of the specially designed Samba trainers will be auctioned on ebay to raise funds for the Albert Kennedy Trust.

View all posts by Alex Vergette →