What do steak, feathers, latex and vomit all have in common?  No, they’re not all things on my shopping list! They are all materials out of which the queen of controversy, Lady Gaga, has made outfits. If you’re any kind of homo, or even just any kind of pop lover, you’ll already be well versed in some of her more famous looks (the meat dress springs instantly to mind). But most of these iconic outfits that made her famous were from, what many would call her ‘heyday’ way back before the turn of the teenies or whatever you want to call them.

With lots of detractors saying she is on a downwards slope and citing her relatively meagre ARTPOP sales figures, compared to the phenomenal success of Born This Way and The Fame, I want to take a closer look at Lady G’s recent fashion decisions and question whether her status as a style icon is still deserved or  whether she has really become as predictable as her nay-sayers would have us believe. The first time most of us got a decent listen of the upcoming ARTPOP album was when Gaga performed at the iTunes festival back in 2013, and after the all-black ninja ensemble she sported for her first performance of Aura, out she popped in a predictably risky two piece shell bikini. What she gave us, however, was a million miles away from the clichéd sex-bomb image of Rihanna or the nausea-inducing twerking of Miley. Her pert arse made even me green with jealousy and her hair was worthy of a L’Oréal advert. She kicked off her promo tour with a winning look. 1-0 haters. Things continued on a high when she left the show in a dress that reminded the world just how technologically forward-thinking the Haus of Gaga can be. The dress in itself was sculptural and artistic, but the fact that it blew bubbles took it to another level of awesome. Even the small things like the relatively demure hair and makeup added up to one genuinely  cool look for LG. Then Gaga hit a bit of a stumbling block while she promoted the fourth track from her album, Dope. As seen on the cover-art, she attended the Youtube Music Awards with a terrifying set of teeth on  display. That smile is the stuff of nightmares on its own, but the combination of the hat, glasses, leather shirt worn as a dress and gargantuan black boots made this entire look waaaaaaay over the top. Individually, the pieces could have looked really cool, especially if the shirt was worn with perhaps tartan trousers, but putting them all together gave Gaga’s critics justifiable ammunition for attack. 1-1. 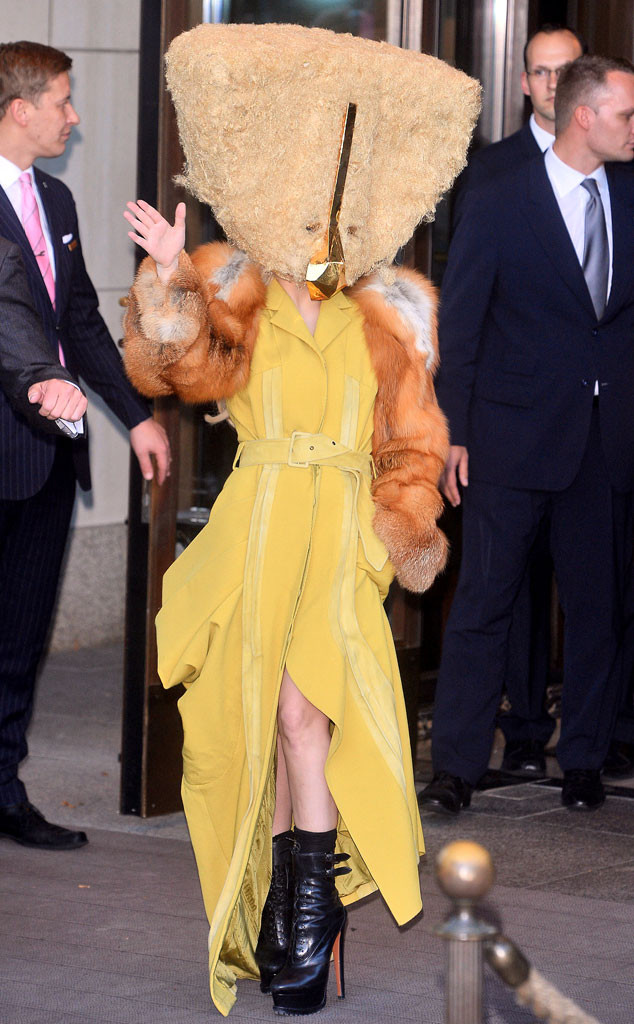 She didn’t have any more luck with the outfit she wore in Berlin in October of 2013. The dress itself wasn’t too bad, the fox-fur sleeves were possibly slightly questionable, but on the whole it was acceptable. The problem was the giant fur handbag she’s stuck her head into. It even had a beak! There’s experimental fashion choices, and then there’s dressing up as animals as though it’s halloween. 2-1 to the haters. If Gaga can do anything,  however, it’s reinvent herself. She was spotted  in London wearing a beautifully cut black Atelier Versace suit. Exposing a peak of sexy lingerie, she sizzled and smoked like a chimney as she walked out of her hotel, and the iridescent glasses gave a pop of colour to the whole ensemble. Top marks Gaga. 2-2.

Lady G topped off her fashion year by attending the Oscars in Atelier Versace, and although I wasn’t crazy about the hair, the toned down make-up complemented her dress perfectly and she showed off her womanly figure to perfection. I don’t know about you, but if my little girl was going to look-up to a celebrity and copy her appearance, I’d much rather she tried to emulate Gaga’s curves with a bit of the bonkers on the side rather than Kim Kardashian’s arseageddon. Gaga is definitely at her best when she tones it down.

She’s done the wild and the wacky, and now she’s transitioning into a genuinely fashionable person, who repeatedly steps out in high-fashion looks and kills it along the way. She’s not perfect, but who is? I know I’ve certainly made fashion choices that I’ve looked back on and cringed so hard I’ve curled into a ball and cried. Everyone is allowed to make mistakes, but Gaga’s successes far outweigh her failings.

So Gaga, here’s to you *raises a glass* and here’s to another fabulously fashionable year, keep looking fierce!

Vada is recruiting new fashion writers to join our team! If you’ve got a sharp wit and an eye for style, get in touch, we’d love to hear from you. Email our fashion editor at elliotrose@vadamagzine.com and tell us why you want to join us. Good luck! xo