Aaron Holloway
Aaron Holloway is an Australian photographer based in Bremen, Germany. Aside from eeking out a career in the wilds of Europe, he's an avid tea drinker and occasionally gets to photograph some attractive guys. Follow @adhollowayart or www.facebook.com/A.DavidHollowayArt

On Deansgate, right next door to the John Ryland Library where you can find (until January) an exhibition on the Polari language from which this magazine takes its name, is a strange glass triangle in the middle of a stone forecourt. At first glance you would walk right past it, not giving it a moment’s notice – just another strange public art piece, surely. This one however is not an art piece, but the entrance to the below-ground restaurant Australasia.

As an Australian who hasn’t been home in nearly two years, I was intrigued to try some home-grown Aussie dishes, and to find out just what exactly Australian food was. Contrary to popular belief, we don’t drink Fosters, eat kangaroos, or eat Vegemite by the spoonful. If I were to make a restaurant serving Australian food, it would pretty much consist of meat-pies, sausage rolls and lamb steaks cooked on a barbecue, with pavlova and lamingtons for dessert. Probably it wouldn’t last very long. Unless I added a few items of food from the surrounding countries to fill out the fare. Which is pretty much what’s happened here. Since the Australian side of food is actually pretty light, the Asian element has been added to fill up the menu, and it does a pretty good job.

Once you descend the staircase via the glass triangle, you are greeted by a dimly-lit bar, with a DJ working two massive touch-screen displays providing an interesting dance beat to accompany your meal. To the right of the bar area is the main dining area, with a range of booths and tables, decorated with dried tree branches that certainly go some way to evoke the spirit of the Australian outback. Once seated, we were quickly offered a look and explanation of the drinks menu. 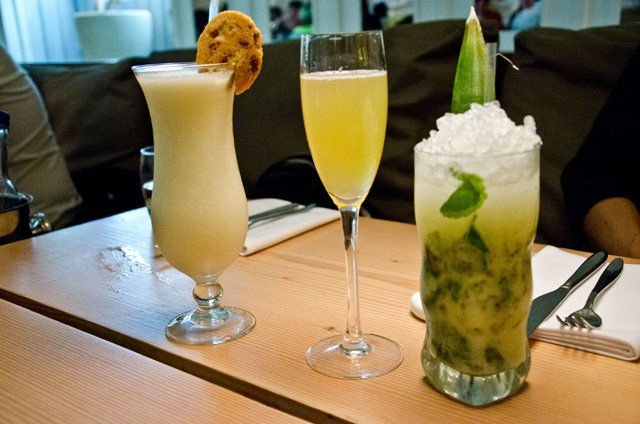 The drinks menu is full and provided on an iPad, with a full description of cocktails with the touch of a button. I tried an Aussie 75 which consisted of Bundaberg rum (brewed in my home state) mixed with sparkling wine. Not something I would ever have thought of doing – Bundy is usually mixed with coke – but it was a very satisfying combination. For those preferring a more refined drink, there is a good selection of  red and white wines, and sparkling wines (listed as ‘champagne’), as well as actual French champagne, and for those with deep pockets, a bottle of Grange Hermitage Australian wine from 1994 for around 500 pounds or a Dom Perignon for about 1200. 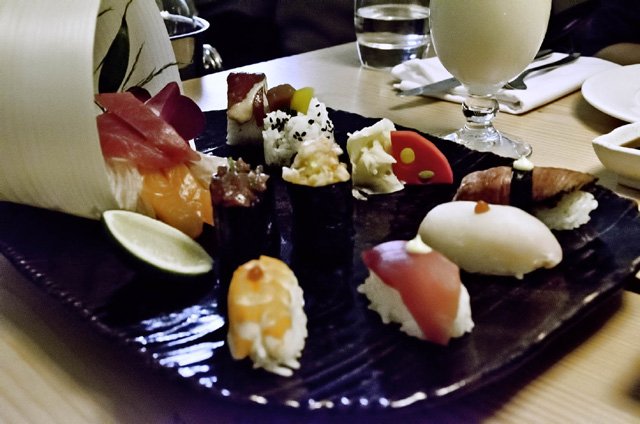 Drinks aside, the food menu is also something to behold. It mostly consists of sushi and other Asian style dishes, with a few Australian twists thrown in, such as Australian fish in the nigiri and sashimi and an Australian Wagyu beef steak. At the suggestion of the waiter, we chose to eat tapas style and ordered three plates each to share around the group. The first to arrive was the sashimi and sushi platters, which were a mix of California rolls including prawns, duck, and vegetables, and sashimi and nigiri with salmon, tuna, and Tasmanian Kingfish. 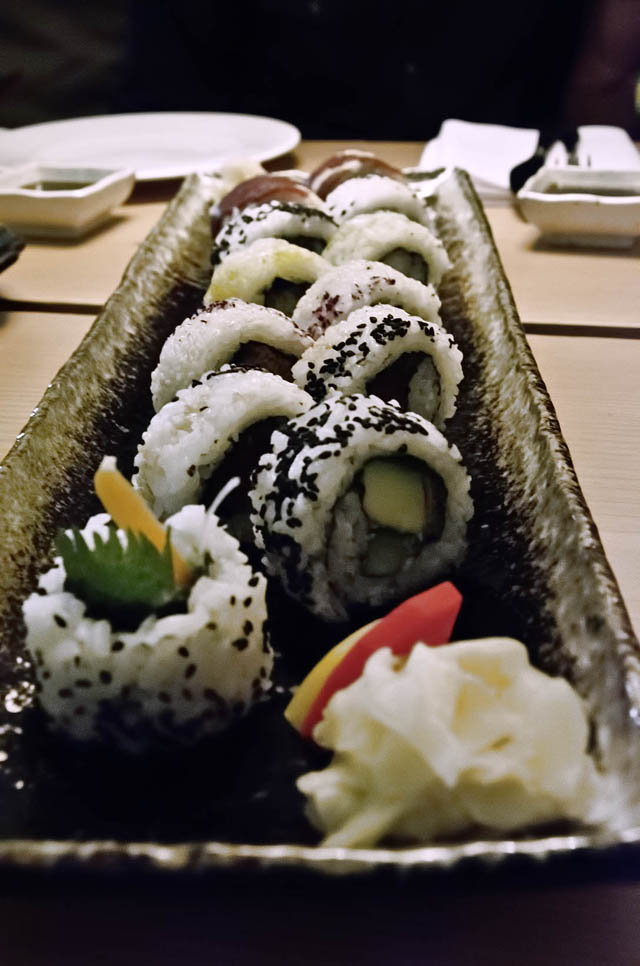 The second wave consisted of the tempura dishes – squid and lime, and prawns and asparagus. These two dishes were cooked to perfection. Crunchy outer shells with firm and juicy items inside. The squid and lime combination was certainly a favourite of mine. Accompanying this was the lamb cutlets, served on a raised stone brazier, a roasted aubergine salad, beetroot salad and hand-cut chips. Lamb cutlets are a favourite of mine, we eat a lot of lamb in Australia (it’s unaustralian not to) and these were perfectly cooked. Firm but juicy and incredibly delicious – I was only upset that there was only 3 (at 13.00 pounds) and I had to share the other two. 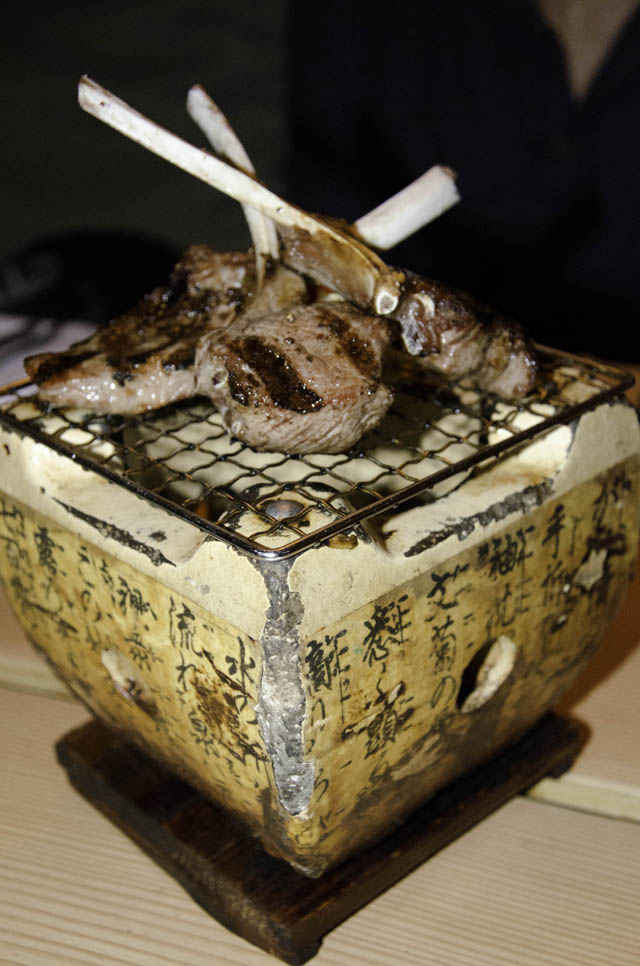 By the time we had made it through everything, I had lost track of what we had ordered, and was silently hoping there wasn’t any more coming as I felt like I was about to burst. The food is certainly plentiful, but it doesn’t come at a discount price, so one is thankful for the serving sizes, although it would be a stretch to say they were generous. Adequate would be a better term. Between the three of us, we ordered 9 items and had 4 cocktails and a bottle of still water.

The staff were attentive and patiently pointed out each individual item on the sushi and sashimi platters, (which we pretty promptly forgot) as they placed the plates on our table. The restaurant is not overly large, but it feels spacious as the low-lighting that is dangling directly above your table creates a sense of separation from your fellow dining parties. I couldn’t say that anything on the menu was particularly Australian, (except for the drinks) however it was a relief not to find kangaroo and emu meat in the selections. The meals on offer certainly slide more into the pacific rim (where, let’s be honest: the food is more interesting) with a distinct Australian twist.

Aaron Holloway is an Australian photographer based in Bremen, Germany. Aside from eeking out a career in the wilds of Europe, he's an avid tea drinker and occasionally gets to photograph some attractive guys. Follow @adhollowayart or www.facebook.com/A.DavidHollowayArt

View all posts by Aaron Holloway →