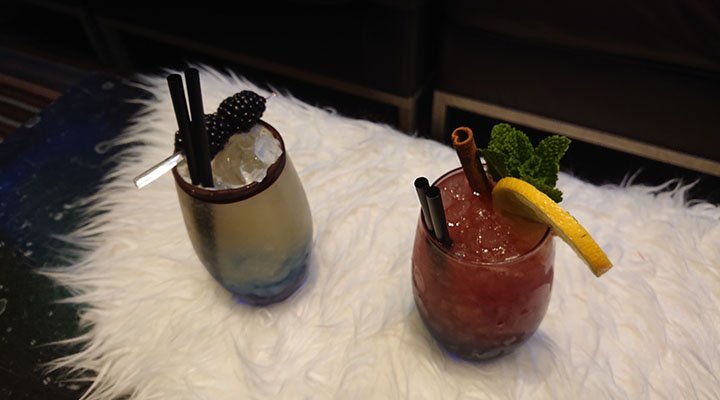 Hilton Manchester Deansgate isn’t content with dressing up its stratospheric bar, Cloud 23. This year, it’s also turned its downstairs space in Podium Bar is into an exciting après ski lounge in partnership with Ciroc Vodka.

Alternatively, the thrillseekers among you can enjoy a ski tray filled with fruity shooters including blackberry, apple, vanilla and red berry to toast the festive season.

There’s also an opportunity for a good photo: you can sit on a fake ski lift and fool your friends! It’s a nice touch at a time when everyone is likely to be taking snaps to capture the memories.

On-screen in the ski lounge, you can catch a number of humorous vintage ski videos, dynamic snow flake projections and bespoke ski trays for your drinks, which round out the ski theme nicely. 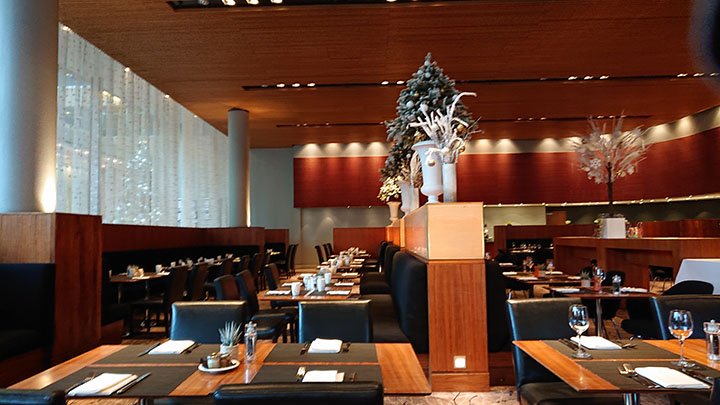 After visiting the Cloud Express at Cloud 23, we came downstairs for a light bite to eat and cocktails. Food can be served in the bar area, if you just want light bits, or in the fabulously Christmas-themed restaurant.

We started off with a cup of mulled cider each. It was toasty warm, lightly spiced, and the perfect antidote to a Manchester winter!

Following this, we tucked into a salad and some halloumi fries to soak up some of the cocktails to come.

The sweet chilli salad with chicken had a delicious satay sauce beneath the top layer of leaves. This was a nice surprise, and gave the dish a subtly spicy flavour. It was also packed with large slices of chicken breast, meaning that it was plenty to be going on with.

Overall, it was a wholesome, fresh delight.

To accompany this delicious Asian salad, we ordered a side of decadent halloumi fries. The texture of these was fabulous, and the crispy fried exterior provided a great counterpoint to the slightly sweet, cheesy inners.

The fries were served with delicious hummus – a fine pairing, and one we’re keen to try at home.

Of the cocktails, we started off with the Berry Christmas with Ciroc Red Berry, rose and prosecco. This was light, floral and cool. It was also quite strong, so if you step outside, have a glass of water first to avoid impromptu skiing down Deansgate!

Next up was the Father Christmas, featuring Ciroc Amaretto, Bulleit Rye and orange. Spiced orange with sweet and sour fragrant notes made this a real jolly treat.

It was refreshing and well balanced.

Next we tried the Very Velvety with vanilla, lemon, apple, pear and cinnamon. It was sweet, fruity and tart, with the cinnamon kick giving it a richness that shined though.

It was also sort of milky, which is the work of the vanilla deceiving your tastebuds, but it gave the drink a lovely, homely creaminess. And yes, that’s a chocolate crust around it’s rim. Prepare to stain your lips!

The Festive Bramble was the last cocktail we tried. It was perhaps a bit tartier than your average bramble, and the cinnamon stick wedged in made it slightly fragrant, but it was a familiar take nonetheless and a very nice way to end the day’s cocktail hijinks.

We always love visiting the Hilton Manchester Deansgate, and the staff were as wonderful as ever.

We were sad to leave the plush fake furs and ski slope trappings of Podium for that biting Mancunian winter, but the bar made it the cold that little bit more hospitable.

RELATED ARTICLE  London - where to drink cocktails in September