‘Of course, in the old days,’ people will tell you, as if they remember them – I mean, as if they were personally hanging around with Christopher Marlowe and Shakespeare and the whole Elizabethan crowd – ‘there were hardly any bridges in London. If you wanted to get across the river you had to go by ferry.’ And this will usually be oohed and aahed about and considered to be terribly exciting and romantic, even though, when you think about it, all it tells you is that bridge design massively improved since Kit and Will’s time because now London is Bridge Central. There’s nothing inherently romantic about crossing the Thames by water just to get somewhere, is there? 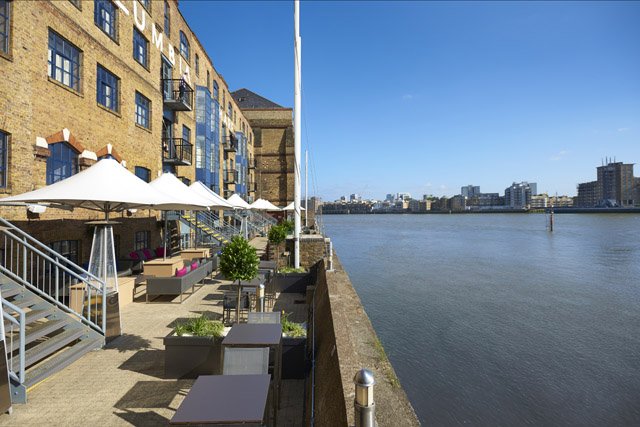 Well, it depends where you’re going. The Woolwich Shuttle or the Putney to Blackfriars line may not exactly be dripping with the glamour of the age of sail, but even a cynic like myself has to admit that getting your own private ferry to a luxury hotel is kind of a special experience, and not the only one the new DoubleTree by Hilton London Docklands Riverside has in store.

Readers familiar with the DoubleTree brand will be aware of the warm cookies they provide travellers on checking in, a gesture which is clearly intended to seduce the visitor. But the Docklands iteration of the franchise makes brilliant use of the river to start the process before you’re even through the door. I mean, you can’t rush up to the front of the Gatwick Shuttle to do a Kate ‘n’ Leo with your companion, can you?

This canny use of the river continues to the hotel itself. Housed in a series of converted wharf buildings, the DoubleTree by Hilton London Docklands Riverside also has its own private dry dock, available for hire for both corporate and private functions – the kind of detail which sounds like it belongs in a Don DeLillo novel. The construction of the buildings also means guests find their way between parts of the hotel using a series of walkways between the docks, which gives the place a fun, slightly nautical feel. Wisely, ICA design’s interiors have avoided going overboard with overt references to this – sculptures in the restaurant suggest figureheads, but in a highly stylised way, and canny use of exposed brick and the like nods to the hotel’s industrial past without, again, belabouring the impression.

Perhaps unconsciously influenced by the maritime setting, my companion and I both ordered the Devon crab on sourdough to start when we arrived in the restaurant. This was gorgeous, the crab cutting through the sourdough like sea air, its saltiness offset by paper-thin slices of aromatic fennel and a hint of chilli.

The confit pork belly which we both plumped for as a main was immaculately presented and gloriously, decadently satisfying, as indeed were the desserts – sticky toffee pudding for him and the cheesecake (which, in a nice touch, was presented on a base made of the same mixture as those devious, delicious cookies) for me. 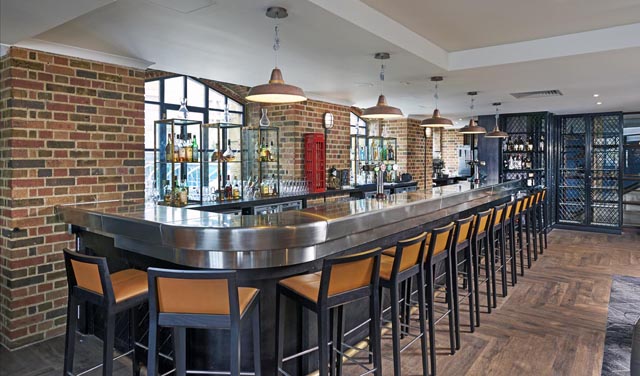 In the interests of fully investigating the hotel’s facilities we also decided to inspect the luxuriously appointed bar, where we found the mojito (him) and cosmo (me) mixed to perfection – so good, indeed, that we felt we had to order another one to see if the bartenders could recreate such perfection twice (reader, they could). 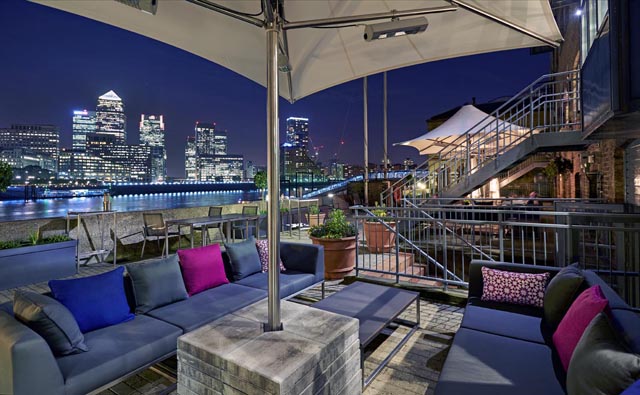 Perhaps wisely, we decided to curtail our investigations at this stage, and enjoy the view of the Canary Wharf skyline from one of the hotel’s two terraces (there’s that smart use of the river again), before heading back to our room.

It won’t, at this point, be a massive surprise if I tell you this was as seductive as the rest of the hotel, but it was. A laptop-sized safe provides security for the business traveller, and there’s a similarly generous flatscreen TV for those wanting audiovisual entertainment, though we preferred spending more time enjoying the river view from our fully-openable, floor-to-ceiling window.

Breakfast was as comprehensive as you’d expect from a hotel of this calibre – both continental and full English options are available, and everything is cooked to perfection (no black pudding fried to charcoal consistency here). The main standout for me was the additional availability of muffins infused and topped with Nutella which, if anything, were even more likely to unhinge my critical faculties than the signature cookies. Whatever you go for from the breakfast bar I’d strongly advise leaving room for one of these babies.

The hotel can be reached by land and, strictly speaking, given that we both had appointments which required travelling via Canada Water tube, both my companion and I should really have headed that way – but we opted to pick up a pass at reception and get the ferry back instead. Turns out crossing the Thames by water is pretty romantic, after all. Or at least it is staying somewhere like this… 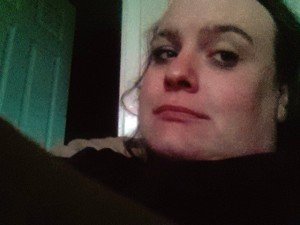 AJ McKenna is a former deputy editor of So So Gay magazine and regularly writes for feminist pop culture blog Clarissa Explains Fuck All. Her one-woman show Howl of the Bantee premiered at the Edinburgh Fringe this summer. This October and November she will be touring the UK with a select group of spoken word artists as part of Public Address: The Soapbox Tour.

View all posts by AJ McKenna →