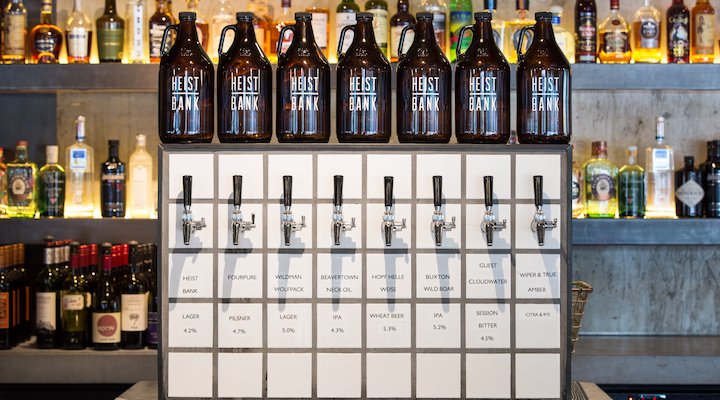 The Heist Bank Beer Festival returns to the Paddington bar, with over 60 beers on tap at any one time and over 80 different beers expected to be served over the festival week. The resident beer geeks at Heist Bank have curated a well-balanced list of their favourite brews across a range of styles to ensure that all thirsts are quenched. Whether drinkers prefer fruity ales, unusual stouts, or bold cask beers, the Heist Bank Beer Festival will have something new for the curious beer-lover to try.

Three well-known breweries Fourpure, Siren and Wild Beer Co. will be taking over the bar’s twelve taps across the weekend and will be launching special seasonal releases and exclusive collaborative brews. The weekend will also include hands-on workshops taking place in the ‘Games Room’ featuring the likes of beer and cheese pairings, beer games, non-alcoholic beer sampling and beer yoga. We’re not convinced a balanced beer will necessarily bring balance to yoga positions, but here’s to trying everything once.

Throughout the weekend, Heist Bank’s pizza oven will be blazing, offering an impressive selection of pizza to soak-up the beers. The pizzas are cooked in the wood-fired oven and have inventive toppings such as wild boar sausage, Bath chaps and yellow courgette.

The weekend will also feature DJs throughout the evening. This year, Heist Bank Beer Festival will be an exploration of new and lesser known beers as well as a chance to get reacquainted with old favourites.

Tickets are priced at £15 and include a festival beer glass and two beers from the day headliner (Fourpure on 12th, Wild Beer Co on 13th, and Siren on 14th).

For more information about the venue visit heistbank.com, and specifically for the beer festival information heistbankbeerfestival.com.

Following the latest information @HeistBank or searching the hashtag #heistbankbeerfest