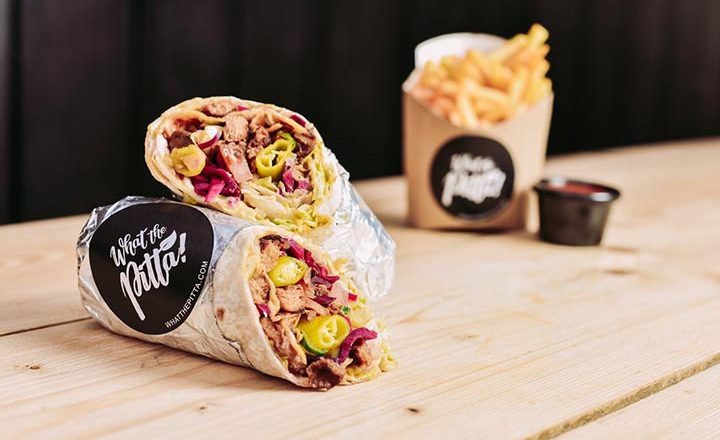 After opening three popular locations in just two years in London, What the Pitta are set to open a new vegan kebab outlet in Brighton. Opening on the popular East Street in late 2018, the franchise sets to grow from strength to strength.

What the Pitta is a firm fave among vegan Londoners – but meat-eaters love it too! WTP is famed for its non-GMO soya pieces, secret spices, and guilt-free takeaways. Artisanal bread is made fresh onsite and then filled with homemade hummus, tzatziki, salad and chilli sauce. The Vegan Donner Kebab costs £7.95, and the menu includes a variety of other affordable meals, including Turkish pizza (Lamacun), Doner Chop Box, a couscous salad box and baklava. The Camden branch recently launched a much-loved Vegan Donner Pitta which is already proving to be a huge hit!

What The Pitta was founded by British-Turkish friends Cem Yildiz and Rojdan Gul, after the former admitted he missed traditional Turkish foods after turning vegan. Roj’s uncle just so happened to have been perfecting his own cult vegan kebabs in Germany, so the two made an educational trip to the mainland and What the Pitta was was the result. They opened their first shop in August 2016 at The Pump, Shoreditch. The Croydon branch followed in Summer 2017, with the Camden brand arriving earlier this year.

Co-Founder Cem Yildiz says, ‘It’s incredible that in just two years we have grown so quickly with the support of our loyal customers, and will now be opening our fourth location. What started as a little wooden stall in Shoreditch is now a well-known name amongst the vegan community, especially in London. We can’t wait to take our kebabs further afield with our Brighton opening. We hope to continue encouraging people across the South-East to be meat free more often by providing delicious and satisfying alternatives, with added health and environmental benefits.’