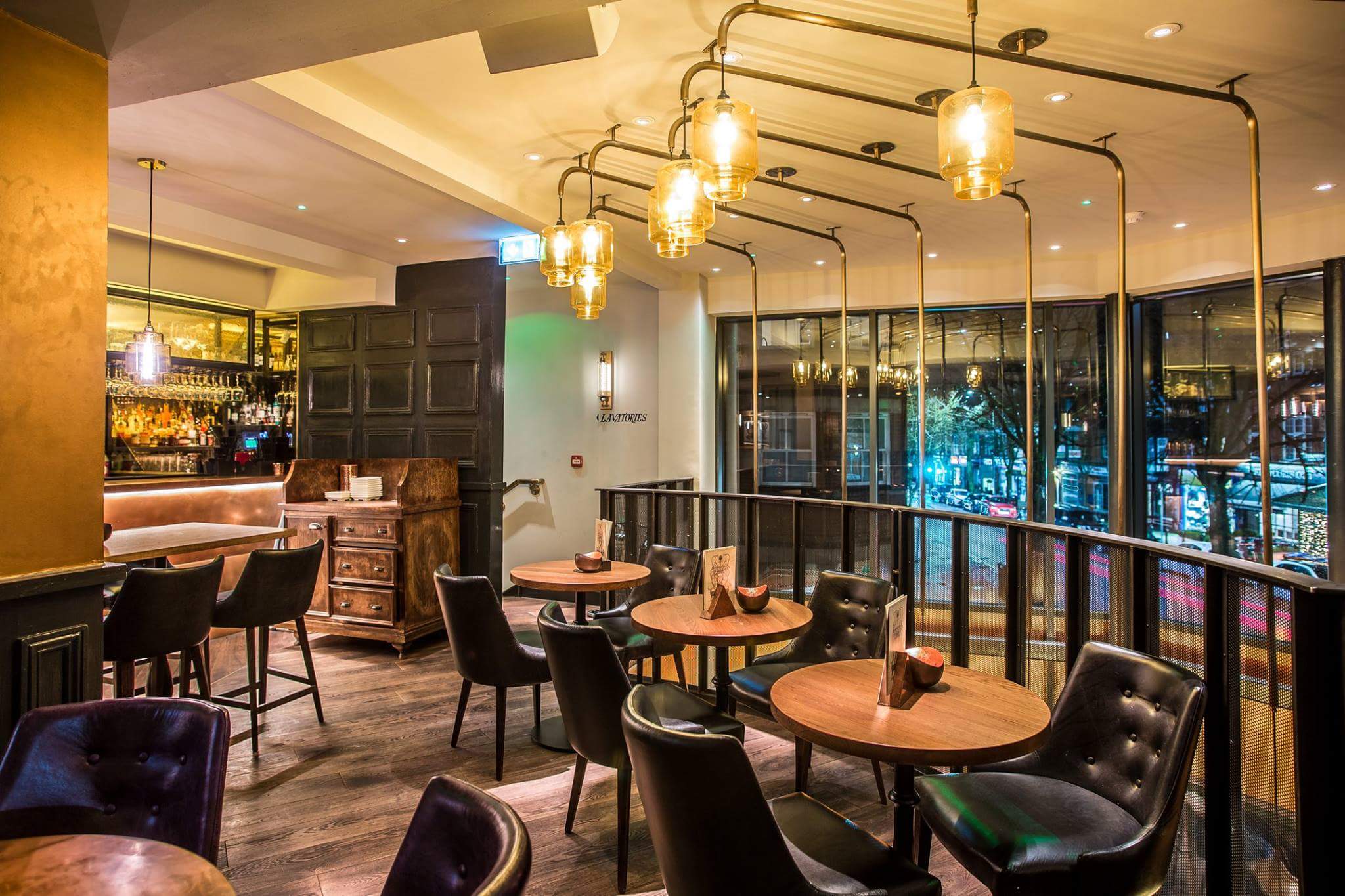 We were pleased to be invited to the latest restaurant to hit Alderley Edge: The Alchemist. With vintage-style lighting, intricate artworks with a mystic lodge motif, and apothecary flourishes (books, jars, fake skulls), it’s a visual treat. Coloured glass casts amber and rosy light around the place, creating a warm ambience and a hint of cathedral-esque radiance.

City centre-dwellers are probably already aware of The Alchemist restaurants on New York Street and Spinningfields – known for the extravagant concoctions on its cocktail menu, and named for the ancient art of potion-making and transformation that had as its ultimate aim the turning of base metal into gold (via the so-called Philosopher’s Stone). With cocktails served in a dazzling presentation of beakers, flasks and phials – all frothing cataracts of dry ice, brilliant hues, and a symphony of whizz-pop and whizz-bang – it’s a very apt name indeed.

As such, we kicked off with a welcome cocktail as we scanned the menu. 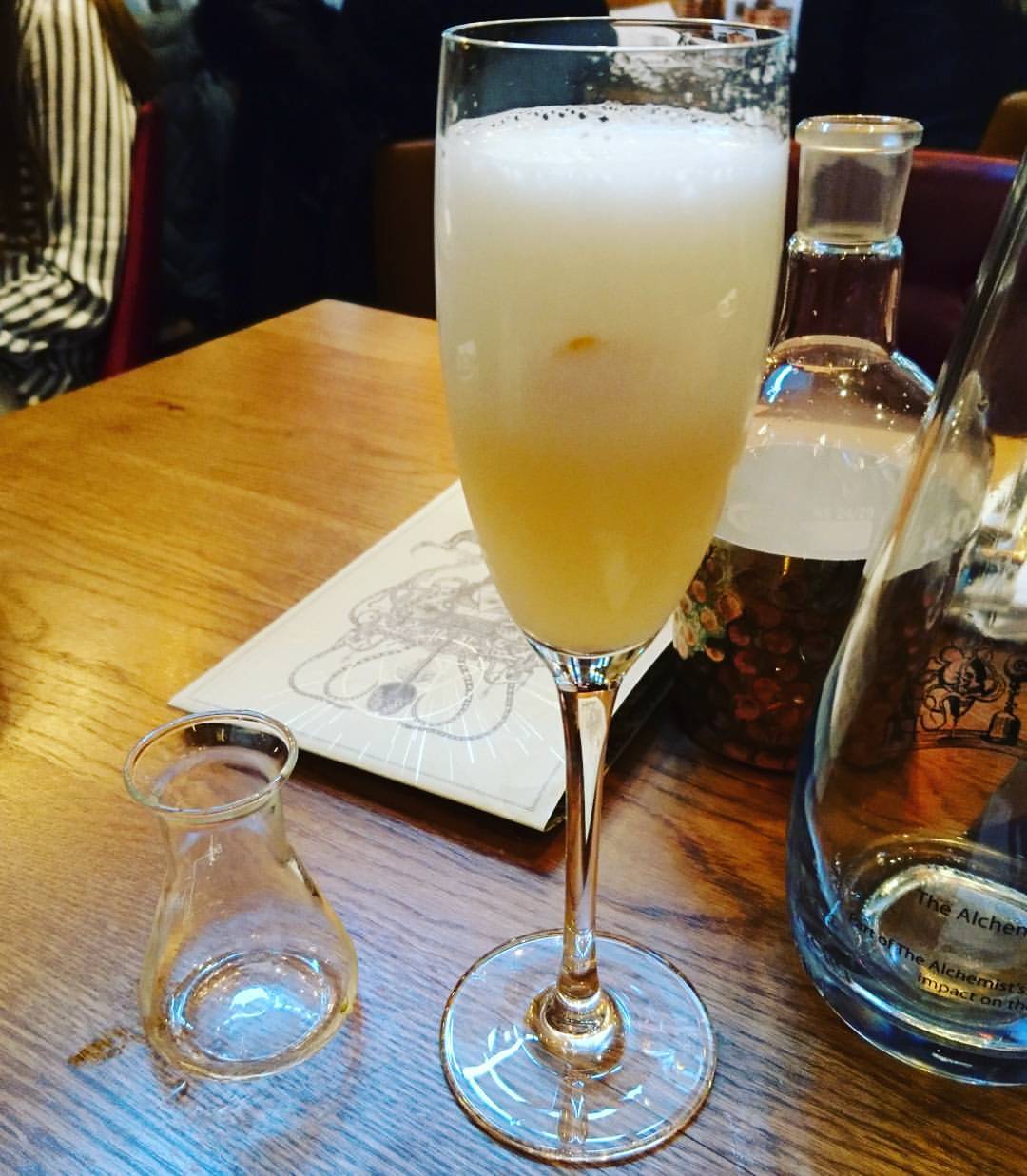 The peaches and cream cocktail was delicious, sweet and silky. We poured the prosecco in and watched it bubble away into a summery broth, while our tastebuds awakened to tingling life with the first sip. 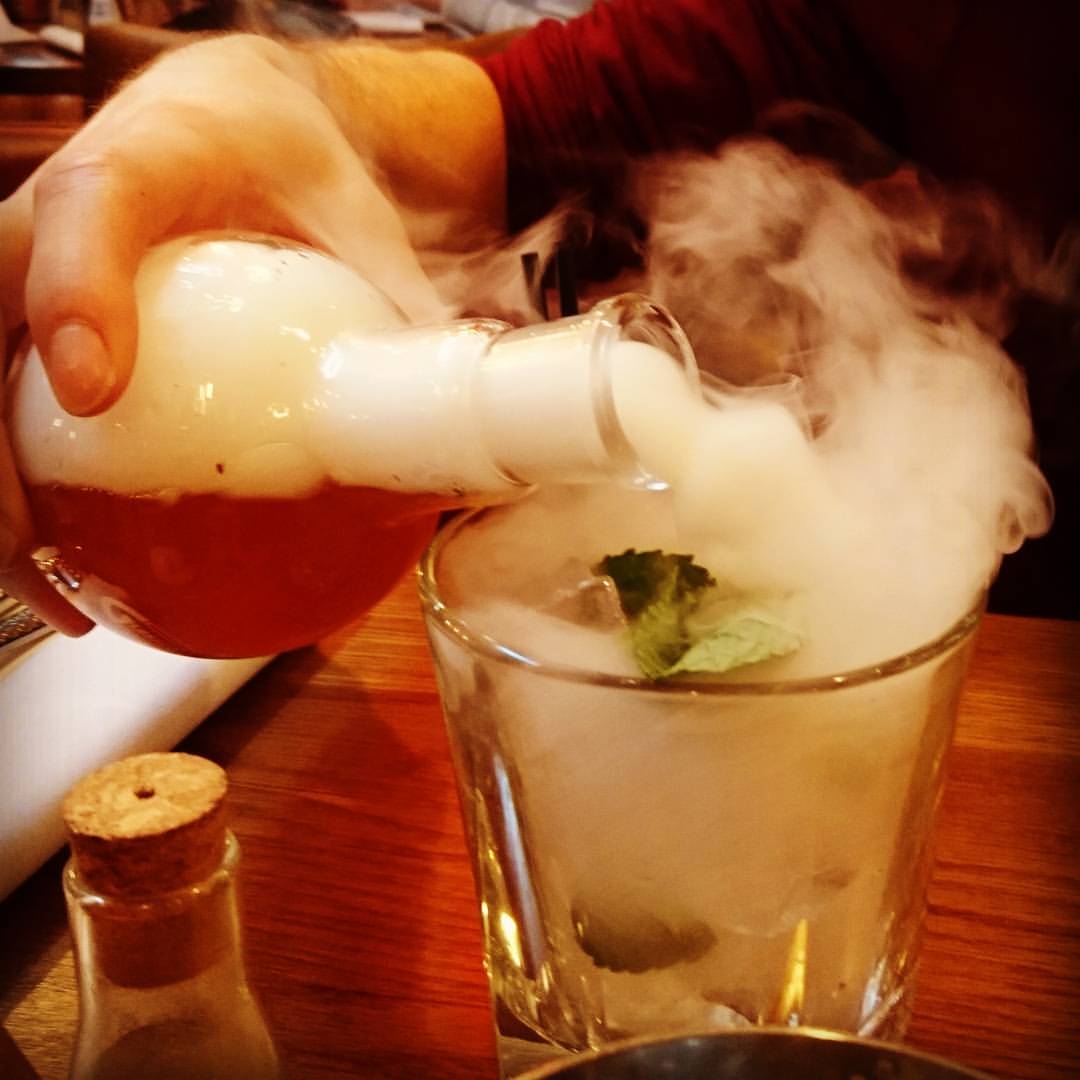 My dining companion poured his own steaming brew over ice with a hiss and a splash. His drink, the tasty Lightbulb Moment, was a slightly fiery, fruity blend of Tanqueray, Pimms, ginger beer, raspberry, lemon and mint.

So far, so good. Both cocktails had us feeling ready for the warmer months, despite it being early February. The clever combinations packed in flavour but also, cleverly, used the other senses in a way that invites a greater appreciation of the food. 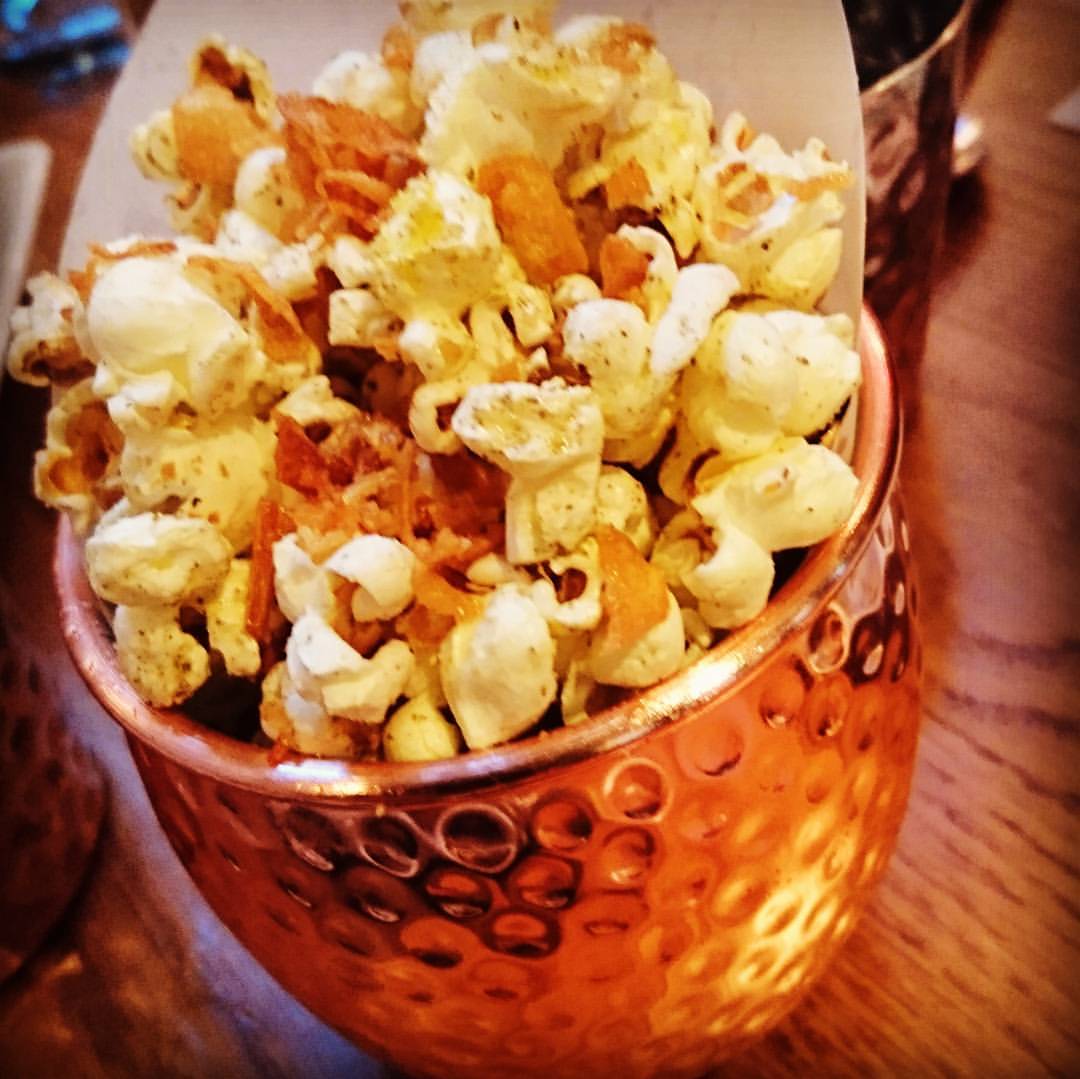 We decided we needed some nibbles too, so tried the sage butter and crispy onion popcorn and the edamame beans. In a little slip for the usually slick service at Living Ventures restaurants, we weren’t asked if we wanted these while looking over the menu, but we put this down to a very recent opening. The server at the next table did ask her diners, though, which prompted us to order some about five minutes after our cocktails had arrived – and we were very glad we did!

The popcorn was a mouthwatering accompaniment to the theatrical drinks. Though I’m not usually a fan of salted popcorn at the cinema (it’s always too salty and gives me a desperate thirst), the addition of buttery and herb made these really tasty, so they get the thumbs up from me. 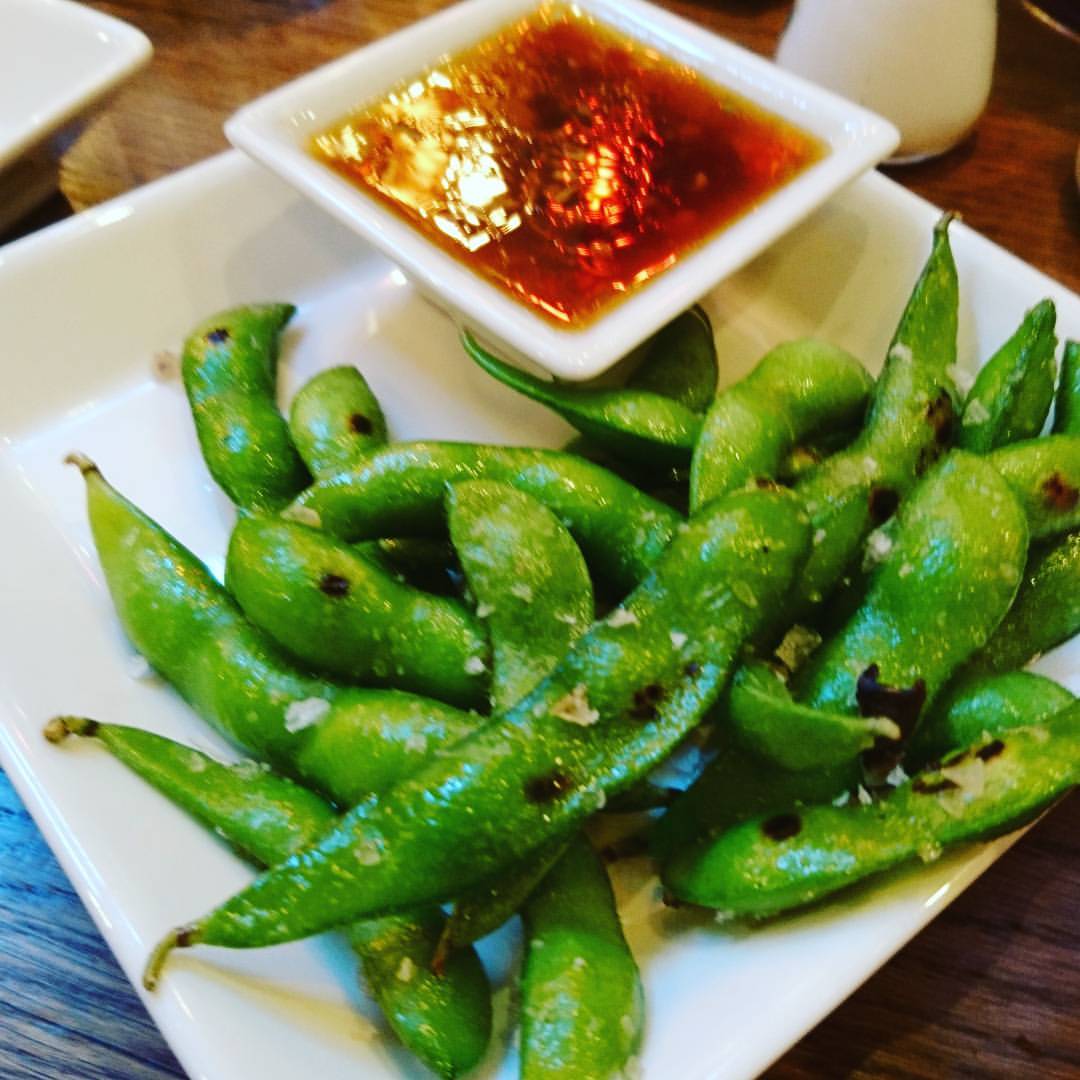 By contrast, the salt and pepper edamame with a decadent soya sauce was juicy and slightly sweet, and therefore the perfect counterpoint to the crunchy popcorn. 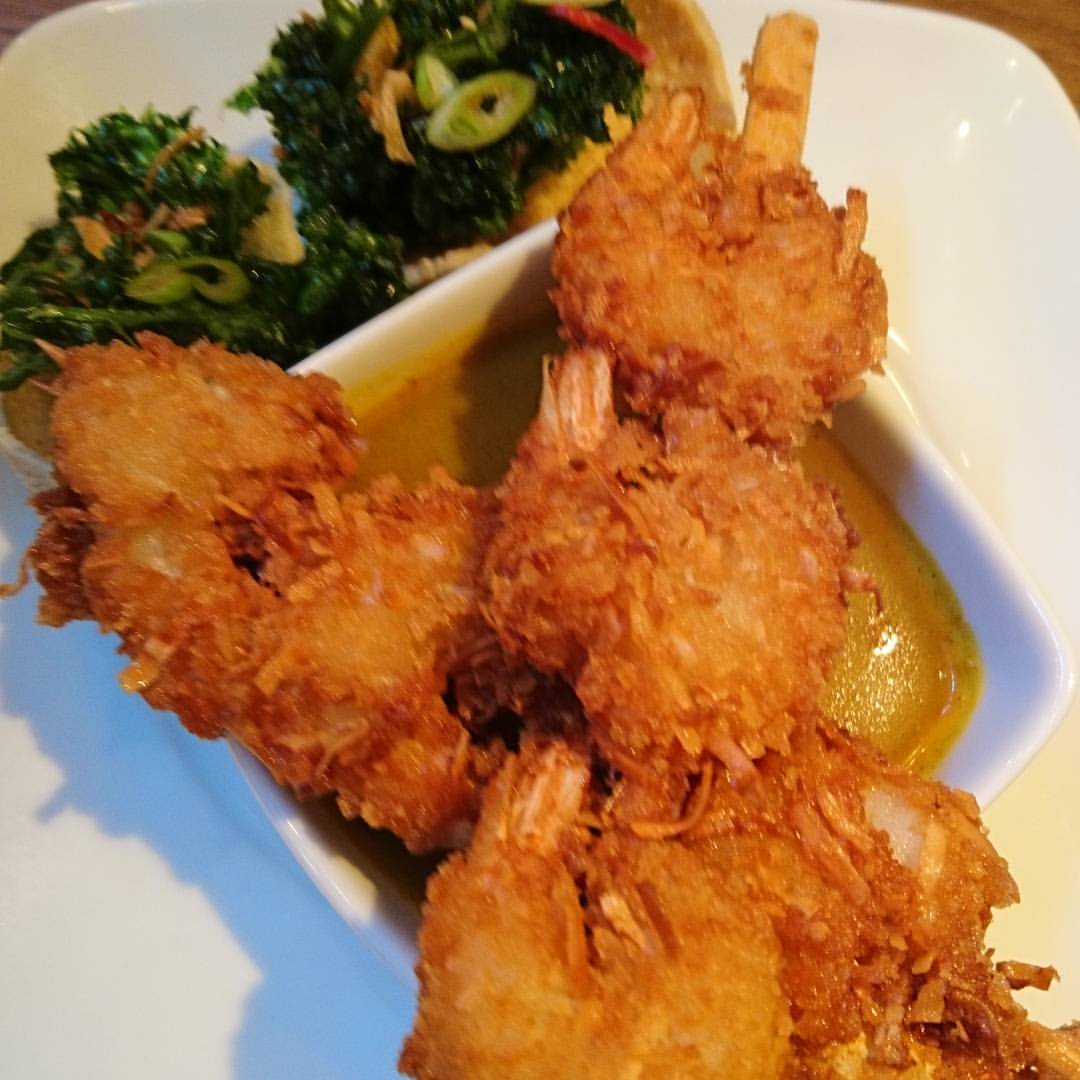 Our first starter was the delicious coconut katsu prawns. With a creamy dipping sauce and crispy batter, these were delicious. 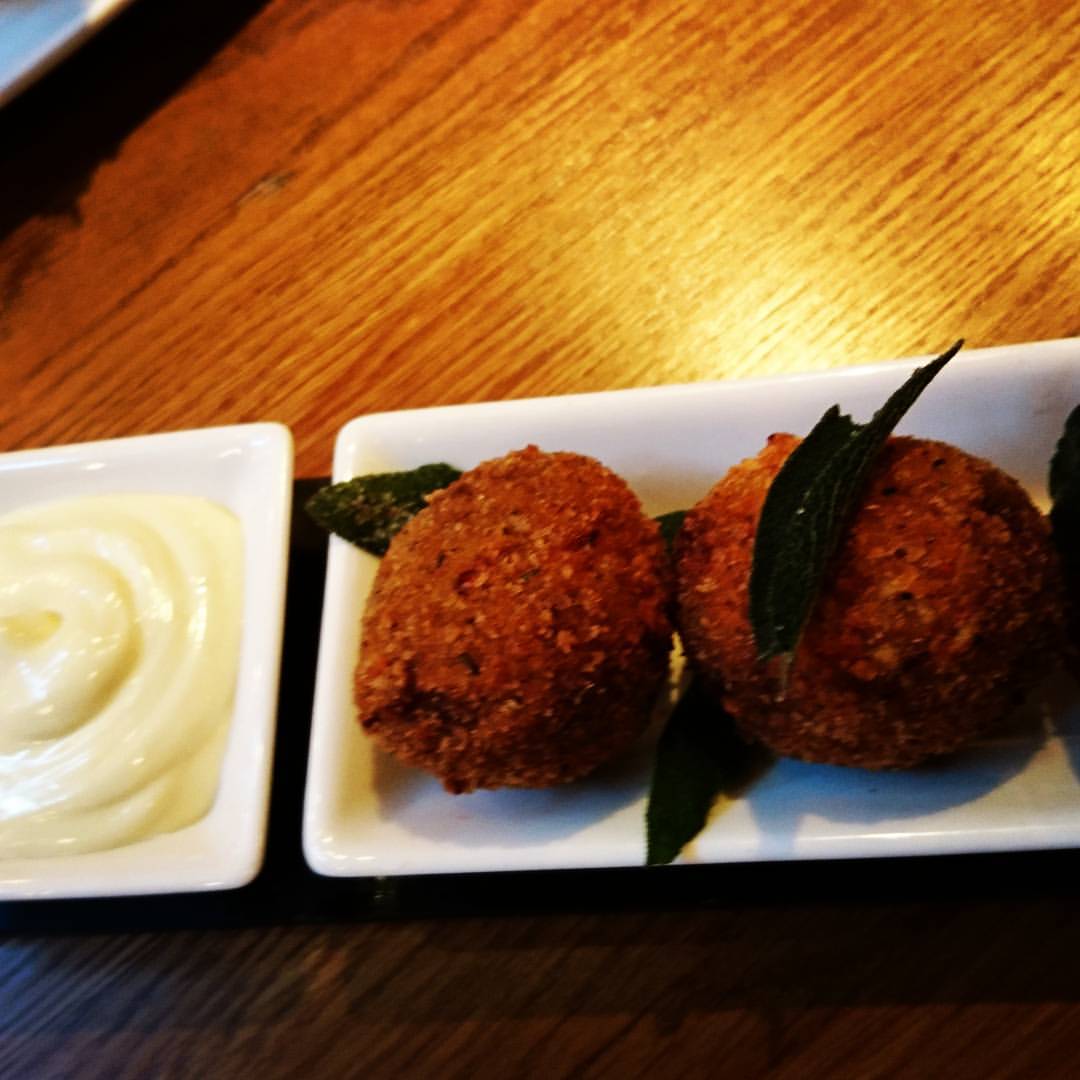 We also ordered the pork bon bons with wasabi mayo. The succulent pulled pork inside melted in the mouth. The mayo was spicy and we kept some aside for the main course, knowing we had salt and pepper fries on the way! 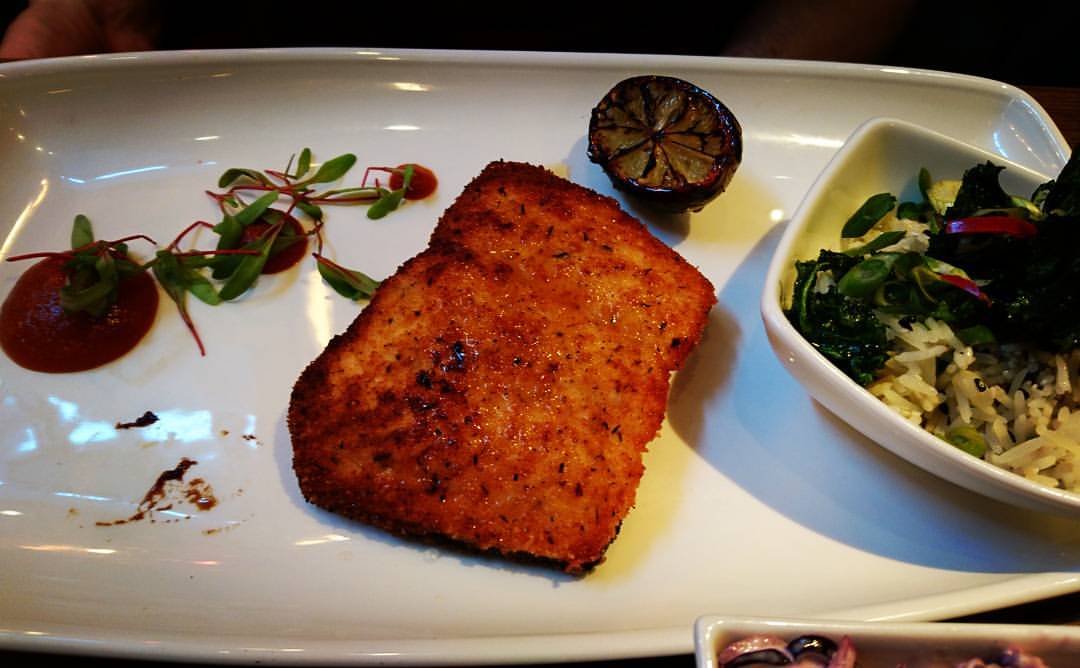 My dining companion opted for the blackened salmon with sesame seed rice and kimchi ketchup. When we poured the soya sauce, left over from the edamame, onto the rice, it livened it right up. Without this, the main was nice, but with rice, sesame and a light crumb on the fish, it was a tad on the dry side but nothing to complain about. More of the kimchi ketchup would have helped. 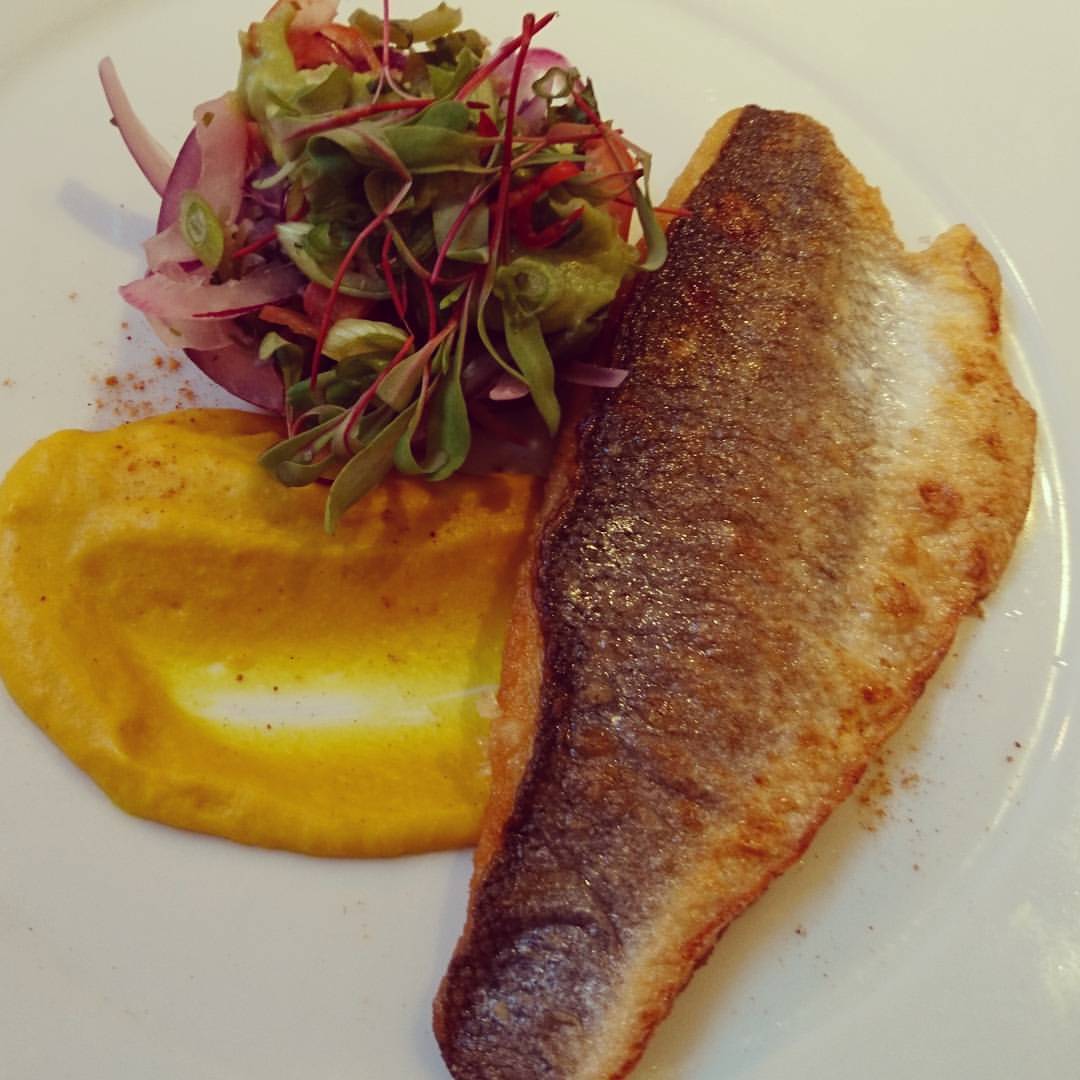 My own main was better: a beautifully presented seabass fillet with sweetcorn puree and chimole. This had more nuance of flavour and was a more moist dish by far. This one was another winner. 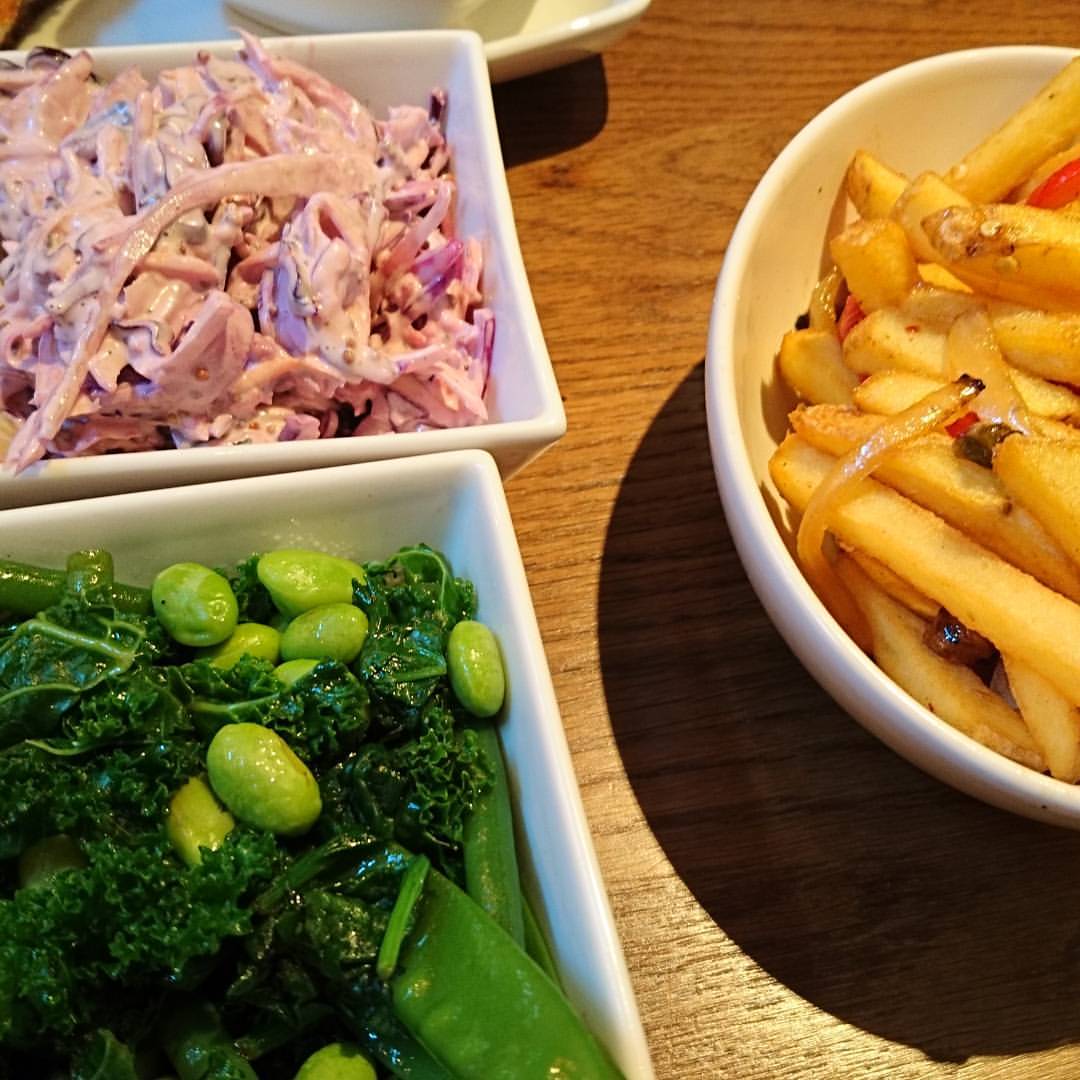 We ordered plenty of sides to zhoosh up the plates, and these were gorgeous. We chose red cabbage coleslaw with a hint of mustard, salt and pepper fries, and winter greens – all of which rounded out our mains fabulously. The fries, especially, were a triumph and these were, hands down, our favourite part of the meal: understated but definitely a guilty pleasure. 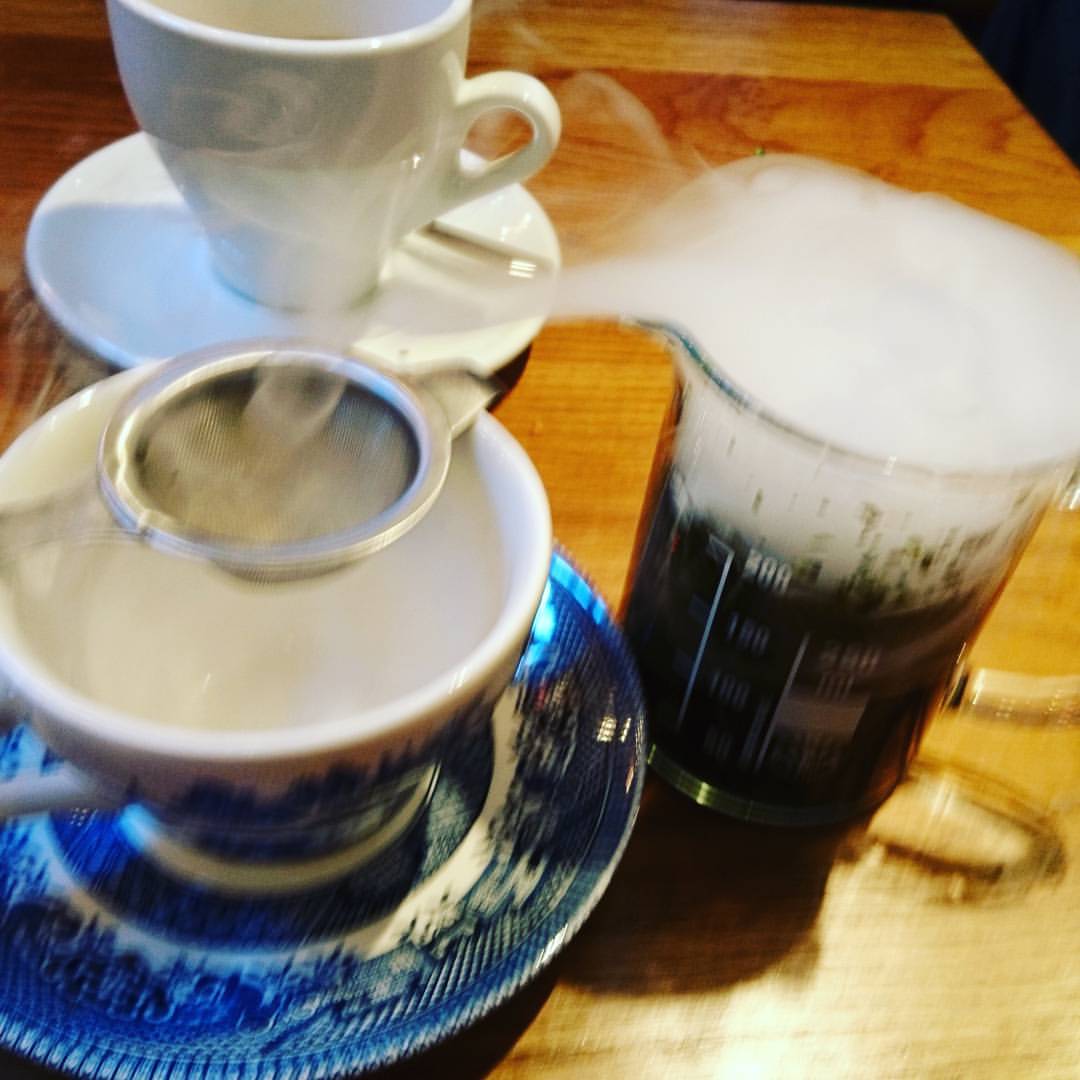 Post-mains, we wanted a non-alcoholic digestif, so went for the house three-mint tea. Like the cocktails, it was a steamy little number, and you could see the mint churning excitedly inside! It was lovely and refreshing. 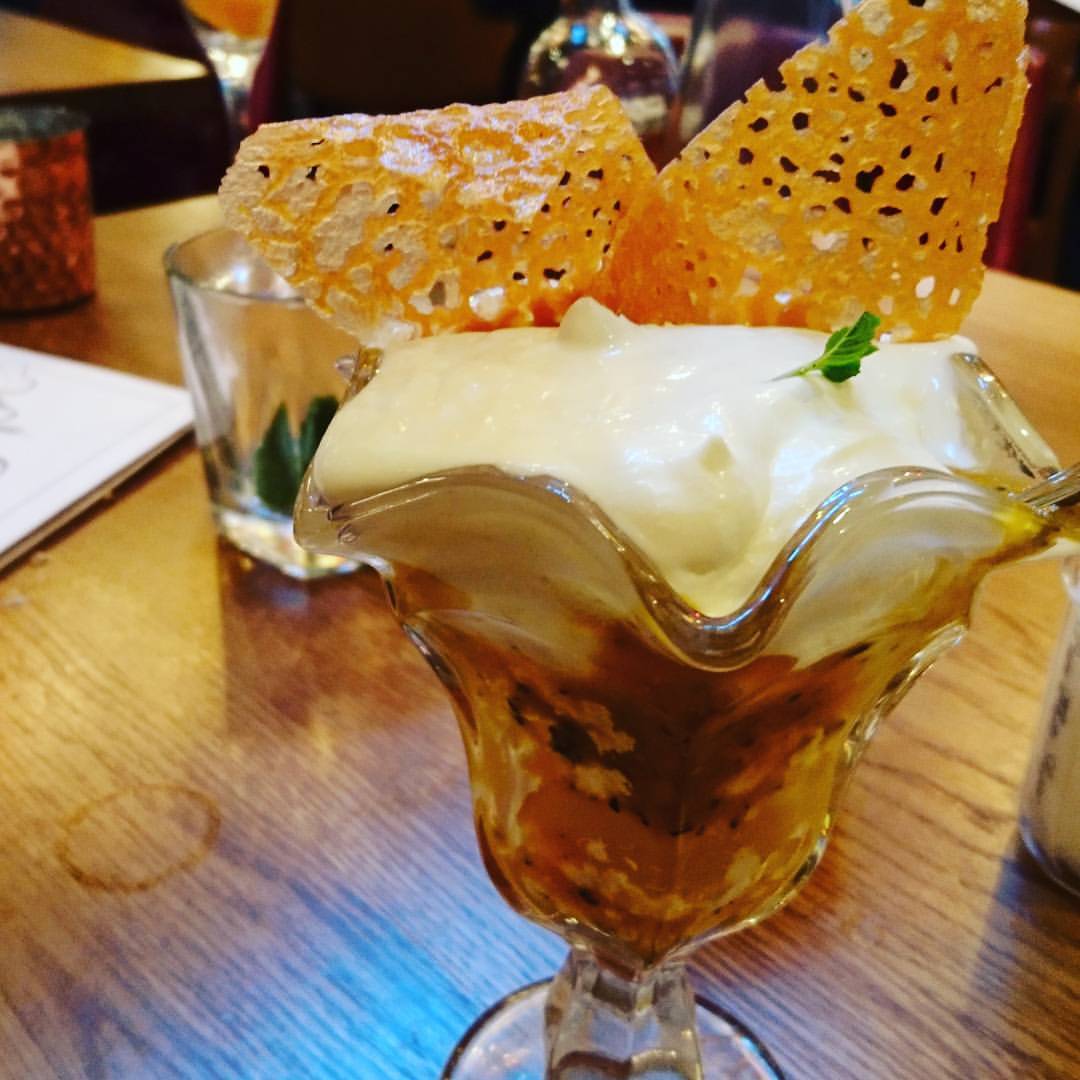 For dessert, I went on to have the lemon meringue and passionfruit mess. It proved to be a light but luxurious dessert. Perfect if you’re feeling full after an epic meal. 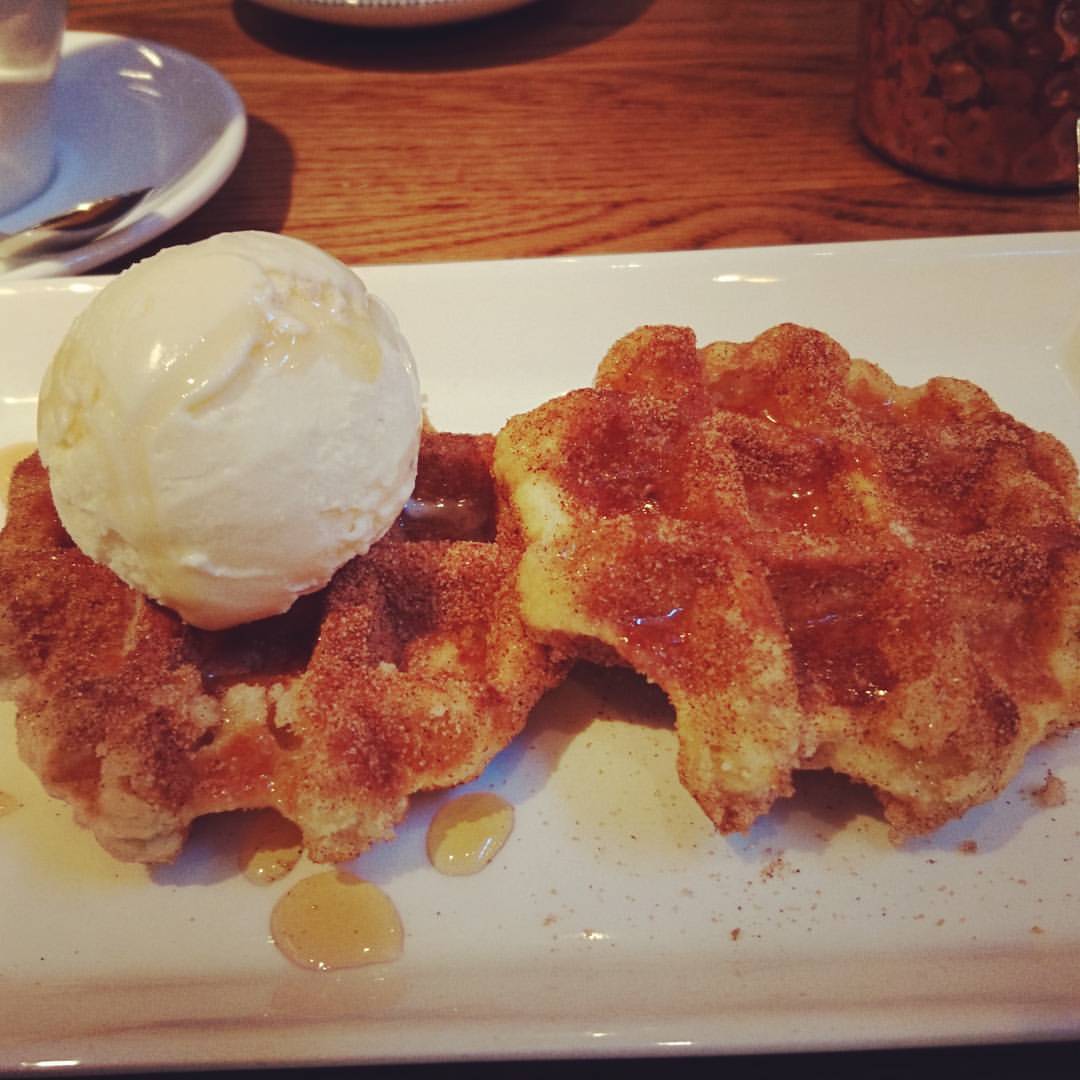 Finally, my dining companion tried the heavier, but very rewarding, cinnamon Belgian waffles with ice cream. They were seductively simple but a perfect way to end the meal. Really, really wholesome and a great way to prepare yourself before you step back into that crisp Northern February.

The Alchemist Alderley Edge scores highly with us – it’s a worthy culinary experiment.