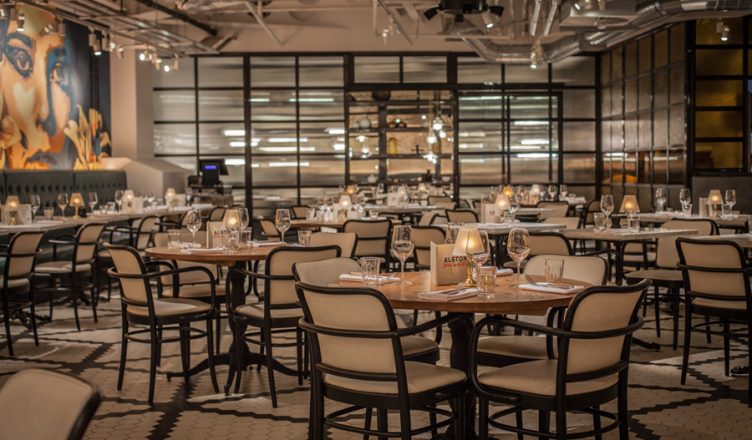 Alston Bar & Beef is an underground restaurant with a trendy basement vibe – the ceiling is all exposed piping and you definitely feel like you’re descending into an ambient space. There are panels of wood and glass which have a vaguely Japanese efficiency, giving a sense of minimalism and structure. All in all, it feels spacious, neat and modern.

There are a few menus to choose from: an everyday a la carte menu, a very affordable set menu (two courses for £15 and three for £18), a butcher’s cut Friday menu and a Sunday roast menu. There’s also a canape menu and for seasonal offerings, there are four different Christmas menus (set menu, feasting menu, buffet menu and canape menu).

Sensibly, the a la carte menu is all kept to one side and is neatly organised, to make finding the right dish easier. All the steaks are hand-picked by East Lothian butcher John Gilmour, comprising the very best Limousine cross Aberdeen Angus beef. Its grass and barley fed, and then dry aged on the bone for at least 35 days to give it more flavour and increased tenderness.

The set menu is robust, with three options for each course, and the option of upgrading to one of two steak options (the flat-iron steak doesn’t cost any more; the rump costs £3 more).

There’s also a sizeable drinks menu, with a selection of Cold Compound Gin Infusions, using ingredients by forager and naturalist David Winner. These are highly delectable and worth a visit to the venue on their own. All the Alston gins can be served in a copa de balon with Japanese ice balls, garnish and mixer.

We started off with one each of these gorgeous Alston Cold Compound Gins, and they were exquisite. We tried first the Strawberry & Black Pepper (my favourite) and then the fragrant Orange & Vanilla. Both were served with Fentimans Refreshingly Light Indian Tonic Water. The infusion of fruity flavours really made these drinks refreshing, so even if you’re not normally a gin fan, you should at least give one a try.

Onto the food, then. To start, we had wonderfully pan-fried scallops with ribbons of cucumber and a yogurt sauce. These were absolutely delightful. The scallops were tender and packed full of flavour, which was finely balanced by the creamy yogurt sauce and the refreshing cucumber. This was a very tasty dish and we highly recommend it.

My partner tried the chicken and king prawn skewers with cold barbecued sweetcorn and a spring greens and apple coleslaw. The cold barbecued sweetcorn was a tad strange at first, though it was a nice flavour – we had expected hot sweetcorn because of the way it was charred. The chicken and prawn are also blended together, so you can’t necessarily distinguish one from the other – but it’s a solid and appealing dish which is likely to be very popular.

For the first of the mains, I had a medium-rare fillet steak with house salad and Bearnaise sauce. Cooked to perfection, the steak was succulent and the decadent sauce was a dream.

My partner had the gorgeous three-rib lamb with peas, broad beans and pancetta, moistened with a mint jus. This was a surprisingly enjoyable dish. The lamb was rich and gamey, and the pancetta and mint were nicely balanced flavours which made the dish wholesome and fresh at the same time.

We ordered a side of broccoli with this, but it probably wasn’t needed: this was a sizeable portion on its own.

We had another quick gin and tonic while perusing the dessert menu. This time we tried a Pineapple & Coconut Gin from the Alston Cold Compound Gins list. This was tropical and uplifting, and probably our second favourite, after the Strawberry & Black Pepper.

In the end, we were so full, we had to split a dessert (and then only because we wanted to try it for completeness’ sake). However, we were really glad that we did. We ordered a unique take on an Eton mess, featuring meringue, coffee Chantilly cream, summer berries and fruit coulis. This was incredible. The cream made the meringue melt into a gorgeous confection of textures and flavours. It was definitely our highlight of the night.

Alston Bar & Beef is an exciting Manchester restaurant with  exquisite dishes, fine cold-compound gins and a stylish interior. Given that it’s also home to the uber trendy bar 1837, it’s an attractive proposition for dinner and a show, or an evening of food and drinks in and around the Corn Exchange.