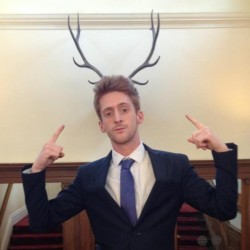 The Epic Of Gilgamesh is a colossal poem from ancient Mesopotamia that depicts its titular hero as a war-mongering warrior king (though we’re sure you already knew that – Vada readers are a clever bunch!).

Gilgamesh decides to go on a bit of a rampage with a god-created wild man (standard Saturday night then) and ends up slaughtering a number of beast and deities alike.

The big question is though: what destiny awaits such a legendary figure after the bloodshed has subsided and aforementioned slaughtering has died down a little? The answer: he sets up shop in Camden and puts those sword swinging skills to their optimum use by slashing up some fresh sashimi.

Yes, in the heart of Camden Stables Market lies the formidable Gilgamesh Restaurant – a Pan Asian wonder with its finger firmly on the pulse when crafting an imaginative and original dining experience. 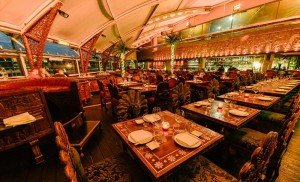 As soon as you ascend in to the restaurant you are hit full force with the Narnia effect – seemingly stumbling from the familiar hustle and bustle of Camden Market into a lavish dining space from an ancient world.

The grand room is furnished exquisitely with opulent golds and heavy carved furniture, it steers clear of gaudy instead giving diners a real sense of space and grandeur which is then wonderfully juxtaposed by the sight off freight trains occasionally rumbling by on a nearby overground line.

Thankfully beauty isn’t only skin deep on this occasion and the food proves as delectable on the palate as the décor does on the eye. 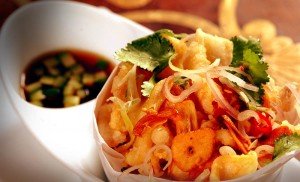 I opted for the crispy squid with Thai chilli and banana shallots (which was served with adjud sauce) to start. Squid seems to be a popular choice up and down the country at the moment, but this is one of the finest iterations I’ve come across in a long time. The squid was tender and bursting with flavour, while the accompanying chilli gave the dish a refreshing kick and was, in turn, masterfully balanced by the adjud sauce.

The Malaysian seafood jungle curry that followed was fantastic. Hot, rich and boasting complex flavours, this was an immensely satisfying dish. The squid was (as now expected) tender and flavoursome, the prawns cooked to perfection and the overall dry heat was given a steely citrus edge from the well judged inclusion of lime. The accompanying coconut rice was suitably sticky and fragranced with a deft hand. 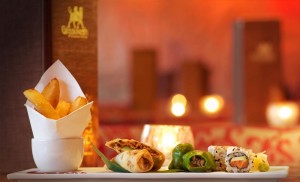 For dessert I chose the pistachio and coconut mousse cake which was wonderfully buoyant and seemed to melt on the tongue. The flavour of this dish comfortably matched it’s exquisite presentation: satisfyingly sweet but not overpowering. I had assumed that a keen focus on sushi and sashimi, may have left the dessert menu a little unloved, but there was a bevy of options and judging by my choice, they had all been injected with as much innovation and impact as the rest of the evenings offerings.

And it would seem as though innovation is very much at the forefront of this restaurant’s mind at present as it is about to launch two new star attractions:

A Belle Epoque champagne is soon to add a distinctly Parisian twist to proceedings and will offer diners a taste of early 20th-century decadence gay Paris style.

The newly created Private Chef’s table will allow diners to watch their dishes being prepared (through a specially comissioned gold linen encrusted glass screen of course) and to have the expert guidance of the restaurant’s head chef on tap throughout their meal. 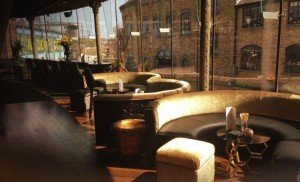 The moral of the story here is that demigods do it best. Providing a bespoke dining experience, with elegant ease (service throughout was attentive and charming, steering well clear of fussy) Gilgamesh is a knockout restaurant that earns its royal title. Brava!

View all posts by Benedict Smidowicz →