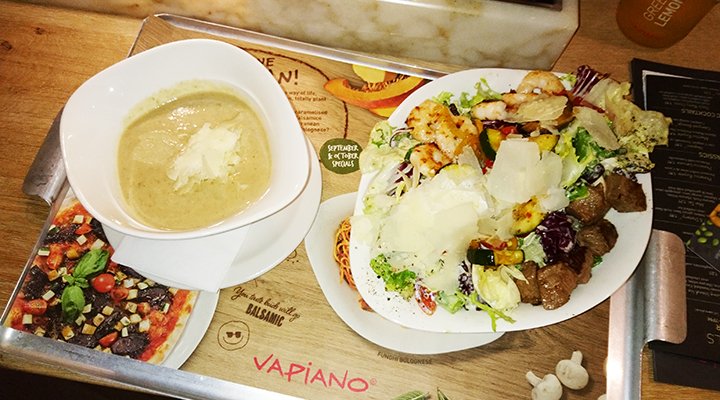 I’ve tried Vapiano before – once when it first opened, and before that in their flagship London restaurant. The concept is a good one for fast (ish) food. Everyone gets their own card and orders individually at a number of stations dotted around the restaurant.

The idea is that you shouldn’t ever be waiting, because while one item is being prepared you can nip over to grab, say, a salad or some bread. For the dishes that take a little while longer, you’re handed a black plastic device which lights up red when the food is ready. Then, whenever you’re ready to leave, you pay the balance due on your card at the entrance. This avoids splitting bills and means you can leave early (or stay later) without worrying about the inconvenience that can cause.

Vapiano, as a concept, is primarily designed for groups. You can sit wherever you like, with whoever you like, but because you might all be off queuing at different times, being in a group minimises the chance you’ll be sat on your own for ages. It’s not the place to take a date but it’s perfect for a meal with buddies after the cinema or for a birthday party where you’re unsure just who will turn up. Usually, I’d recommend it, based on my past experience. However . . .

The success of the concept varies, and part of me wonders if it’s the location itself that causes this. The London Vapiano was a bustling, lively place where the food came out quickly and the chefs got on with the job of serving you. That face-to-face contact means you can order your food exactly as you want it. Great, you might think.

In the Manchester restaurant, however, the chefs didn’t particularly look like they wanted to make eye contact. They kept their eyes fiercely on their cooking and then reluctantly looked up when they had to. Perhaps the lack of practice with dealing with customers was to blame – or maybe, as chefs, they’re simply more interested in getting on with the cooking than with the task of smiling too. 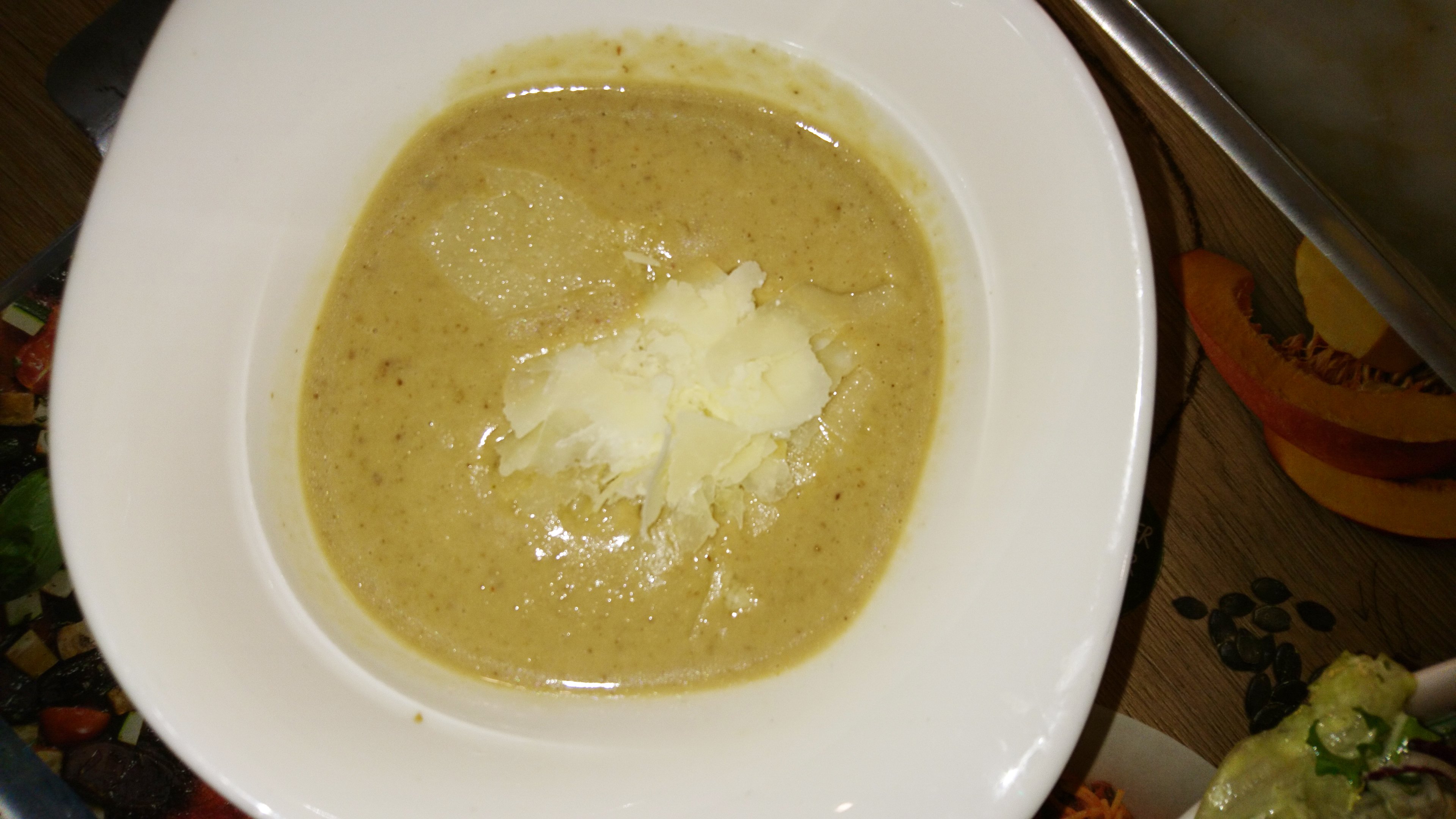 Though it was not – by any stretch of the imagination – a busy evening when we dined at Vapiano, there was something of a problem with waiting. Perhaps if we hadn’t come as a pair, and had come with a big group, this wouldn’t have been so noticeable – potential diners take note.

While the pizza chef gave us our buzzers to alert us to the pizzas being ready, the other stations didn’t do this, presumably because the food was supposed to be prepared while you wait. Alas, the chef making the salads was working particularly slow (opening a bag of leaves took a surprisingly long time) and even though I ordered some soup too, which was already prepared and just needed putting in a bowl, I was sent away and advised to return after five minutes.

This meant a few awkward trips round the corner to see if my dish was ready, to finally find it standing on the counter top by itself. When I asked after the soup, the chef, embarrassed she’d forgotten, quickly ladled some into a bowl for me, which begged the question of why she hadn’t given it to me so I could enjoy it while waiting for the salad.

Thankfully, both the insalata reef’n’beef and the chestnut soup were delicious, and by this point I was famished. I wolfed down the salad, which was delicious with rucola dressing, and far more filling than you’d expect with its succulent chunks of roasted veg. The soup was creamy and especially worked with the shaved parmesan on top. 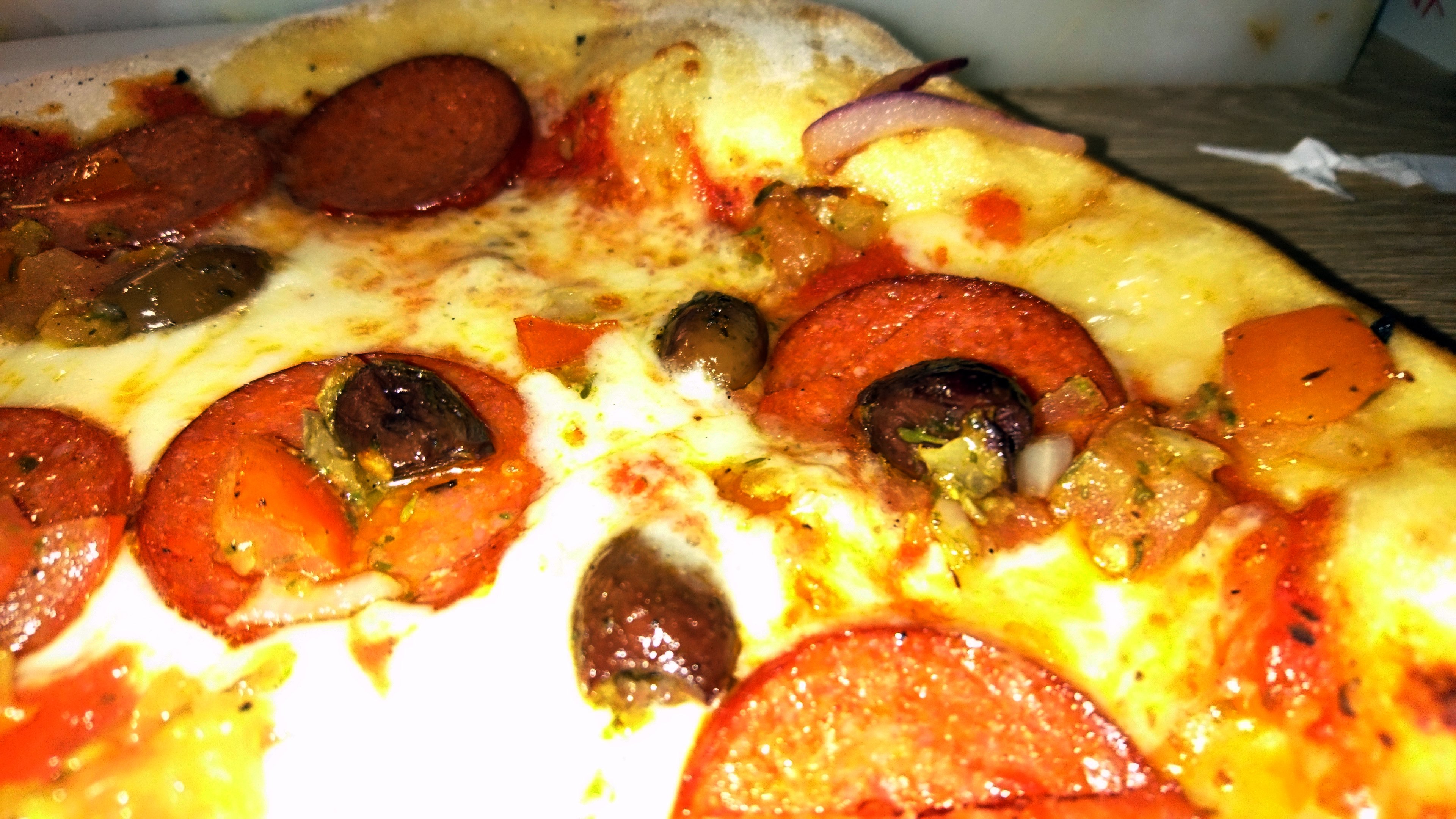 I was finishing up as my dining companion brought over the pizza: a colourful and saliva-inducing Toscana. The pizza was exceedingly tasty and our only complaint was that the base was perhaps too floppy. We were required to eat it with a knife and fork because it sagged too much to hold the weight of the toppings. It’s not a deal breaker, and I quite enjoy sloppy pizzas, but some people do sulk if their toppings end up in their laps. That said, the taste and textures were enough to make this a winner for us: spicy Italian sausage, pesto-marinated olives and tomatoes.

The pasta, however, proved a problem. There were two stations for pasta on different corners of the kitchens. Queues had formed in both, and it was only after a while of the chef resolutely avoiding eye contact that he came to the second queue (the one my dining companion was in with three other people) and snapped that the station was closed and that the people queuing should join the other queue. What resulted was a 20 minute wait for pasta – which, given the fact the pasta is already cooked when you arrive – is simply unacceptable and put a downer on our evening. We had to ask the manager to put up a sign informing customers the station was closed to save them from the rude talking to we’d had.

To make matters worse, the pasta was middling to mediocre even after the wait. I’m sorry to say it was so dull I can’t even remember which one it was – even after staring at the menu for 10 minutes trying to remember its defining features. We left most of it and were glad to leave at this point – which upsets me to write, because I very rarely have bad experiences in a restaurant. It wasn’t that everything was bad, just that the sum total was disappointing after a lovely visit last time, and that’s often worse.

Surprisingly, one of our absolute favourites of the night were the Vapiano-branded iced teas. In a range of flavours, these were light, fruity and refreshing, and definitely worth trying. We especially liked the iced red tea with pomegranate and the iced green tea with lemon prickly pear. These were a real delight.

Overall, I hope this was simply a bad day, but perhaps the quietness of the Corn Exchange is spreading its tentacles of apathy to the nearby restaurants. The food was mostly excellent and, if you came in a big group, you’re likely to enjoy the informality of it. You may have better luck with the service than we did. Only time will tell.