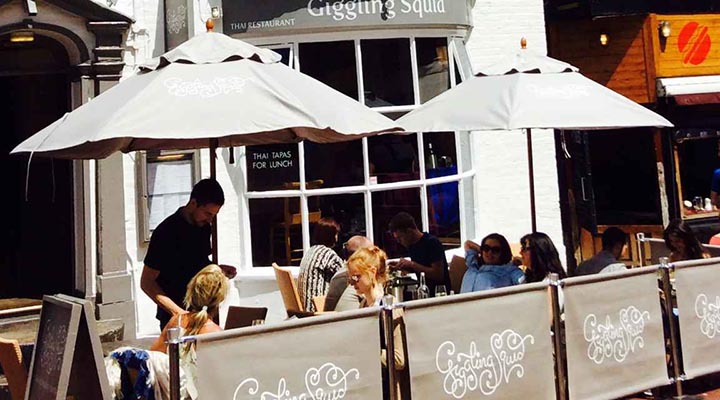 The Giggling Squid is known across Brighton for its authentic Thai cuisine. The restaurant on Market Street, which is tucked away off the high-street in an old fisherman’s cottage, serves a colourful menu of Thai street food and coastal favourites.

The chef at the Giggling Squid serves up dishes made with specially imported spices, while fresh local catch is added to the mix. This makes for a delicious blend of locally-sourced and authentic Asian cuisine, which is both light and tasty.

Depending on how hungry you are, you can enjoy mains like Thai curry, massaman curry, pad cha and more – or you can opt for tapas-style small dishes with prawns, scallops, duck and chicken cooked in various sauces, salads and spices.

Desserts include a very tasty sticky rice banana parcel served with a dollop of vanilla ice cream; and an iconic black sesame seed ice cream, which was both creamy and nutty, with a slightly savoury crunch.

Lunchtime diners might also enjoy the restaurant’s taster sets, to get a real feel for the range of dishes on offer, and to put the decision-making into the hands of the experts. This is useful because, when faced with a tapas-style Thai menu with lots of choice, we weren’t sure how to much to order.

We had one large dish and five small plates, and we probably could have packed in a little more after dessert. Our waiter had recommended 3-4 dishes each, plus a large dish to share, but we’d not wanted to seem fat when faced with a handsome man.

Don’t do what we did; ignore your vanity and just pig out. The dishes are small enough that you can happily try a few different things, and they’re cheap enough, anyway, that you might as well not skimp on what you order.

The other good thing about a tapas-style menu is that even if you do decide you haven’t ordered enough, you can order more half-way through and it’ll still come pretty quickly without ruining your meal.

According to Giggling Squid legend, there was once a group of about 12 gay men eating at the Thai seafood restaurant after some kind of big gay celebration. You know the kind of thing – a Pride parade, a Mr Gay UK heat or some sort of poppers festival.

While enjoying the fresh, tapas-style dishes – which serve up catch straight from the harbour – they spotted a pair of men who raised their suspicions. At the end of the meal, the pair did a runner – or rather, tried to do a runner. They were hotly pursued by the dozen gay guys, who caught them and sat on them until police arrived.

It turned out the men were wanted by police for a non-appearance in court. After being bundled off to serve some time at Her Majesty’s Pleasure, the two men presumably became the butt of many jokes at their local nick.

Giggling Squid offers fantastic food, very friendly service, and all at reasonable prices. If you want to discover more, check out their website.