It’s been a long time since I’ve been to Slug and Lettuce. Maybe 16 years. It’s not that I have anything against Slug and Lettuce, but actually it’s because it’s not somewhere I would think of going. I was pleasantly surprised arriving at Slug and Lettuce in Spinningfields.

We were seated at a nice table in the window, overlooking the river, where our order for drinks was taken. I ordered a Mojito Royale and my colleague ordered a large glass of white chardonnay. We quickly glanced over the menus that were laid in front of us. The cocktail menu listed 2-for-1 cocktails all day every day. That was a welcome addition but also a licence to treat, so we advise due restraint on work nights…

Slug and Lettuce also has 50% off food on Mondays, which makes it a veritable bargain – the prices at Slug and Lettuce are exceedingly good value anyway. In fact, it was this good value aesthetic, despite good service and a decent menu, that would endear us to the restaurant.

The cocktails were great for the price – which is heartening, given the sloppy drinks sometimes hastily served up during cut-price cocktail hours. Presumably, the fact there is no cocktail hour (the drinks are always this price) means there’s no mad rush on drinks to hamper quality, and standards stay consistent.

My opening Mojito Royale was refreshing and well muddled. It’s always surprising to see what restaurants call a mojito these days. Often, wait staff moonlighting as mixologists overmuddle their mojitos which makes them taste dull and leafy instead of fresh and cool, and, appearance-wise, the bashed mint leaves in such lackadaisical liquid offerings turn brown and unappetising. In this case, Slug and Lettuce passed the test – mine was a well presented and tasty cocktail, perfectly quaffable for the price, and a sparkly start to the night.

For my starter, I opted for North African adventure. I ordered a dish of Moroccan lamb with couscous, chickpeas and tomato relish. My colleague instead ventured to the American South with fried chicken goujons and a barbecue dip. Although we opted for separate parts of the world, we shared a positive experience. 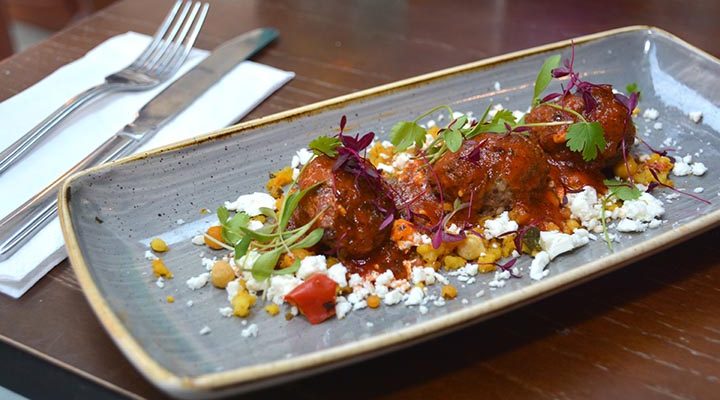 The Moroccan lamb came with a decent portion of goats cheese (it was neither skimpy not overpowering) and just a little hint of cous cous. I was worried that the chef might go wild with the cous cousin ratio, and that this starter might leave me feeling overly full up prior to my main course. Sometimes high street restaurants have a bad habit of making up for poor meals by giving you too much of the cheaper ingredients such as the carbohydrates. Luckily this wasn’t the case – there was just a little bit of couscous and a lot more of the goat’s cheese and chickpeas. The lamb itself was very tasty and the portion size was decent. Topped with the subtly spicy Moroccan tomato relish, this was a really nice combination of ingredients and a very satisfying starter. 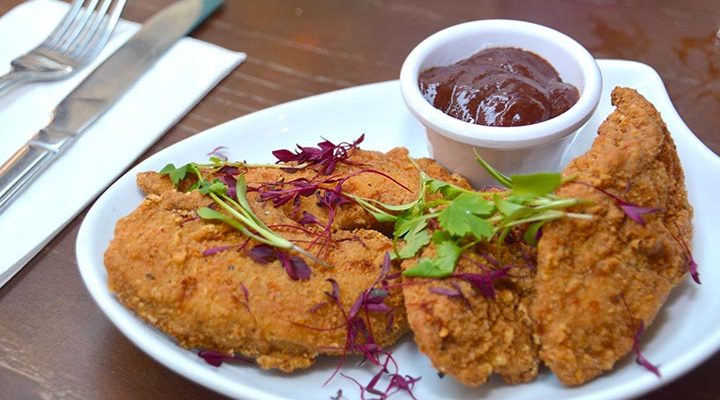 When my colleague’s Southern Fried Chicken arrived, it too the form of large, crispy goujons. I would say that each goujon was maybe a third to a half of a whole chicken breast. That meant that my colleague had at least one and a half full chicken breasts lightly battered on his plate. Again, that made for a very decent portion, and a tasty one at that. The batter was perhaps a little dryer then I would have liked and not as moist as, say, KFC. My colleague did think that it was tastier overall than KFC, and he actually preferred it, so what do I know? I think it’s fair to say the batter was more crumb than crisp, but with plenty of crunch in any case.

Both of the starters came with a light salad garnish which I will say appeared to be pretty much exactly the same on both plates. It’s interesting that we noticed this, because when our mains came, we noticed again the same familiar garnish. This isn’t a complaint so much as it’s a curious oddity which I thought I’d mention. Maybe the side salad stores were depleted due to a busy day. 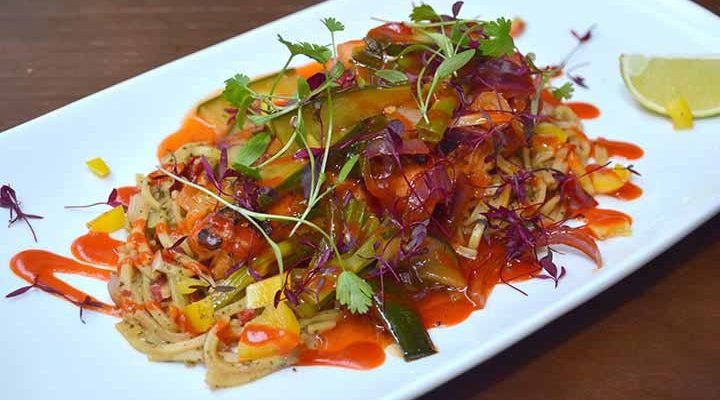 For my main course I ordered the pan-seared salmon fillet with Thai-style noodles. My colleague had ordered the epic Asian burger. There was a prompt service between clearing out starters and bringing our mains, which is always a good thing if you’re on a busy working lunch or you have an itinerary to keep to.

The first thing I noticed about my salmon fillet was, again, the portion size (a common theme indeed). As with our starters, there was rather a lot of food on my plate – and that’s always a good thing. It did not look quite as nice as the picture in the menu, but then again these things never do. I did notice that the noodles were quite a lot softer than they appear to be in the picture. They were probably on the mushy side of overdone. They were not intolerable but neither were they something to write home about either.

The salmon fillet itself, however, was succulent and flavoursome. It was crispy on the outside and cooked all the way through. If I came again, I’d probably request for it to be crispy on the outside and ever so slightly pink and moist in the centre, just as a personal preference. It can be quite difficult to get that right and many diners would prefer their fish cooked throughout, so again this is just a matter of personal taste (and a recommendation if your tastes match mine – it always helps to ask for food exactly how you want it beforehand). There was, however, a tad too much of the sweet chilli sauce. Actually I’m being generous here, rather like the chef. The sauce was a little bit overwhelming. Much less would have been far nicer – in fact, they could have just put a little drizzle on the salmon itself and then put a little serving on the side for you to add your own. That would have been much better, but again it’s a point I’d raise upon ordering next time, just in case. 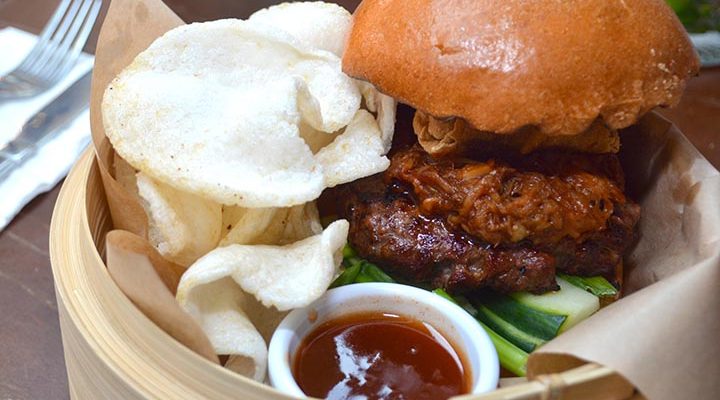 My colleague’s burger was whopping. A beef patty topped with pulled pork, in turn topped with duck spring rolls, and bound up in a big brioch. Instead of chips, the Asian Burger was served with prawn crackers. Although a hefty heaping of food, he absolutely loved it. He wolfed the whole thing down, despite the fact that we were pretty full from the start as already. I attribute this to the fact the heavier potato fries you’d expect with a burger were switched, perfectly, with the much lighter prawn crackers. It worked on two levels: letting the burger itself take centrestage and allowing space for a starter or dessert.

Overall the entire meal (two starters, two mains, two cocktails and a glass of wine) would set you back just over £30, taking all the discounts into account. Even without the discounts, you’d only be looking at maybe £40-50 for two people. That’s exceptionally good value. The service was very good – the servers were keen but they don’t harass us. They were friendly and they were very helpful.

The whole affair felt rather laidback, quick and easy – which is perfect for the clientele, which largely comprised an after-work crowd, and a couple of families taking their adolescent kids for a summer holiday treat.