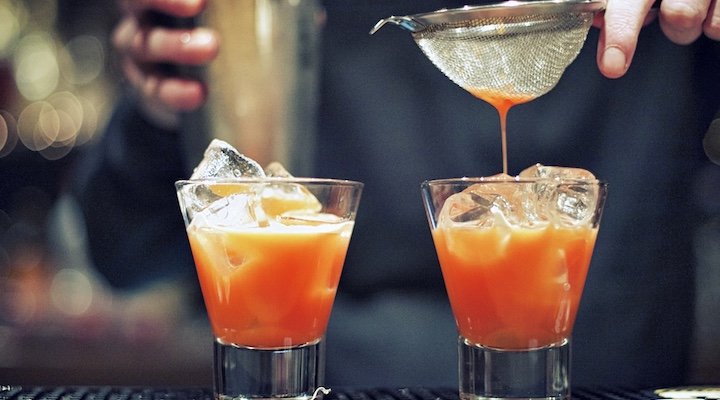 The first on our list doesn’t open until late September, but this provides ample time to plan when to visit Alcotraz – London’s first prison inspired cocktail bar. This pop up will be around for 3 months, and we will definitely be trying out the concept.
Inspired by America’s most infamous prison which housed some of the world’s most difficult and dangerous felons during its operation, Alcotraz will accommodate 30 inmates at a time. The pop-up promises a completely novel bar experience, with drinks crafted without rules or from menus.

Convict customers will enter lockup with their secret stash of spirits to do their allotted time behind bars before their release. All convicts will get their inmate numbers upon arrival, before experiencing (temporary) life behind bars. Once inside, inmates will then be able to sit either in cells or in the visitation area and enjoy bespoke, personalised cocktails made by an expert mixologist, and served in discreet containers to avoid getting caught by the warden.

Alcotraz will run 28 September – 17 December (on Thursday, Friday and Saturday nights). Booking is required, and can be made online at alcotraz.co.uk.

The Beaufort Bar, located in The Savoy hotel is known for its theatrical drinks, and jet black and burnished gold décor reminiscent of late 1920s. Next month sees the launch of the ‘Cocktail of the Moment’ with a new cocktail each month inspired by some of the world’s most-loved books. This starts with a beverage inspired by the magical Harry Potter series, a limited edition cocktail to celebrate 80 years since the publication of JRR Tolkien’s The Hobbit, and finally a drink for the 125th anniversary of Sir Arthur Conan Doyle’s formidable detective.

For more information on The Beaufort Bar, and to book a table, visit fairmont.com. Relaunching this September after an extensive refurbishment, Brixton’s Courtesan is a dim sum restaurant, tea room, cocktail bar and subterranean late-night live entertainment space. Diners should note the all-female produced drinks list at Courtesan, which, combined with modern dim sum hopes to transport guests to a world of exoticism and 1920s Shanghai.

The ‘Lynchian’ atmosphere, inspired by the legendary courtesans of Ancient China, the venue weaves ancient and vintage feminine aesthetics with a futuristic thread. The restaurant and bar, peppered with neon lights and bright red graphics, will be furnished with jade velvet booths and large silk lanterns, and will feature vintage Chinese artefacts throughout.

As the world’s first true ‘female’ wine and spirit list, Courtesan supplies beverages produced or grown exclusively by women. Examples from the cocktail menu include:

Full details on the menu, cocktails and events available at thecourtesan.co.uk.

Not so Dry January with Coupette cocktail kits