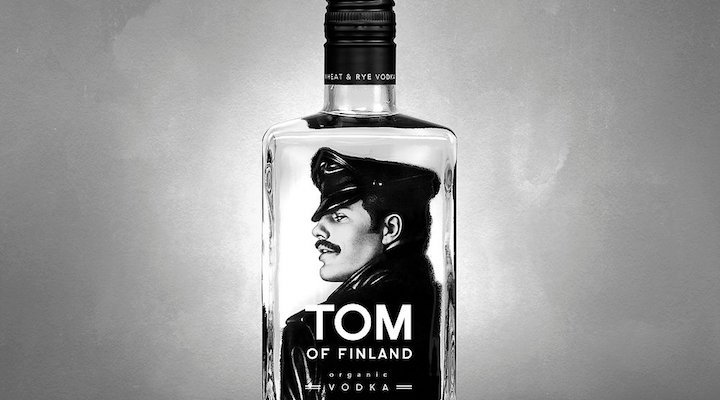 The UK, this month, sees the release of the Tom of Finland film. Tom of Finland follows the story of Touko Laaksonen, a decorated officer from WWII finding refuge in liberating art, specialising in homoerotic drawings of muscular men, free of inhibitions. His work was made famous by his signature ‘Tom of Finland’, an important contribution to the 21st century gay culture. To coincide with the launch, the brand has launched an Tom of Finland organic vodka.

Tom of Finland Organic Vodka is a new super-premium spirit artistically crafted by Lignell & Piispanen in Finland from the finest organically grown wheat, rye and pure arctic water. Bold but smooth, Tom of Finland Organic Vodka is full of character, where the spiciness of the rye is balanced by the softness of wheat and arctic water. The vodka is 100% organic and there is no added sugar.

The masculine bottle liberates the liquid from traditional vodka packaging, reflecting the daring and playful character of the art associated with Tom of Finland.

2017 has been a big year for queer culture including the release of the Tom of Finland film which premiered earlier this year at Tribeca Film Festival in New York. There has also been the Queer British Art exhibition at the Tate, a transgender model starring on the cover of French Vogue and Worldwide Pride taking place in Madrid to mark the 40 years of Pride events in Spain.

Tom’s work has rippled through gay as well as straight culture worldwide, synonymous with freedom of rights and freedom of expression influencing the aesthetic of cultural icons such as Freddie Mercury and trends including modern civil rights movements. Today his work can be seen in galleries around the world, pop-culture and film. Tom of Finland literature and artwork is commonplace in collectors bookshops and metropolitan gay neighbourhoods. Therefore it is fitting that a percentage of profit from each bottle will be donated to the Tom of Finland Foundation, a charity dedicated to promoting tolerant attitudes towards sexuality and the preservation of erotic art.

Tom of Finland organic vodka is available from selected retailers, including Gerry’s Wines and Spirits in Soho, with a RRP of £32.50 (50cl bottle).