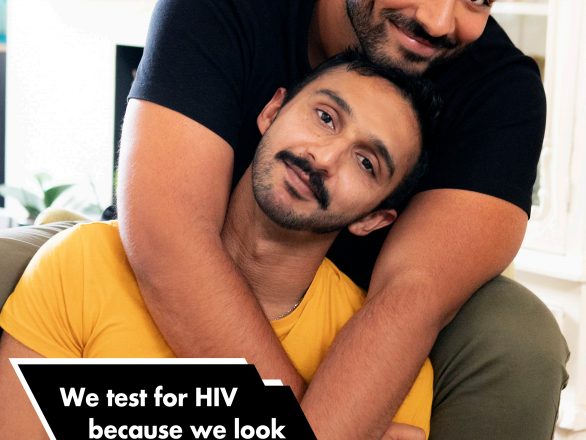 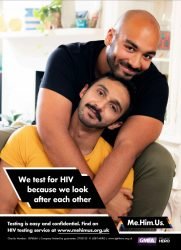 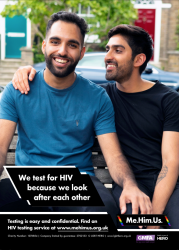 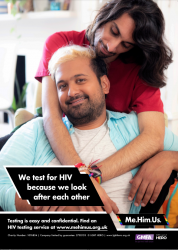 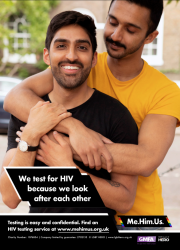 ‘Me. Him. Us.’, the groundbreaking HIV testing campaign from GMFA – the gay and bi men’s health project – is returning to London and across the country, which will be encouraging South Asian gay and bisexual mean to test. The campaign, like its predecessor for black gay and bisexual men, will increase representation of South Asian men in queer spaces and amplify their voices.

“Being South Asian and same-sex attracted can be a delicate balancing act,” says Alexander Leon, one of the campaign’s project leads. “For me, the clash of trying to observe cultural norms while navigating an emerging queer identity was a deeply isolating experience. It seemed impossible to stay true to my authentic self while maintaining a meaningful relationship with my loved ones whose culture or religion sometimes dictated intolerance. What’s more, as I began to come into my own as a gay man, it became achingly evident that there was meagre representation of South Asian gay and bisexual men in LGBTQ+ social spaces and media.”

Alex adds, “To me, this is part of the magic of GMFA’s ‘Me. Him. Us.’ HIV testing campaign – not only does it highlight an important inequality faced among gay and bisexual South Asian men, namely education on and access to HIV prevention strategies, but it’s an ingenious double whammy – we educate our community while showcasing some of its less celebrated members.

“Me. Him. Us. is important because it delivers a crucial message on HIV prevention to a demographic who sorely need to hear it. What’s more, our deliberate choice to place campaign ads in LGBTQ+ social spaces around the country sends a clear message to any South Asian men feeling the particular sense of isolation that comes from simultaneously experiencing homophobia from your ethnic community and racism from the LGBTQ+ community – you, your identity, your life and your choices are valid.”

Ian Howley, Chief Executive of LGBT HERO, the parent organisation of GMFA – the gay men’s health project said, “I’m proud that LGBT HERO is in a position to develop this work in partnership with South Asian gay and bisexual men. It’s important that South Asian men have a platform to create personal and social change in our community. For far too long, these men are an afterthought or used in a tokenistic way. This version of Me. Him. Us. puts South Asian gay and bisexual men front and centre of a national campaign. That’s really important.

RELATED ARTICLE  How will viewers respond to gay Jesus in The Walking Dead?

Ian continues, “Although this campaign is focused on representation, it also has an important message. South Asian gay and bisexual men are more likely to be diagnosed with HIV and at a later stage too. It’s important that we increase the need for frequent testing for HIV and STIs for South Asian gay and bisexual men. At LGBT HERO we recommend that all sexually active men, no matter their background, are tested for HIV at least every six months. Early diagnosis of HIV infection enables better treatment for you and reduces the risk of transmitting the infection to others.”

Visit the Me. Him. Us. campaign for South Asian gay and bisexual men at gmfa.org.uk/Pages/Category/mehimus2

Visit all Me. Him. Us. campaigns at mehimus.org.uk