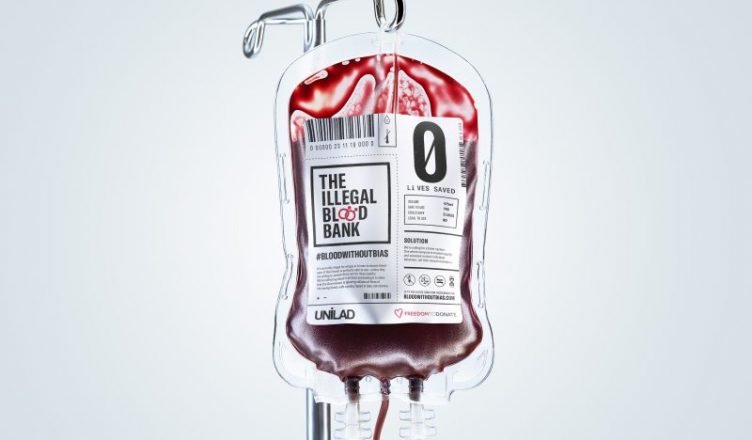 Based at a secret location in London, the Illegal Blood Bank is a partnership launched by UNILAD and FreedomToDonate. It will offer gay and bisexual men the opportunity to donate blood in protest against the current law and to show the viability of alternative, individualised risk assessments as a screening tool.

Though blood donations from men who have sex with men (MSM) are no longer completely banned, as once they were, the NHS still imposes a ban on men who have had sex with men within the last three months. Individual circumstances (such as being in a long-term, monogamous relationship or regularly having sexual health check-ups) are not taken into consideration – which, many campaigners say, is institutional bias.

RELATED ARTICLE  Bohemian Rhapsody: The film, the performance, the tribute

The three-month deferral period for MSM, however, fails to treat gay and bi men as individuals, protestors say. LGBT campaigners believe that MSM who regularly test for STIs should be eligible to donate based on a risk assessment of their individual behaviour.

Rather than having a blanket ban which effectively insists MSM remain celibate for a quarter of a year to donate, they could be assessed based on the reality of their everyday lives, just like heterosexual donors. Assessing individual factors in a risk-based approach, combined with the blood tests that already occur, could help ensure all people who can safely donate blood are able to.

FreedomToDonate and UNILAD have recruited qualified medical professionals to assess individual risk factors, and then take and test the blood to help demonstrate the viability of this process. It is hoped that this protest will show just a fraction of the viable blood that could be obtained if the rules were made fairer.

There has been a shocking 25% drop in blood donations from men over the past five years and a 6% drop in women. Additionally, in order to maintain safe levels of blood, the NHS requires 135,000 new donors each year from a range of backgrounds.

The Christmas season is an especially important time to donate, as people are less likely to do so during the holidays. It can be difficult for the NHS to maintain blood stock from mid-December to early January due to the festivities, dark days and cold weather. Major incidents, such as the Manchester terror attack, also put pressure on local blood supplies.

Almost 60,000 people have signed FreedomToDonate’s petition to show their support for this change in law, which will help to introduce new donors into the system.

Ethan Spibey, founder of FreedomToDonate, said, ‘Our position is simple – anyone who can safely donate blood should be able to. Through our collaboration with UNILAD, we’re aiming to raise awareness of the unfairness in blood donation on a huge scale and demonstrate the incredible potential of those thousands of gay and bi men who could potentially donate through an alternative model.’

Professional rugby player and campaign ambassador Keegan Hirst said, ‘There are still very few professional sportsmen and women who are openly gay. People should be empowered to celebrate who they are but this won’t happen if there are policies in place, which discriminate against certain communities. I’ll be donating blood at the Illegal Blood Bank in the hope it leads to gay and bisexual men who are safe to donate, being able to do so.’

You can raise awareness and show your support by using #BloodWithoutBias on social channels or by signing the petition.

How has the law changed?

Blood donation rules have evolved over the years as the understanding and evidence about risks improves.