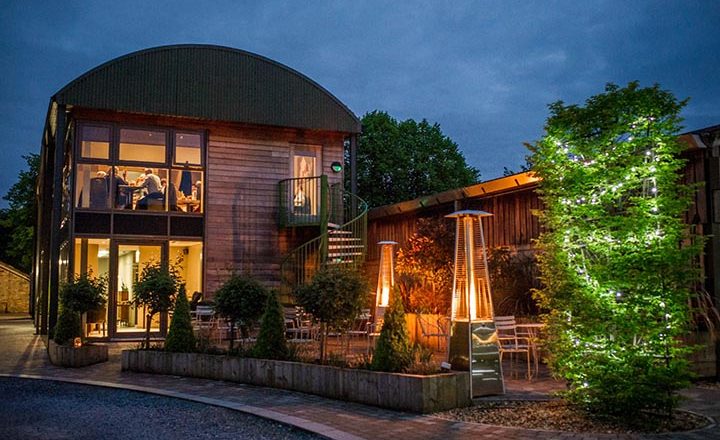 Nestled in the Avon valley on the border of the picturesque Cotswolds, Eckington Manor is a true haven for foodies.

The place is the brainchild of Judy Gardner. Her background in the food industry – she started Garner’s Foods from her kitchen table – meant that when she bought the run down Manor Farm in Eckington in 2004 food was always going to be at the heart of the enterprise.

She has cleverly snapped up Mark Stinchcombe – 2015 winner of BBC’s MasterChef: The Professionals – to head up the kitchen with his wife Sue Stinchcombe. Now this restaurant with rooms housed in both the old manor house and a series of purpose-built annexes also boasts a cookery school and a series of quirky function spaces.

Eckington Manor has already won a string of accolades and was recently named the UK’s ‘Best Hotel for Food’ at the Luxury Lifestyle Magazine Readers’ Travel Awards. And judging by the spectacular food, you can’t help but wonder whether a star from the folks at Michelin isn’t too far off.

Food and drink
To celebrate Eckington’s 10-year anniversary, the Stinchcomes and their team have devised an exquisite 10-course tasting menu using produce from the hotel’s award-winning 260-acre farm, orchard, and vegetable and herb gardens. Words struggle to do justice to what lay ahead of us as we were seated for dinner, but here goes…

The almost clear tomato consommé, which arrived as our amuse-bouche, had a strong yet fresh, clean taste and came with chunks of lobster suspended on a seaweed cracker. So far, so cheffy!

You know a place is good when even the bread and butter forms a course in itself (and warrants mention in a review): the basket has two choices, freshly baked mini-baguettes which even the French would recognise as a baguette (unlike most UK supermarkets’ take on the French staple) and a wholemeal option which was dotted with fennel seeds.

Both worked perfectly with the accompanying ‘chicken butter’ (and came in handy for mopping up some of the delicious sauces and reductions that were to come).

The duck egg starter had the unctuous texture that only slow cooking can achieve with a white as thick and gelatinous as the yolk. The richness was matched by the punchy mushroom sabayon (umami heaven) with a serious truffle hit.

The next starter was perhaps my favourite dish of the night: beef tartare and homemade corned beef took the ‘meat done two ways’ concept to a new level. The tartare was creamy and studded with tiny caper berries. The ‘corned beef’ was about as similar to that which comes in a tin as Coco Pops are to muesli; think of the dreamiest pâté you’ve ever tasted and add tiny, vinegary pickled onions, Marmite mayonnaise (trust me, it really works) and a sprinkling of croutons and you’re starting to get the picture.

The fish course was, for me, less successful. Sea trout with celeriac ‘linguine’ (don’t try and fool me with courgette spaghetti and the like; I know that ain’t carbs, honey!), mussels, apple, caviar and samphire just had too, too much going on. The strength of the mussels overpowered the delicate flavour of the fish, whilst the apple screamed out to compete only after discovered under the celeriac.

The main event (if you can call it that amidst such a symphony of flavours) was a perfectly cooked leg of lamb. It was pink and creamy and served atop a kind of ragù (an intensely savoury reduction of lamb mince with tiny pieces of pearl barley), alongside a generous helping of sweetbreads. An accompanying yoghurt cut through the sweet, fatty deliciousness of the lamp and heritage carrot.

Next came the cheese course in the form of a slab of Wyfe of Bath. It was presented like the most upmarket Ploughman’s’ Lunch you could imagine; decorated with sliced apples, grapes, micro herbs, candied nuts and super-acidic fresh homemade chutney. Delicious!

The first of two – yes, really – desserts was a cheffy stack of dark chocolate, caramel mousse and mascarpone which came with a coffee ice cream; delicious with a cheeky glass of Sauterne. But the really triumphant dessert was the super-zingy and modestly titled ‘apple and blackberry’ which comes in a mushroom-shaped meringue cup with granola and a refreshing, just-tart-enough apple sorbet. Bliss. 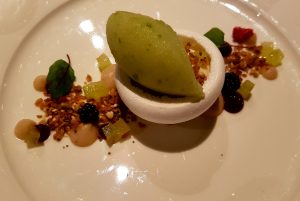 By now our sides were starting to ache but we managed to gobble the lemon and chocolate truffles which accompany the UE Coffee Roasters coffee (our tenth and final course). Reader, we survived!

Some of the other tasting menus come with a wine flight but with the ten-courser you’re left to fend for yourself, which can be tricky with so many different flavours going on. Knowing that we would need both a white and a red to hand we opted for a half bottle of each. A Sauvignon Blanc had the grassy kick to compliment the buttery sauce of the trout, and also went well with the duck egg. With the beef, lamb and cheese we reached instinctively for the red, and weren’t disappointed by a young and reasonably-priced Côtes du Rhône.

Look and vibe
The dining room takes up around half of the top floor of a purpose-built modern barn, which is shared by the cookery school. Accommodating 38 covers, it is decorated in a grey palette and dominated by a dramatic magnolia-tree wallpaper, which adds a modern oriental vibe. Large pine-framed windows look out onto the gardens and courtyard, and views of the Worcestershire countryside beyond.

The tables and chairs were a little of a let down in that they don’t create an interior to successfully announce the seriousness and aspirations of the food. Breakfast is served in the same room where the highlight was the home-made apple juice (which you can also purchase to take away). The full English didn’t disappoint either; and managed the feat of being a fry-up which left not a trace of excess fat on the plate.

The clientele at dinner was mixed in age; mainly couples who had travelled to sample the famous food or locals treating themselves (like our neighbours celebrating their wedding anniversary). But there were also business folk canny enough to realise that if you add a little to your expenses allowance, you can have a very different experience here compared to one of the corporate chains.

Accommodation
This is a restaurant with rooms rather than a hotel, per se. The Reception closes at 6pm, there are no telephones in the rooms and you have to trek to an (admittedly stylish) kitchen area in the Manor House for the use of an iron or ironing board. So provided that’s what you expect you won’t be disappointed. You’re coming for the food anyway, right?

The accommodation varies from the old style charm of Elizabethan rafters and wonky walls in the Manor House, to exposed green oak beams in the modern-country Cyder Barn. There are also more modest standard rooms set along the wall across the courtyard from the restaurant and cookery school.

We stayed in one of the ‘Deluxe’ rooms, up in the eaves of the Cyder Barn. It was dominated by a huge free-standing bath which was double-ended and big enough for two (easy, tiger). There was also a practical en suite shower room with Fired Each fixtures, piles of fluffy towels, White Company toiletries and a seriously powerful shower (would-be shampoo divas should try it at night with the colour-changing lights for full disco effect).

The super king-size bed with white Egyptian cotton linen made for a great night’s sleep. And the essentials are taken care of with flat screen TV, DVD player and complimentary wifi, whilst quirky design touches like the gold-branch-legged bedside tables kept things fun.

Price
The ‘Ten Years of Fine Dining’ 10-course tasting menu costs £90 per person. You’ll need to factor in drinks and service too. Double rooms from £179 to £279 per night.

The bottom line
A blissful escape from city life in the Worcestershire countryside where the food is the star.