In the LGBT community, there are shining beacons of success when it comes to big professionals and business executives. Joel Shimkhai, CEO of Grindr; Terry George, the self-made businessman; and Benjamin Cohen, publisher of Pink News, are all good examples.

With general positive attitudes today towards diversity, we are lucky in some respects that there is a greater drive for diversity among company executives – but are those at the top really as diverse as the rest of society?

We at Vada wanted to understand whether identifying as LGBT can make you more (or less) successful in business. The latest OUTstanding list of Top 100 executives shows very positive progress and with initiatives such as InterLaw and InterEngineering acting as support networks, there is clearly progress in LGBT diversity in the number of business executives. However, more can be done, specifically outside of the major cities, where these networks have much less, if indeed any, influence.

Far away from the City executive lifestyle, based in the middle of the North Yorkshire Moors, we met with the married, gay owners of start-up Indi Clothing Company Ltd., Graham Kennedy and Tommy Taylor, to understand whether being gay has helped them be more successful in business.

Good morning, guys. Thank you for taking the time to talk with us. Before we get down to business, as it were, we’d like to know: how did you meet?

We actually met on Facebook, slightly more traditionally, before the likes of Tinder or Grindr. When we decided to get married, ours wasn’t a traditional proposal – it was more of an adult conversation. After discussing it over time, it seemed like a natural evolution from being in a long-term relationship together.

Yes we know several gay couples. We know one other gay business owner in the area, who runs a cleaning company – so not in competition with what we do.

With our startups we’ve not necessarily found that we’ve needed any outside support (except financially from each other) as we’ve not had significant competition in their business areas in the local area.

And what companies do you run or have your started up?

We own three businesses and companies between us. I [GK] run a mobile hair stylist business; there’s Indi Clothing Company, which we jointly run and are actively growing; and Tommy also runs Amicus Design Studio, a website and graphic design business.

What roles do each of you have across the three companies?

[GK:] We support each other for our individual businesses and Indi Clothing Company, that we’re building together. For example, Tommy produces all the branding for my [GK] mobile hairstylist company.

[TT:] And Graham looks after the marketing and finances for Indi Clothing Company and Amicus Design Studio, as that’s where his strengths lie.

And how did the creation of theses three businesses come about?

[GK:] I trained as a hairdresser, and didn’t like the idea of working for another hairdressing company that would take the credit and profit for my skills, so I decided to start my own business instead.

Being in control of our own business gives us full control, particularly around branding. We’re very particular about the individual style we have, and have become known for locally and don’t want others to take credit for it.

How do you see Indi Clothing Company growing?

The basis of the company is to translate our creative designs onto clothing, to sell as fashion. We recently started a new process (screen printing) for our products so are looking forward to seeing how this advanced technique (compared with what we used to use) improves the quality of our products and sales.

For the time being we see us as being in control of the company as it continues to grow; however we wouldn’t rule out a sell out. If and when this happened, we would want to be a part of managing the company and having creative control.

What are the advantages, if any, you see about being gay and being an entrepreneur?

[TT:] I wouldn’t call myself an entrepreneur per se. I look at it as developing a business out of a passion I have. Knowing I was gay from a young age, I’ve always wanted to find a different way to express myself. I’ve harnessed this creative self-expression and used it in our businesses.

[GK:] When we were growing up or even when we were just starting out, neither of us really imagined that we could or would be running a business. But since we’ve been together and supported each others’ businesses, it’s been a natural progression to where we are now.

What advice do you have for young entrepreneurs starting up their own companies?

[GK:] If you have the drive to start a business, have the confidence to keep going through the difficult times to succeed.

[TT:] It’s important to design your brand early, and make sure this is consistent across all your communications to customers. 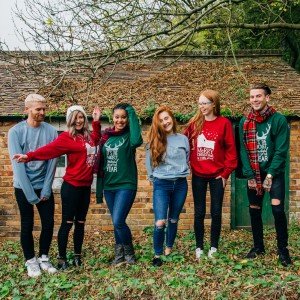 And where can our readers go to purchase products from Indi Clothing Company?

[GK:] Everything is available online on the website indiclothing.co, and for Christmas we’ve just launchedtwo exciting new T-shirts and three jumpers.

10 thoughts on “Does being LGBT bring a different approach to business?”