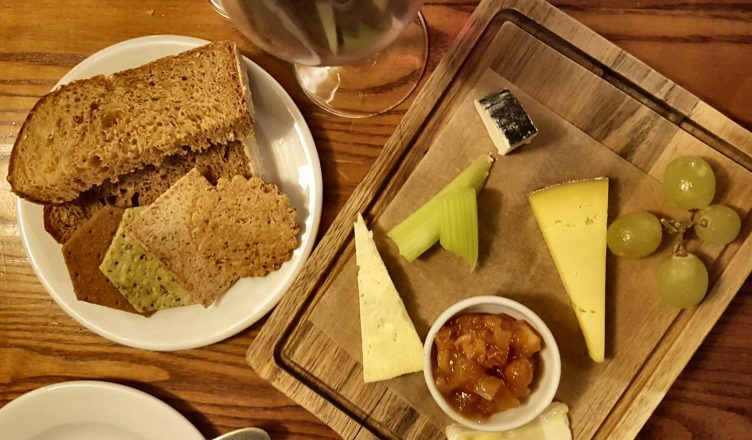 Situated in the centre of the picturesque village of Letcombe Regis in the Vale of the White Horse in South Oxfordshire, the Greyhound reopened as a free house in November 2015 after village locals Catriona Galbraith and Martyn Reed bought this once run-down eighteenth-century inn. The couple spent the next year breathing new life into the historic building and grounds to create a true community hub which now welcomes locals and style-conscious foodies from further afield.

To get you going the olives and bread selection are well worth trying. The latter includes not just a great homemade soda bread and a focaccia, but a really special apricot and wholemeal concoction.

To start we opted for the the duck ham, and the Inn’s famous twice-baked cheese souffle, which I’m told is a favourite with regulars. The duck – if you haven’t tried this before – doesn’t actually contain ham but is prepared and cured as if it were ham. It comes in slivers (a little like pancetta) but with the rich, gamey taste of duck.

The plate arrived filled with vivid colour thanks to pickled blackberries, slices of beautiful beetroot and distinctive yellow heritage potatoes and was packed with earthy, smokey and sweet tastes. The famous souffle is made with Leonard Stanley Gloucestershire cheese and comes with cheesy ‘rarebit onions’ (this is like rural French cuisine at its best) and an accompanying kale salsa verde was tastier than it sounds, and cut through the sweetness of the souffle perfectly.

For mains we opted for veal and guinea fowl. The veal again had a French twist thanks to the accompanying beans, cavolo nero, and smoked tomato – and a kick of lemon lifted the whole dish. With a perfectly cooked piece of veal rump, the dish was was like ‘autumn in the Med’ on a plate.

However, the show was stolen by the fantastic guinea fowl which has to be one of my dishes of the year. It was a generous portion and came with a fantastic garlic and buttermilk puree, roast lettuce (I’m not usually a fan but it worked so, so well here), chunks of sweet corn served on the cob, beige-but-fabulous wild mushrooms which were bursting with flavour, and a super-aniseedy lemon and tarragon Dauphinoise potato.

With so much going on it shouldn’t really work but my goodness it really did!

Carried away by the French influences in the food, we decided to share a cheese plate before moving to desserts. These – all from the UK – included a creamy yet crumbly Cornish Yard, an earthy Devon Blue, and (my favourite) a Cerney Ash which is a Valencay-type cheese made in Gloucestershire coated with an oak ash and sea salt mixture imported from France.

The Hampshire Tunworth was also seriously good and served this ripe would give any Camembert a run for its money! 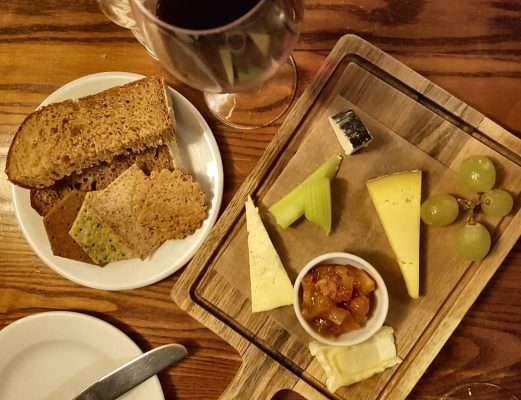 The blackberry ‘trifle’ looked fantastic but was a little bit of a disappointment. It comes ‘deconstructed’ and strewn with edible flowers but the sponge was dry and I couldn’t detect the bay in the promised ‘bay custard’. 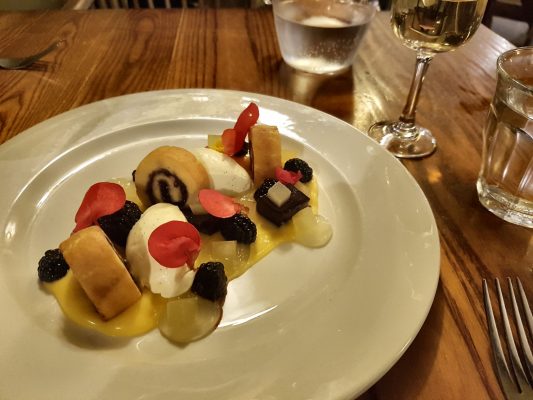 There are also all the traditional pub classics to choose from including beer-battered haddock and chips, and a beef burger with bacon jam (it looked amazing arriving at a neighbour’s table on a brioche bun).

To drink we tried a 2017 Spanish Tempranillo and Garnacha blend which had just the right amount of spice to stand up to the strong flavours of the food (and helped us with the cheese). A cheeky glass of Chateau Poulvere Monbazillac complimented the blackberry ‘trifle’ perfectly.

The light-filled bar has a modern rustic vibe. This is ‘paired-down country’ and unfussy (no horse brasses and dried flowers here) and it feels cosy without being over-styled.

It’s super dog-friendly (perhaps a nod to the Inn’s name); there are plenty of water bowls around and doggy treats are available at the bar. 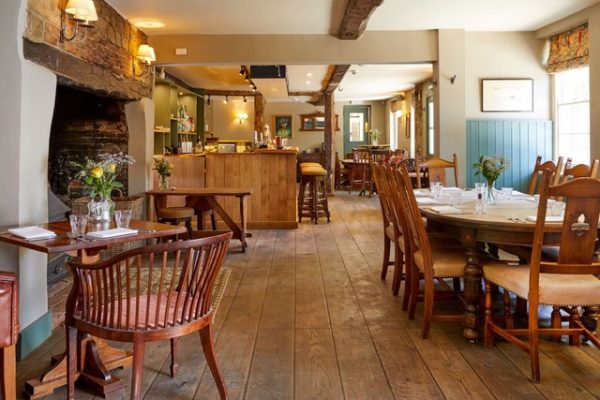 The bar was packed (mainly with diners) when we stayed on a Saturday night and this is clearly a place with a loyal local following – and having tried the food I can see why. There were a mixture of couples and larger, dressier groups marking special occasions.

And if you’d like a more intimate experience there is a beautiful scarlet ‘nook’ that can be screened off as a private dining area. There are also two further dining rooms seating up to 60 and a private dining and meeting space which can accommodate up to 14.

The diversity of diners is reflected in the menu, which includes both casual-dining pub classics and the more ‘cheffy’ fair you’d expect for ‘occasion dining’.

The service is not just welcoming but also genuinely friendly and helpful; both our waiter and front-of-house host Lidia Dhorne patiently and knowledgeable answered our numerous questions about the menu and took care of our every need.

We stayed in the Oxford suite (each of the rooms is named after a local town or city) which is up the the eaves and boasts bags of character. It’s perhaps a stretch to call it a suite but it does have a separate little TV nook between the bedroom and the bathroom with a big comfy sofa and stacks of cushions and throws.

Since the weather was atrocious when we visited, this proved a welcome place to snuggle up.

British-made Bramley products in the bathroom included a selection of bath and shower gels as well as shampoo, conditioner, and hand and body cream in big help-yourself-but-don’t-take-home sizes (they’re available to buy from reception).

Peculiarly, there’s no shower. But the fabulous double-ended bath surrounded by exposed beams made up for that, and offered a luxurious soak before climbing into the suite’s divine Hypnos bed.

Breakfast is cooked to order (no heat lamps and rubbery eggs here) and includes lots of homey touches including homemade raspberry jam and granola as well well as freshly squeezed orange juice and cloudy apple juice.

In the Full English even the sausages are homemade and pack a peppery punch, whilst the bacon is super-smokey and streaky. The black pudding is also worth a mention – it had an open, grainy texture and an iron-rich tang. 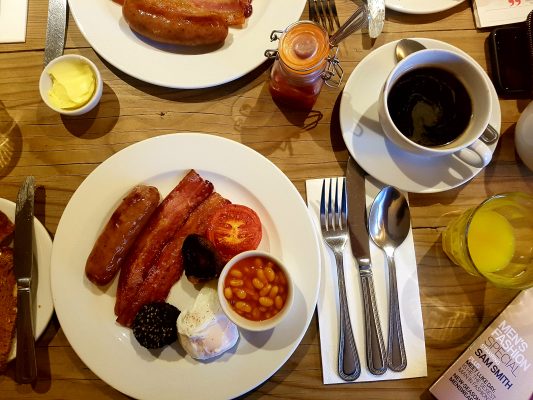 Expect to pay around £40 per person plus service, based on a starter and main each and a cheese course and pudding to share, with bread, olives and a bottle of wine. Rooms range from £90 to £140 per night B&B for two people year-round.

Also look out for the fixed-price lunch menu, regular pizza evenings with live music and a monthly Sunday pub quiz.

Not just your average ‘inn with rooms’, the fabulous French-inspired cuisine makes this a true foodie destination.