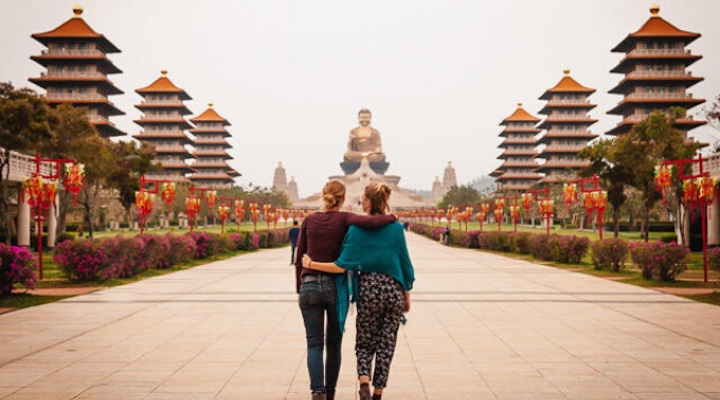 IGLTA, the leading network of LGBT tourism businesses, recently published its detailed travel guide to Taiwan. This peaked our interest for a visit, so here are five reasons from the travel guide why Taiwan is an LGBT destination to consider next.

Taiwan is considered one of the most LGBT friendly destinations in Asia. Taiwan was put on the map for many LGBT  travellers on International Day against Homophobia, Transphobia and Biphobia 2019, when it became Asia’s first country to legalise same-sex marriage. The country has never had laws against homosexuality, and is one of the few countries in Asia that has anti-discrimination laws based on sexual orientation, gender identity and gender characteristics. In addition, Taiwan is the world’s first country to have a gender-diverse minister.

The capital city, Taipei, is located in the northern part of the island and has the nickname ‘San Francisco of the East’ for its welcoming character. Ximending is the area to hang out, as it’s the gaybourhood. LGBT visitors will find many gay bars at the square behind The Red House, and the area of ShiDa night market is the go-to place for lesbians.

RELATED ARTICLE  Vada guide to Hawaii - part 1 - Where to stay

New Taipei City feels less like a city, it’s the surrounding area of Taipei. Popular places to visit are:

For the best of the LGBT scene, Taipei is the best city, home to Asia’s second-biggest Pride celebration: Taipei Pride – in 2018 an estimated 130,000 people marched through the streets of Taipei. There are smaller LGBT scenes in other cities too, and events worth planning a trip to Taiwan for:

Nature lovers and those who love to be outdoors will find plenty to explore on the island of Taiwan. Taroko National Park is one of Taiwan’s most famous national parks, and the most-visited spot in the park is the Taroko Gorge, a white marble canyon. The park takes its name from this landmark. While exploring the park, travellers can dip in a wild hot spring, Wenshan Hot Spring, and walk through the Water Curtain Cave.

Sun Moon Lake is Taiwan’s largest lake, located in the mountainous center of Taiwan. The Thao aboriginal tribe lives on the shore of Sun Moon Lake, and its name comes from the shape of the lake, which is sort of sun-shaped in the east and moon-shaped in the west. Boat tours on the lake and bus tours around the lake are available, as is a ride on a ropeway.

Yangmingshan National Park, north of Taipei is home to a dormant volcano, hot springs, and sulphur deposits, meaning it is has a striking landscape, and during the flowering season (February and March), rhododendrons and cherry blossoms colour the mountain slopes. There are many marked hiking and bike trails, so very accessible.

Kenting National Park is unique. This national park at the southern end of Taiwan is famous for its beaches and blue waters, perfect for surfing, swimming, snorkelling and diving. The area is also great for bird watching and cycling.

Taiwanese cuisine draws on influences from Japanese and Chinese cuisine, specifically southern Chinese regions. One of Taiwan’s specialties is soup dumpling, Xiao Long Bao. These aren’t just dumplings, their thin skin and filled with tasty broth and meat, fish and/or vegetables. Although Xiao Long Bao originates from Shanghai, the Taiwanese have perfected the dish, and the best restaurant to eat the soup dumplings is Din Tai Fung, on Xinyi Road in Taipei.

Another must-try dish is Taiwanese beef noodle soup. And then there is the now world-famous Bubble Tea. Since its invention in the 1980s, Bubble Tea has become increasingly popular across the globe. This tea-based drink with milk, sugar (optional) and chewy tapioca pearls is definitely worth a sip in its country of origin.

RELATED ARTICLE  Round-up: Where to stay in Cornwall this summer