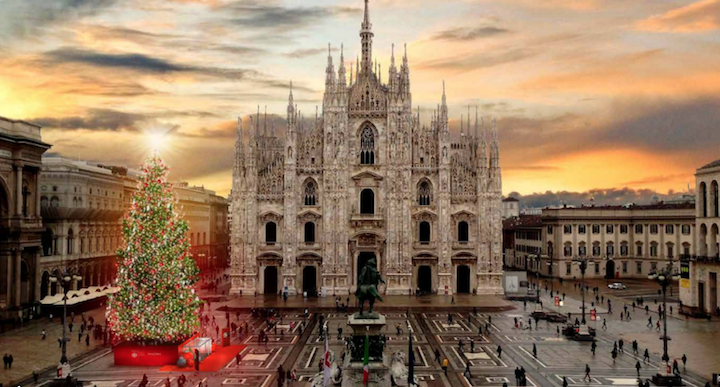 Milan, the fashion capital of the increasingly culturally liberal Italy has many things to amaze tourists, from high luxury fashion to food, and a variety of festive traditions. Here at Vada we round up five reasons to visit this beautiful city during the Christmas period.

Refined attention to detail is apparent in the window displays put on by the major fashion and luxury brands in the Fashion District (between Via Monte Napoleone and Via della Spiga). Those window shopping will be as impressed as those looking to purchase.

A short distance away, are the romantic streets of the Brera District, a procession of shop windows where Milan’s storied brands alternate with new boutiques. The most popular names in international fashion are on Corso Buenos Aires, a real ‘city mall’ spread over one of the longest outdoor shopping streets in all Europe.

Alternative design, second-hand and street wear outlets make their home at Porta Ticinese, an area to be discovered while strolling among the columns of San Lorenzo and the Naviglio Grande canal, which will be lit for Christmas holidays.

On 7 December, Milan will draw on its ancient soul to celebrate its patron, Saint Ambrose. Lovers of traditional craft markets can visit the Oh Bej Oh Bej market stretching along the walls of Castello Sforzesco, which will offer visitors special products, sweets, handicrafts and glasses of vin brulé (mulled wine). The name ‘Oh Bej Oh Bej’ evokes the joyous exclamations of the children when seeing the products on sale.

From 1 December to 9 December the Rho Fiera Milano Exhibition Centre will host the fair dedicated to Italian and international craft called L’Artigiano in Fiera. This is an ideal opportunity for buying a special present among the many stands or tasting food and wine produced from all over Italy.

Milan has a special (and possibly unique) way to celebrate the arrival of Christmas: with a Musical Advent Calendar. Each day, from 1 December to 24 December at 18:30, the windows of the buildings that line Piazza del Duomo become an evocative setting for exciting musical performances and shows. This year the public will be treated to a spectacular video-projection that will transform the facade of the Palazzo dei Portici Meridionali in Piazza Duomo into a big screen.

Christmas would not be Christmas in Milan without the traditional Panettone Christmas cake, a local speciality appreciated all over the world. According to the legend, this cake, filled with raisins and candied fruit, came about in the 15th century by an apprentice cook at the court of the Duke of Milan, whipped up in a hurry to make up for a dessert that went wrong.

The traditional local cake, in all its various forms and versions, will be available for tasting throughout the Christmas period in various restaurants, hotels, bakeries, traditional eateries and Christmas markets. The tasting experience will come to a climax on 16 December when Galleria Vittorio Emanuele II will offer the public an artisanal chocolate-covered Panettone baked by the renowned maître chocolatier Davide Comaschi. The 2018 Panettone is planned to be the largest ever. To put that into perspective, last year, the Panettone’s predecessor weighed approximately 140kg and was enough for over 1,000 people.

Over the years, Christmas lights have come to be one of the areas where artistic and creative tradition and innovation are most successfully combined. The lighting of the big Christmas tree in Piazza del Duomo will mark the official beginning of the Christmas festivities and will signify the turning on of other lighting installations all over the city. Spectacular lighting installations will be set up throughout Milan, from Piazza della Scala to the vault of Galleria Vittorio Emanuele II, all the way to the city’s furthest edge, wending their way to the sites involved in the ‘Luci a Milano‘ project that will be transforming a number of squares into a sprawling artistic Christmas light show.

Of course it goes without saying that dotted around the city (from Darsena to Porta Venezia), there will be several Christmas Villages, that will welcome all families with many attractions, shows and surprises for any age. Ice-skating rinks, Santa’s sleighs, workshops, dancing, and face painting.