New in town? Well fear not! Our heroic publisher reports back with this insider’s guide, so you can bluff the know-how to navigate Manchester’s Gay Village.

Canal Street is the heart of Manchester’s Gay Village, just a stone’s throw from both Oxford Road and Piccadilly Train Stations. Simple stride out the Piccadilly entrance, cross the bridge, and find yourself on the friendly cobbles of Canal Street.

Velvet Hotel is above Velvet Bar and Velvet Restaurant. Sister bar Velvet Central, on Mount Street, can be found at the other end of town. Velvet Hotel is an independent, gay-owned and gay-run boutique at the top of Canal Street. It offers 13 luxurious king suites with bonkers but fabulous design. The hotel is fit for a queen, with room rates starting at just £85 and rising to over £400 per night at peak times.

Le Ville is a fairly priced but well presented hotel. New to the village, it replaced the budget Eazysleep, and is a welcome addition to Canal Street. Le Ville has some of the comfiest beds you’ll find in any Manchester hotel, with knowledgeable and friendly staff, and very reasonable room rates. Nice touches include blueberry muffins, huge in-room TVs and the informative but personal greeting on arrival.

The Rembrandt Hotel, above REM Bar, is a B&B located above one of Manchester’s oldest gay bars. With super-cheap room rates starting at £45 per night, REM is popular with clubbers looking for somewhere to rest their heads and wash their hair, or with business types who just need a pleasant, conveniently-located place to stay for the evening. The Rembrandt Hotel is a firm favourite of many LGBT travellers to the city.

The Molly House serves up Spanish and Latin American tapas. It also boasts one of Manchester’s most impressive ranges of alcoholic drinks. Expect beers such as Delirium Tremens, Banana Bread Beer and Raging Bitch. Cocktails include the Corpse Reviver, Warsaw Cooler and Basil and Honey Daiquiri.

Room has an inspired a la carte menu, with a great location that offers good views of the city centre, and fabulously overstated interiors. The set menu, though, is generally considered to be disappointing, so should be avoided at all costs. It’s certainly worth paying the extra price to order from the a la carte.

The Richmond Tea Rooms is an eccentric tea room with an Alice in Wonderland theme. It’s known locally for its scrumptious baked cakes and its wide range of teas (plus a few cocktails, of course). The tea room is all cushions, whacky artwork and chequered tables cloths. The indoor glasshouse and gazebo only add to the unusual charm.

‘Christian Dior: Designer in Focus’ at the Gallery of Costume at Platt Hall (Rusholme)

RELATED ARTICLE  Are You "Out" at Work?

This former 18th-century textile merchant’s home currently houses the vivid and fabulous ‘Christian Dior: Designer in Focus’ exhibition, which runs until January 2014. The exhibition features early designs from 1947 to more recent designs from 1984.

Harry Goodwin’s exhibition is a retrospective of his time as the resident photographer at Top of the Pops. Here he exhibits 60 images from the show’s heyday, capturing the mood of pop music in the 60s and 70s. The exhibition features a veritable who’s who of stars from the era

Taurus is a popular bar, with a focus on the local community. The owners regularly make an effort to provide events and entertainment for the Village, as well as running the highly successful Canal-St.co.uk website and the Canal Street VIP discount card.

The Thompson’s Arms is an old favourite in the Village. On Thursdays you can catch Miss Thunderpussy in her weekly show, which largley consists of wickedly funny cover songs and the odd Sister Act sing-along. Cheap drinks are on offer all day, every day, and the sheltered smoking area makes it a firm favourite with fag-lovers come rain or snow.

On the 7th (The Landing, Blue Tower, MediaCityUK)

On the 7th is a VIP bar, restaurant, events space and cinema. Based at MediaCity UK, On the 7th is famed for its private suites, complete with TVs, iPod docks and laptop jacks. On the 7th also has its own snug cinema, where you can catch indie films or screen business presentations. This is a taste of luxury and style any self-respecting queen should try!

Cruz 101 is a bustling, and long-lived club on the very edge of the Village. It was also the setting for the fictional Babylon nightclub in Queer as Folk. Cruz 101 hosts Back2Back, where Poptastic teams up with Cruz to bring you the best in chart tunes till dawn. Aftershock is their weekly Saturday extravanga, especially for dance connoisseurs. Cha Cha Boudoir is a monthly cabaret night with a twist, hosted by Anna Phylactic and Cheddar Gawjus on the last Friday of every month. Drag queens compete for the audience’s drag dollars to be crowned ‘queen of the night’. 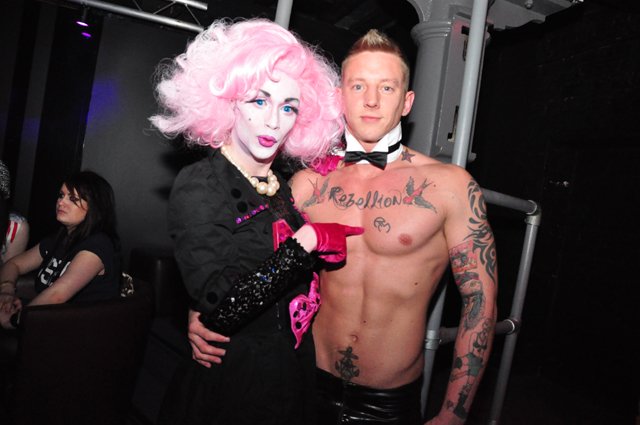 Poptastic is a night of pop and indie in the subterranean depths of Alter Ego, and home of the original Shag Tag. Catch club fashionistas, alternative kids and keen students on the dancefloor every Tuesday and Saturday, with cheap drinks and Cheeky Vimtos galore!

AXM is always packed come morning. Its lit-up dancefloor, poser’s catwalk and sexy barman means many a Village clubber heads down to the club to finish off their night. AXM was awarded Boyz Magazine’s ‘Best Bar for North England 2012’ accolade and deservedly so.